I got up early the next morning, hoping for some sunrise views on my way to the Scoville Point.  The trail is a little different.  Kind of shaped like a U with the two ends starting and ending at different places in the Rock Harbor improved area.  From the bottom of the U, at the closest point to Scoville Point, the trail is a single track out to the point and back.  Anyway, I took the leg of the U along Rock Harbor out, and the Tobin Harbor trail part of the U back. 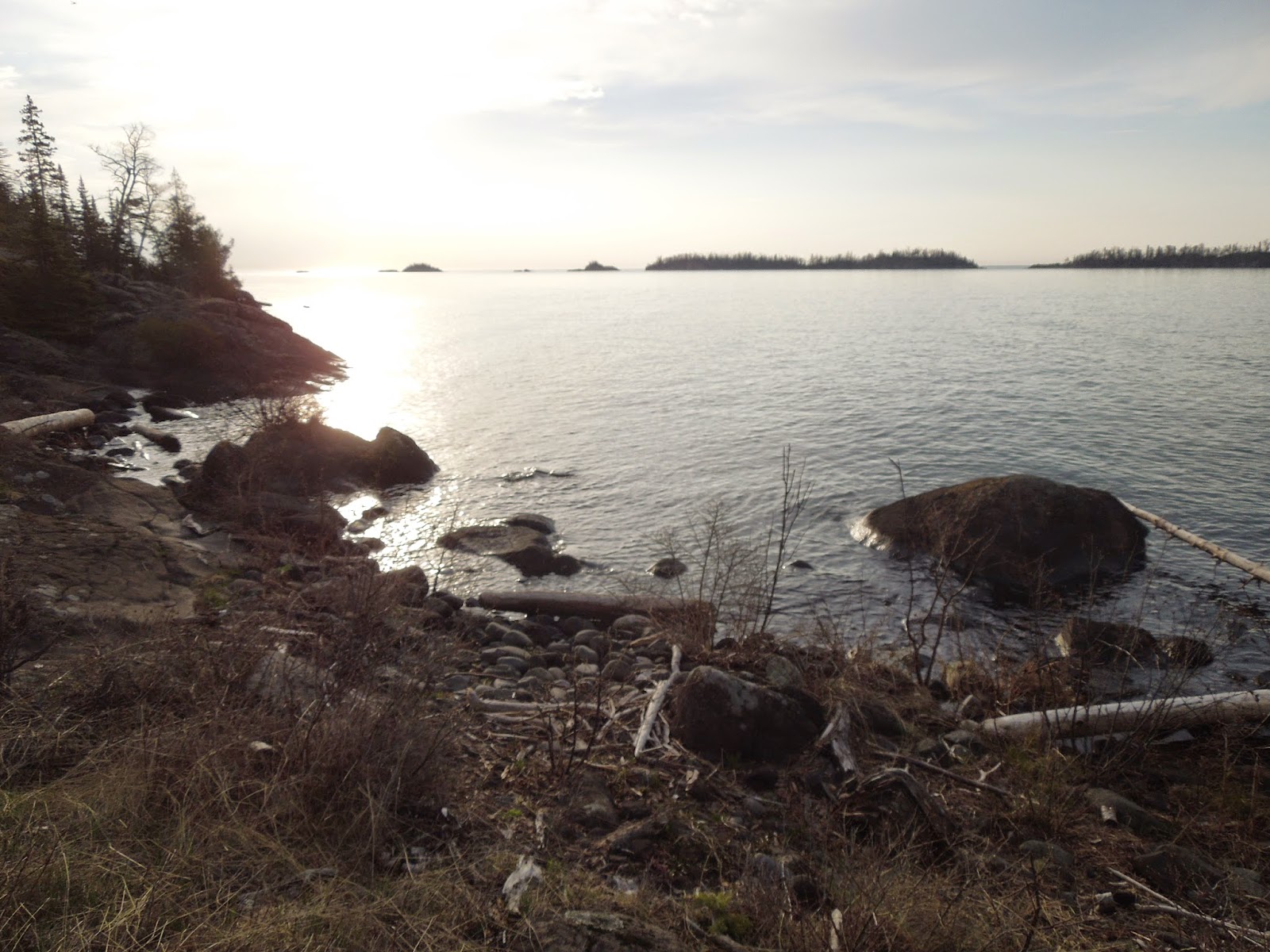 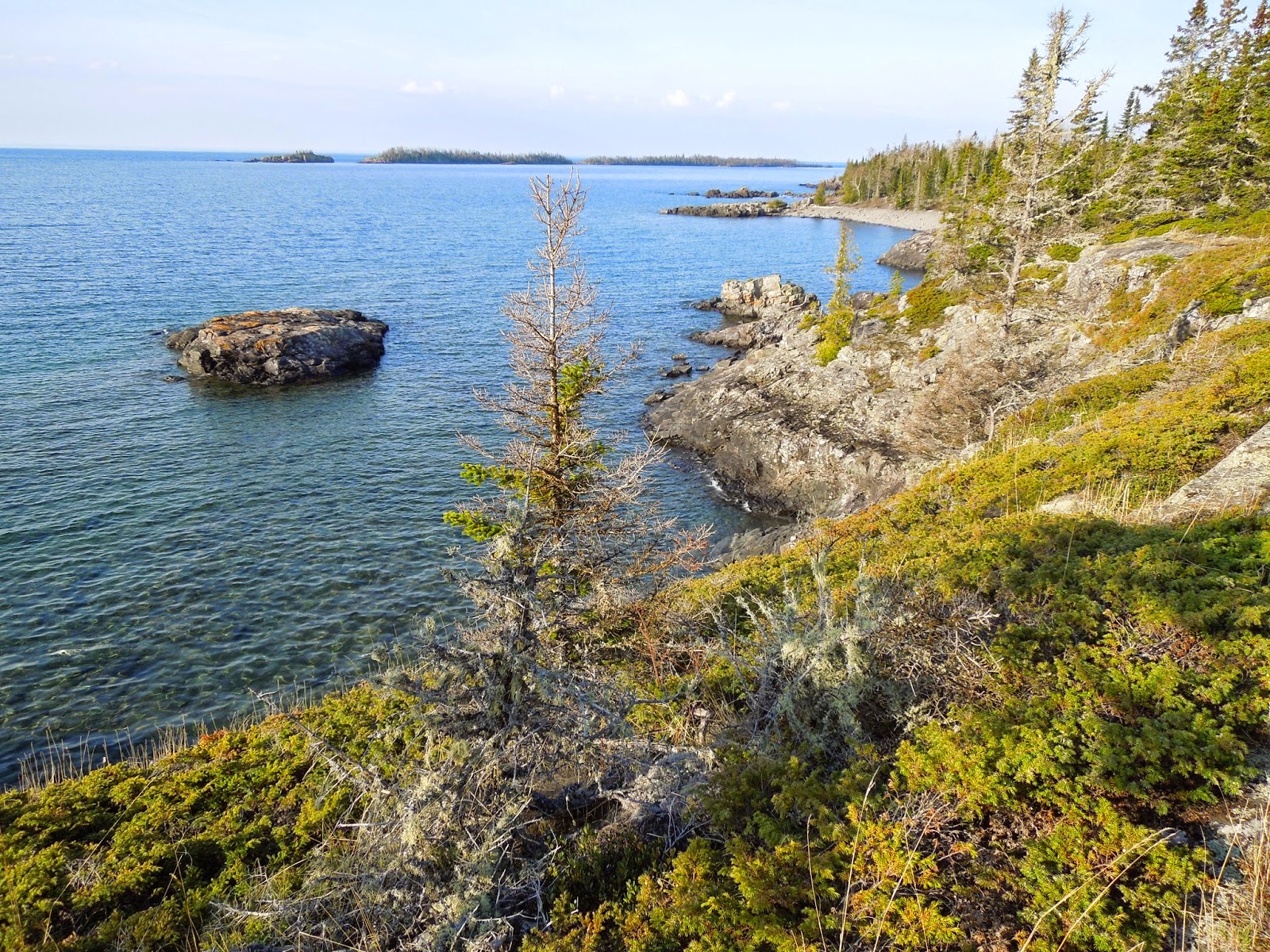 I was surprised that the Rock Harbor part of the trail was actually pretty rough, and it still had blow-down!  I had expected something manicured for the lodge residents.  The single track out to the point was mostly on rock, and the trail actually disappeared.  But there was only one direction to head.  A hundred yards or so from the point, I was passed by a young female.  She got to the point and started doing push-ups on a flat area.  I intruded a bit to explore the overlook at the point, and found out she was a park employee.  I left the point while she was still doing calisthenics. 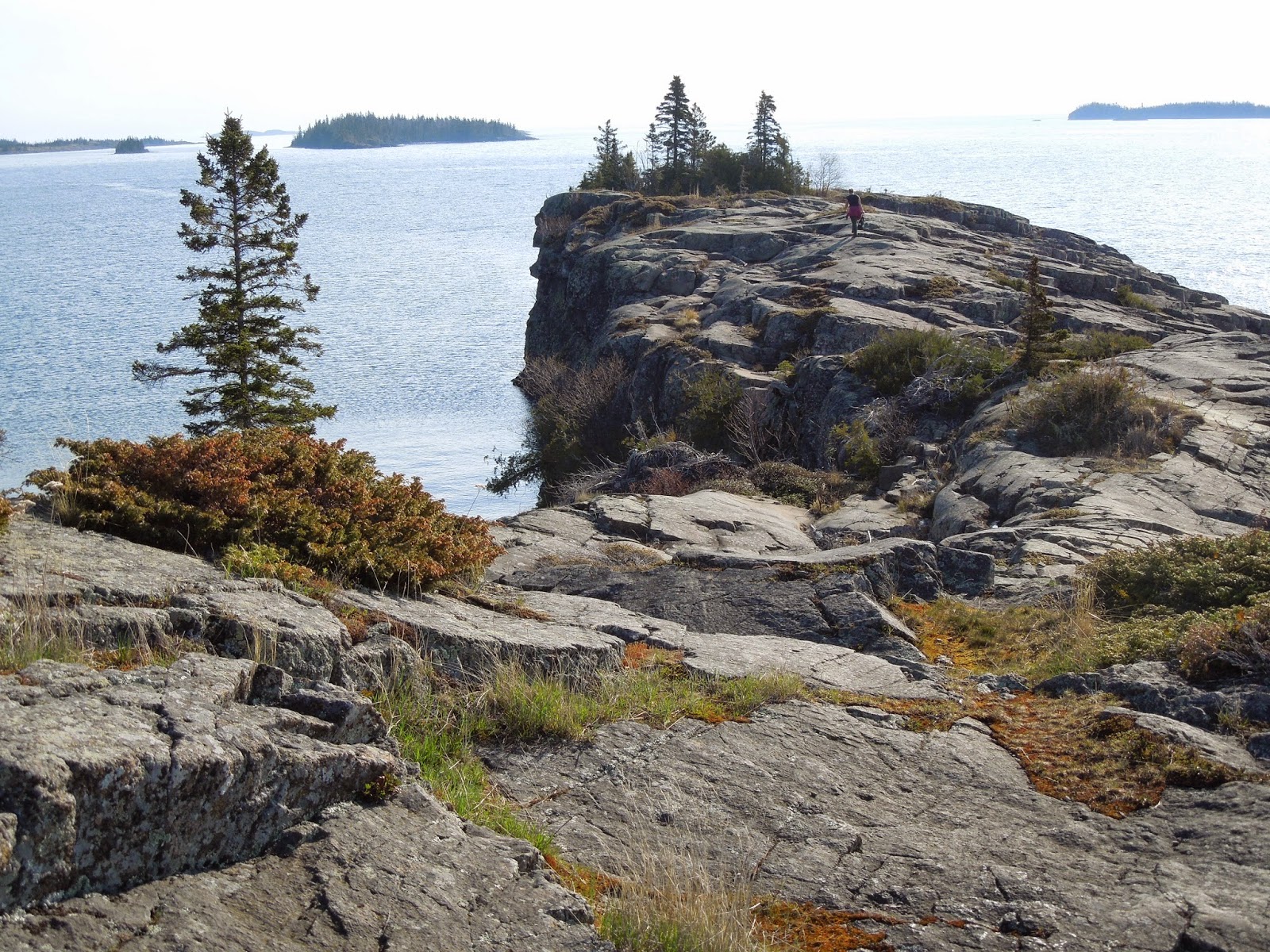 Back on the Tobin Harbor return trail, I stopped for a drink of water.  She caught up with me again, and stopped 10 feet or so past me.  She pointed out some small orchids on the side of the trail.  I stayed behind to take some photos. 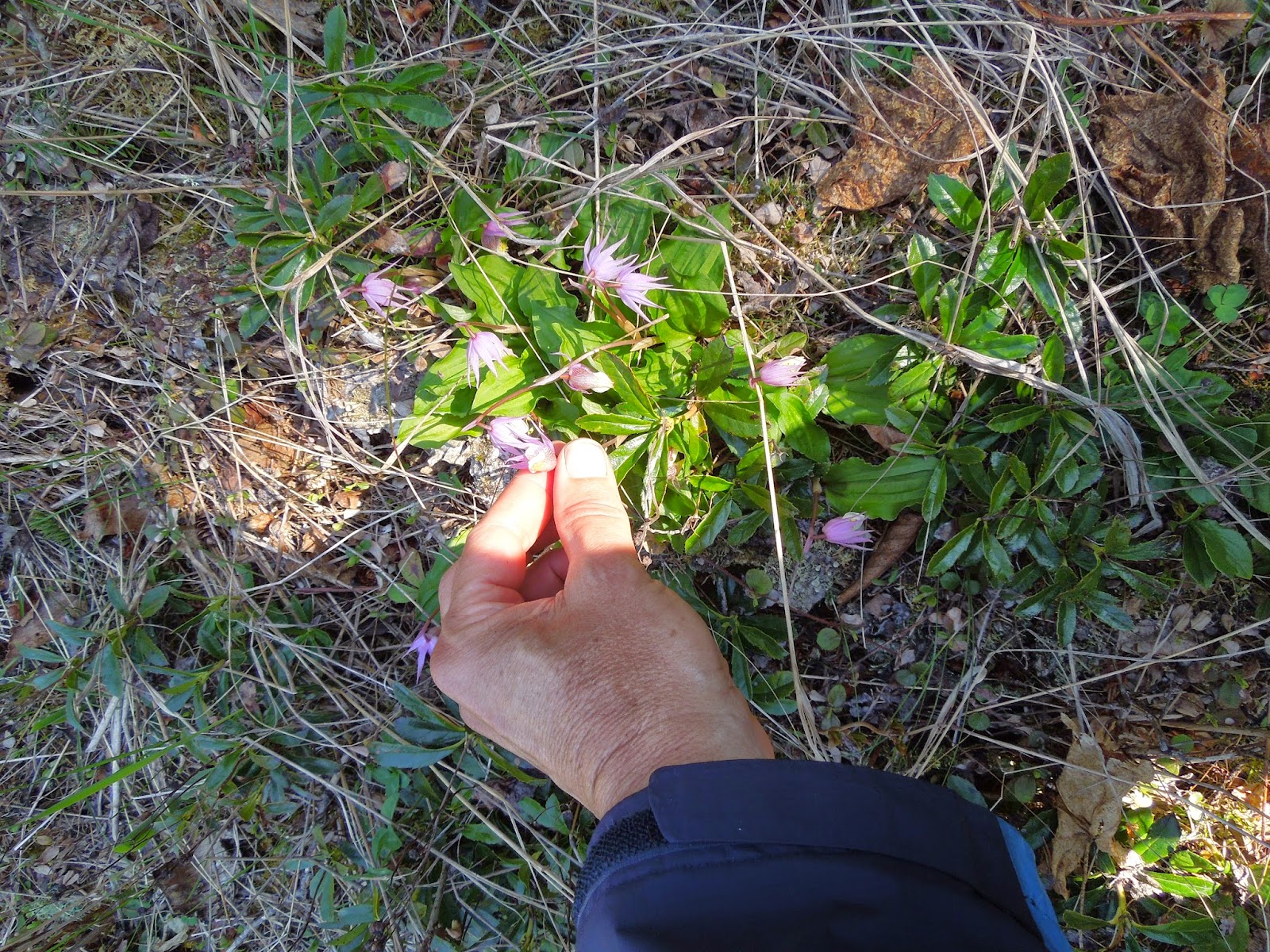 A while further down the Tobin Harbor trail, I was passed by another single day hiker.  He looked like he was just doing the U, and was moving along fast!  I did stop to look at some old mine areas.  Like those I had seen earlier, the NPS had put wooden fences around the pits.  I saw those on the trail near Daisy Farm too.  There the NPS has put up signs warning that you needed to use extreme caution.  Not sure why when they put fences around each pit.  Also, the pits looked like nothing more than 15 foot wide depressions that had filled up some with rain water. 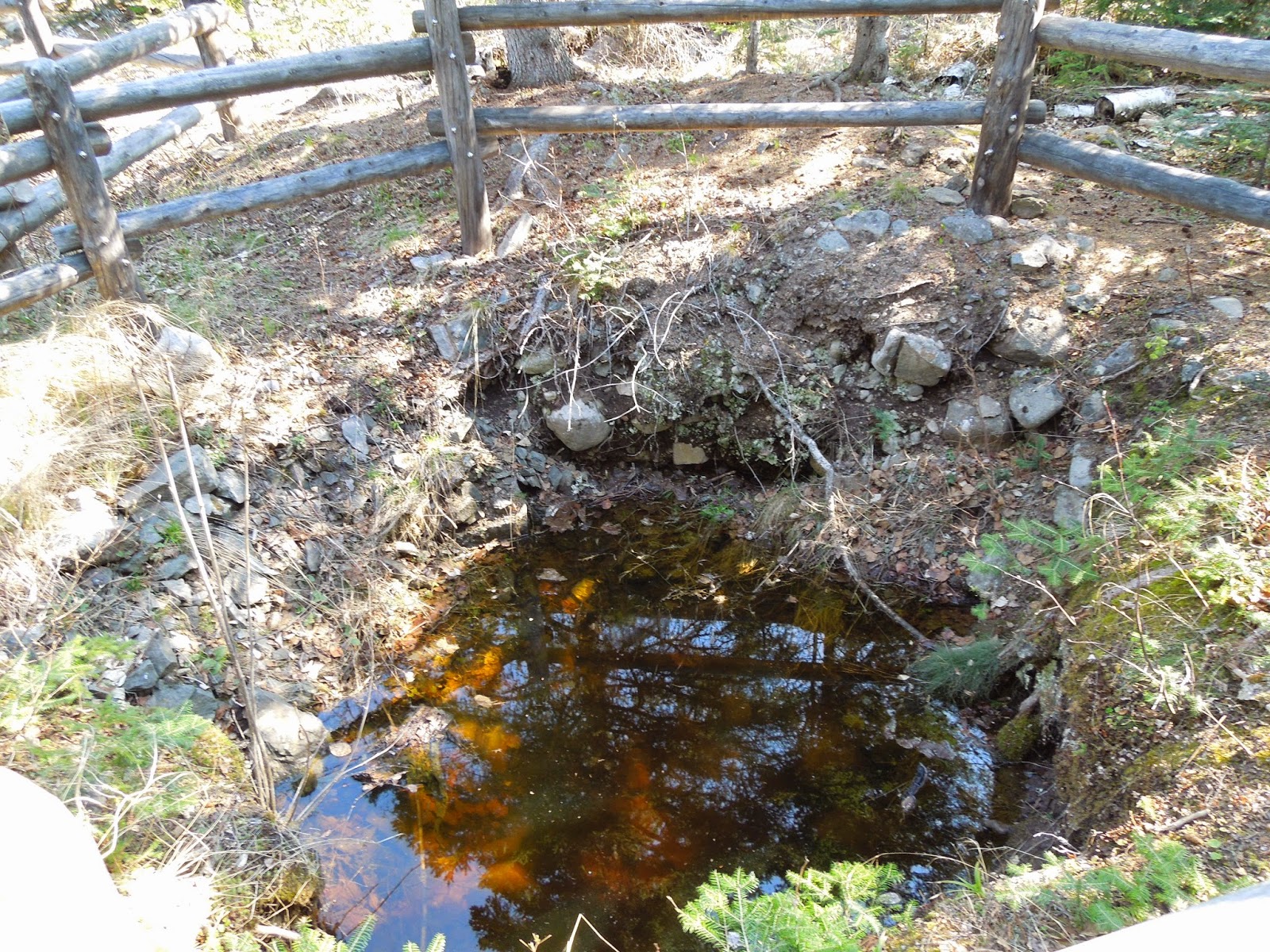 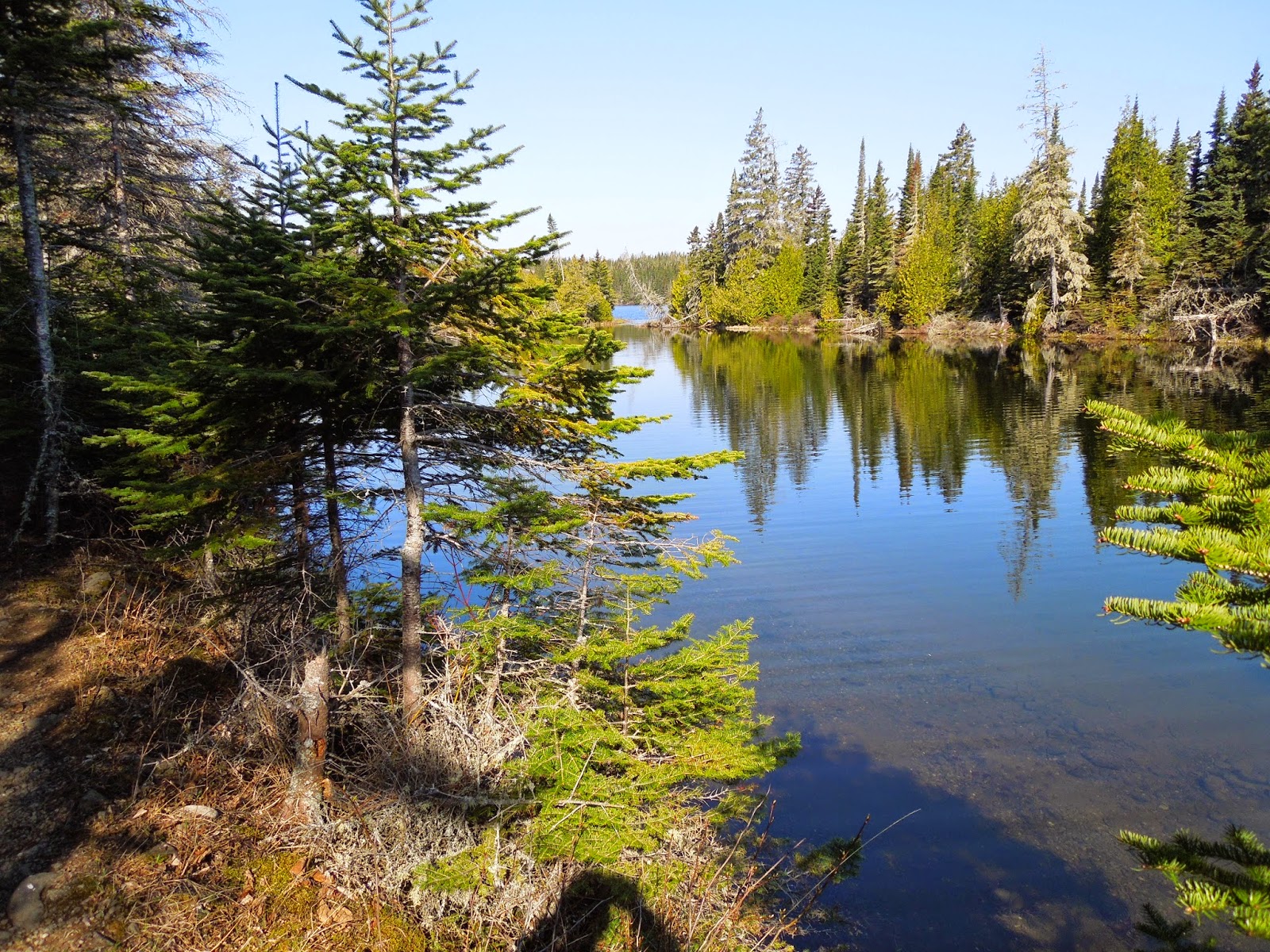 When I got back to Rock Harbor, I finished packing up for my trip back, but left the pack in the shelter.  Then I went down to the pier and waited around to try and get a shot of the Queen arriving.  I read for a while, bought a soda, and waited some more.  The Queen arrived about 1145, and I got the best shots I could considering the rangers made us leave the pier long before the boat arrived.  I was a bit surprised that many of the passengers were out on the bow waving to us as the boat came in; maybe they were crew? I then went back to the shelter to get my pack and make the shelter available for any new arrivals. 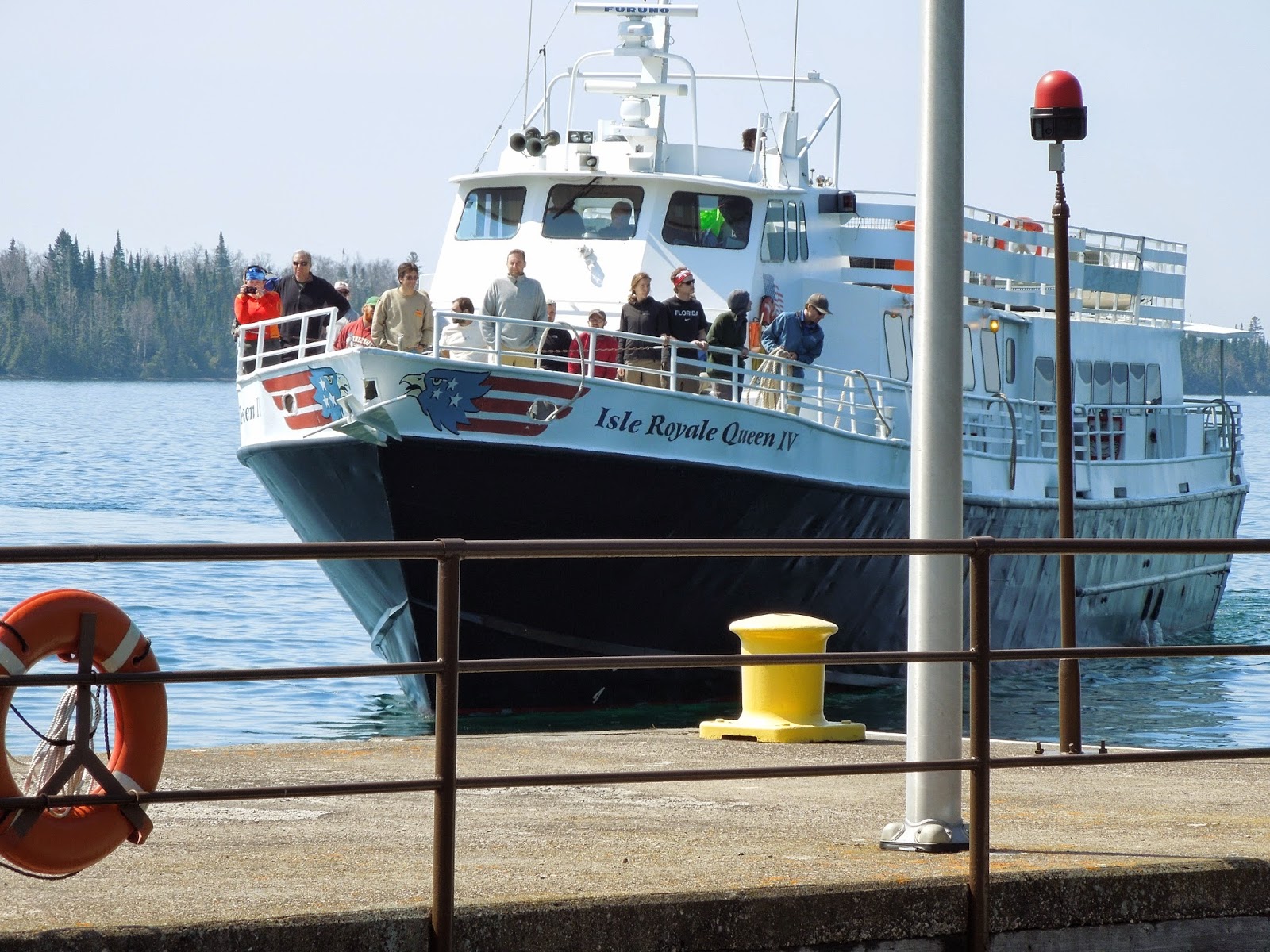 When I got back to the pier, the Queen was heading out towards Mott Island.  I had assumed the Queen normally stayed moored at Rock Harbor from its 1130 arrival till its 1445 departure for the trip back to Copper Harbor.  A crew member later told me they always stay at the dock, but this time they took the Rolph Peterson team (they've studied the wolves on Isle Royale for years) out to Mott and had only dropped off a few regular passengers.

There were an awful lot of people waiting for the Queen that day (Memorial Day).  I was surprised since I had seen so few people (except for the full shelters at McCargoe and Rock Harbor).  The waiting folks included a large group of high-schoolers with identical green packs.  One of them later told me they had arrived Friday.  Maybe that’s what most of them had done; paid the $120 ferry fee for just two nights on the island over the Memorial Day weekend.  So I had another soda and ate some snacks, and observed the people till we boarded.

The crowd made the 3 ½ hour trip back to Copper Harbor a bit miserable—mostly from lack of leg room.  Almost every bench/seat on the boat was filled.  The ride was a bit rougher on the way back, but still pretty smooth.  Felt more like an amusement park ride.

Back at Copper Harbor, my pack was one of the last off the boat.  But I still think I was about the first person out of the parking lot.  Maybe the others were driving home directly; while I was only going a couple of blocks to the Mariner North for the night.

I must admit, the shower at the Mariner, the whitefish sandwich dinner, the beer, and the nice bed were fantastic!  I got up early the next morning and drove for about 14 hours to Lexington to pick up my wife.  The next day we went on to Texarkana, and made it back home the day after.
Posted by CipherGB at 12:19 PM