I headed out this morning as early as I could, about 0730.  It was getting warmer, and I put away the rain jacket.  I left the rain pants on only to protect my pants from the mud.  The walk today started through the low-lands around the lake.  Some of the trail had almost disappeared in the fallen leaves.  As usual, there was the occasional blow-down and swampy/muddy areas.  I didn’t come to the Minong trail as quickly as I expected, so I pulled out my compass for the first (and only) time.  I used my shadow after that to give me a rough heading until I got on the Minong trail. 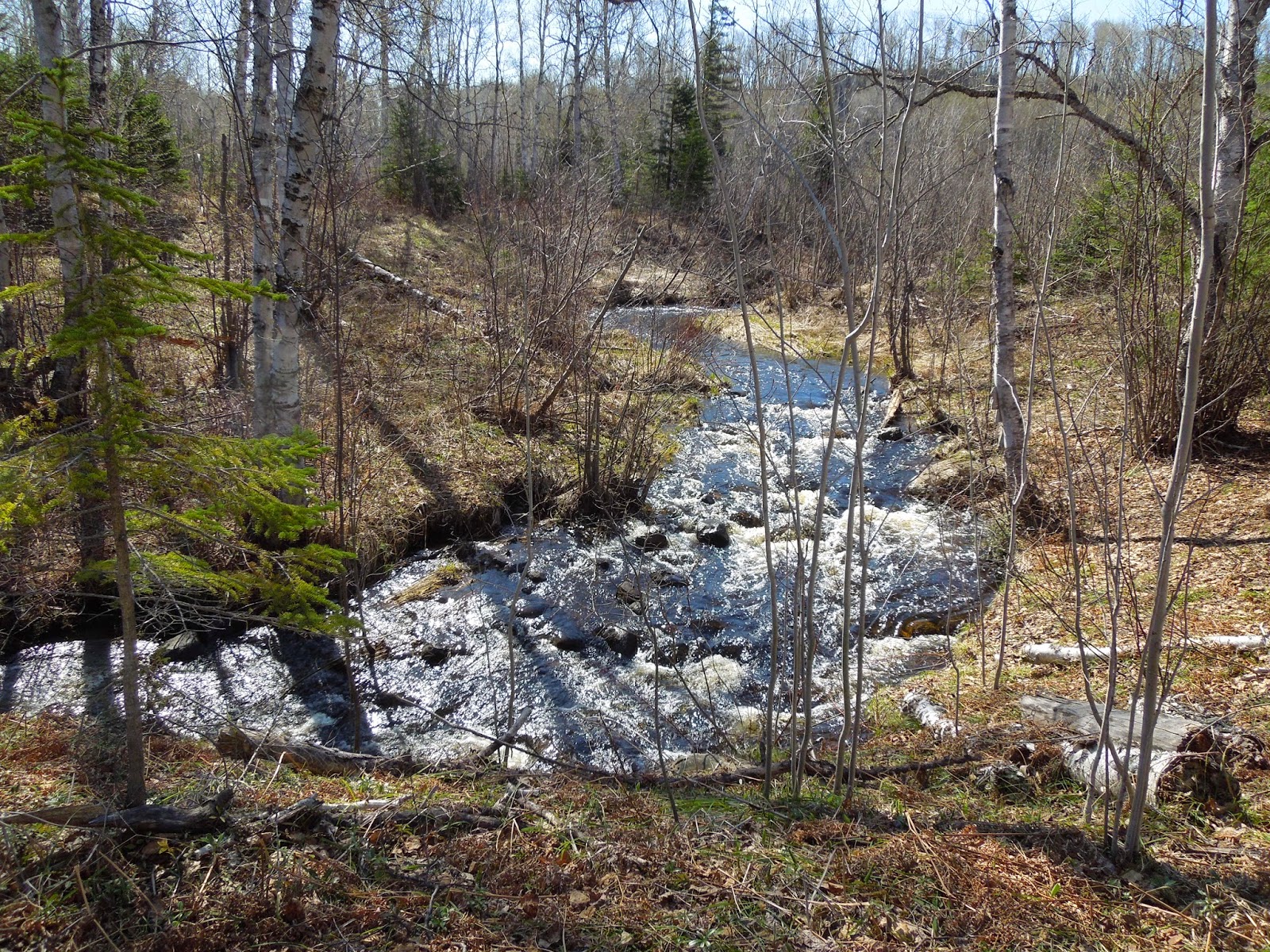 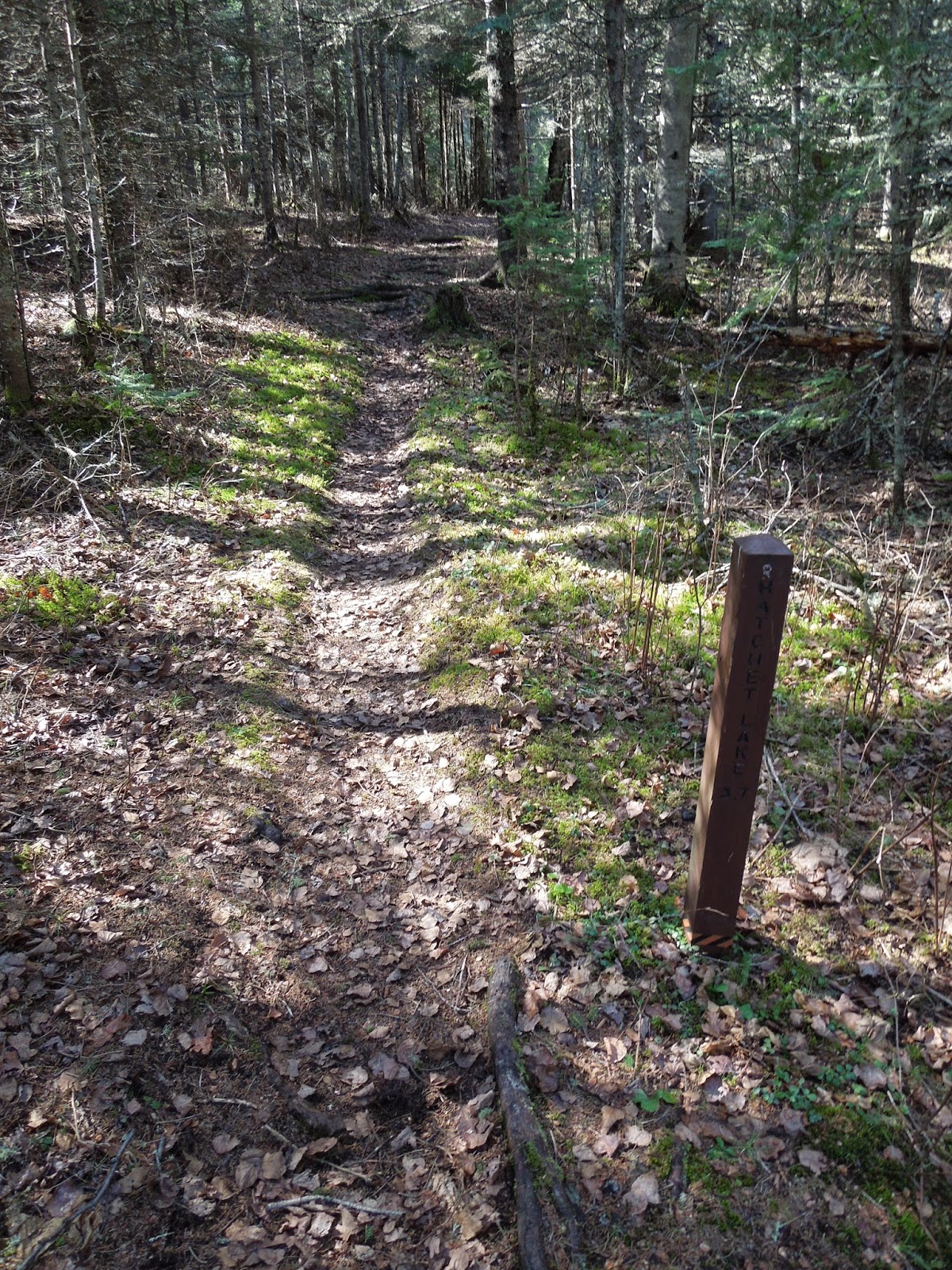 When I did finally reach the Minong, and headed toward Todd Harbor, I was pretty surprised.  The trail here was probably even nicer than the Tobin Harbor trail.  Other hikers had mentioned this was the easiest part of the Minong, but I still didn’t expect it to be easy.

The Todd Harbor campground area had some really nice views; the trail ran right through the campground.  Plus the sites were impressive.  They had pine needles lining the tent pad areas, and picnic tables at the tent sites.  I kind of regretted camping at Hatchet Lake instead. 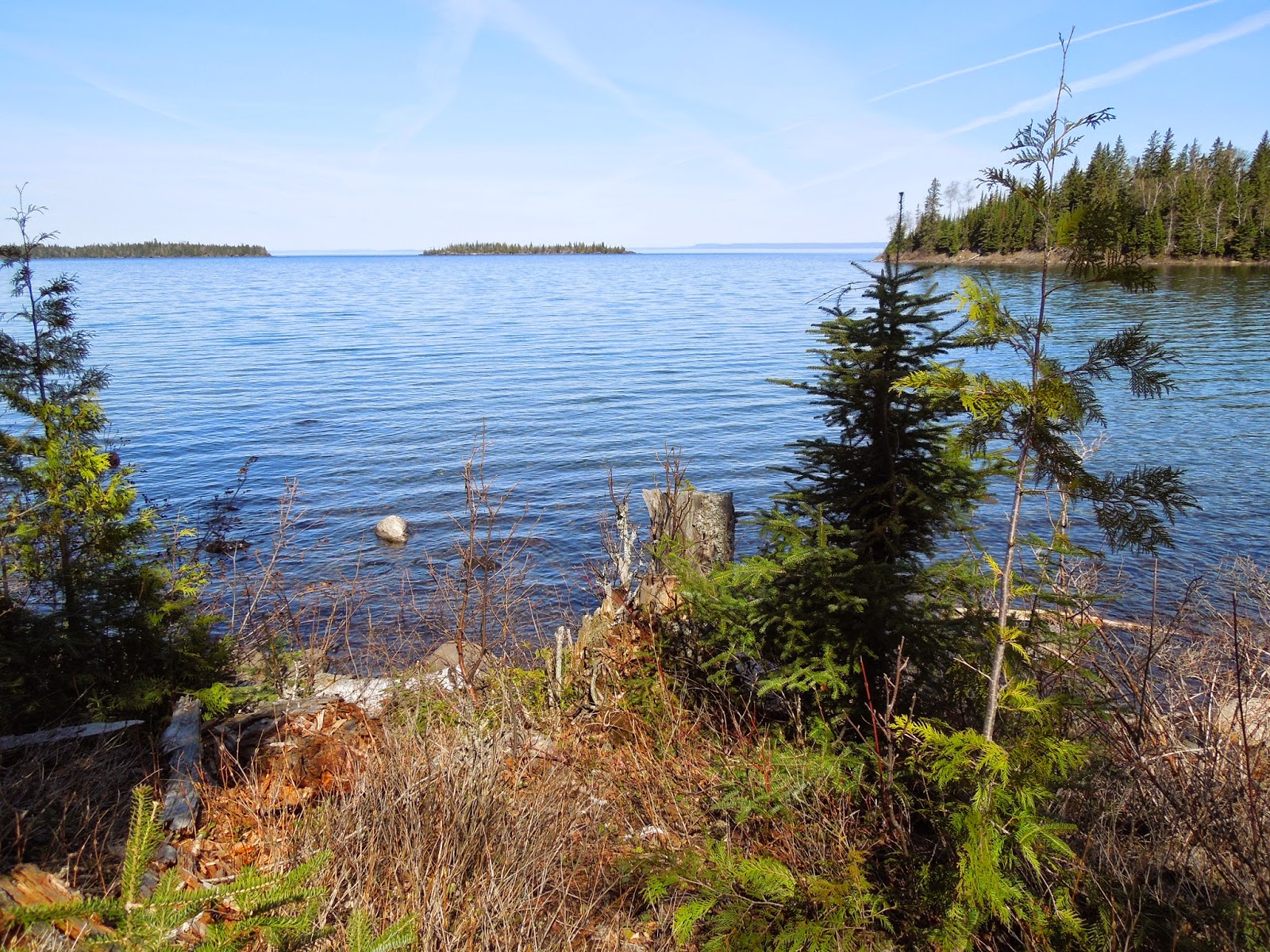 Right after the campground, the trail crossed a roaring creek.  It looked like the trail crossing was the narrowest area, but the crossing stones were deeply submerged.  This was the first crossing where I really felt uncomfortable with the pack and my hope to not get wet.  With my heavy boots, it would take forever for the boots to dry out.  I took off the pack and tossed it across.  Then my water bottles (separately so they wouldn’t fall out of the pack pockets) and poles.  I was a little surprised at how far I could throw the pack.  Some shallow wading, a nice jump, and I made it over.

The rest of the hike to McCargoe Cove was pretty uneventful, but lots of nice scenery. 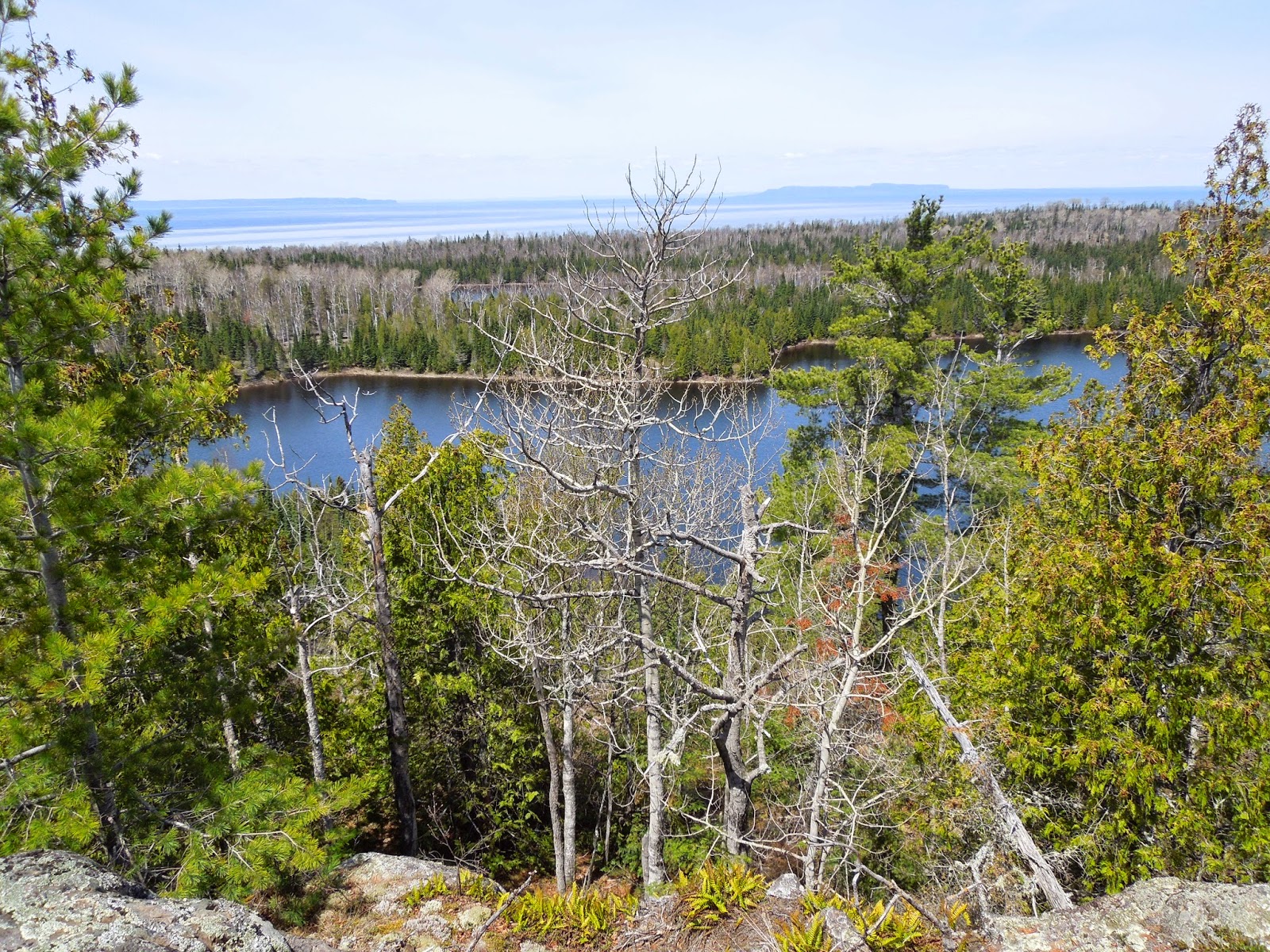 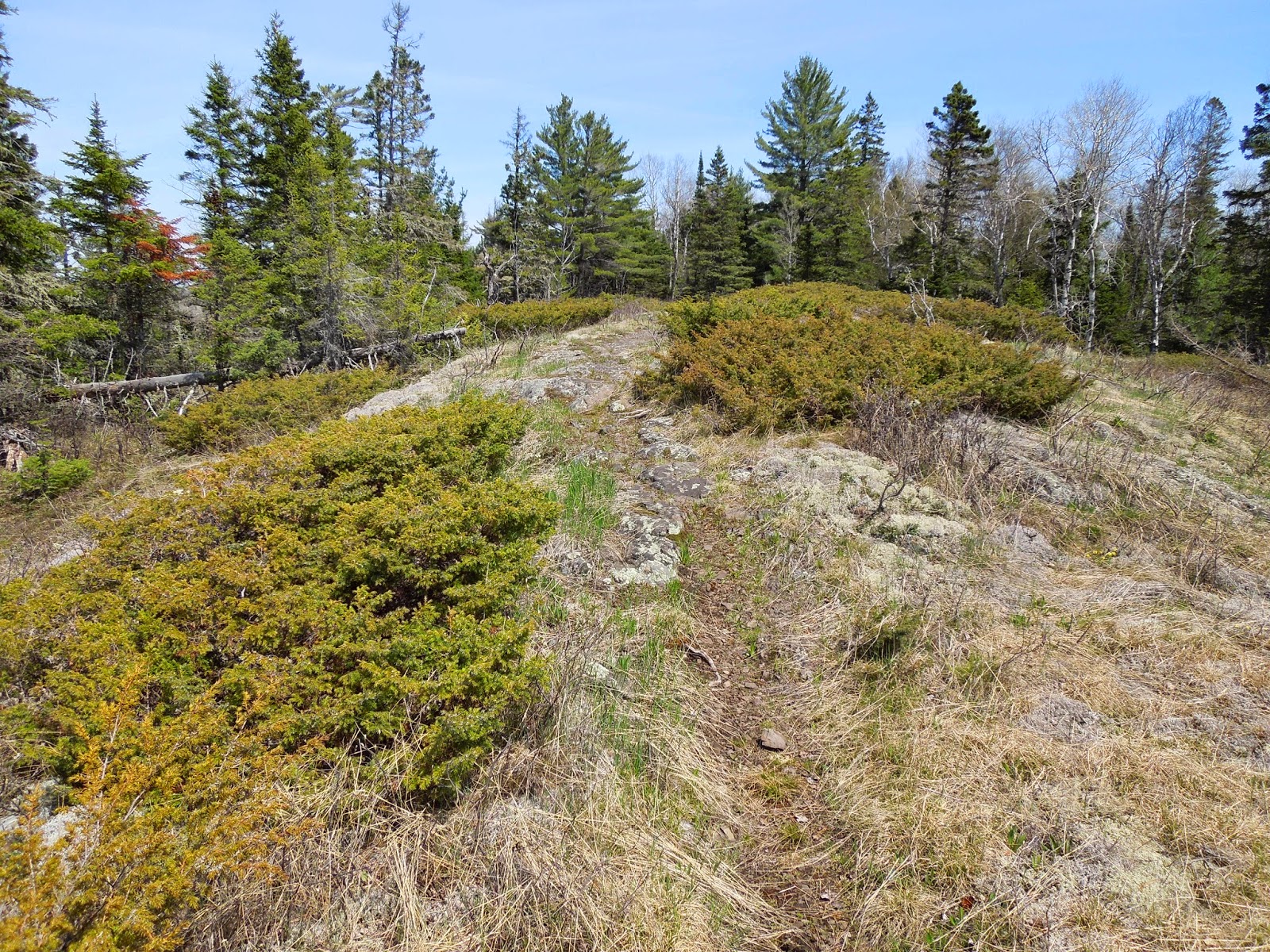 I got to McCargoe about 1430 (2:30 pm), without stopping at the Minong Mine.  The feet blister and hot spot were bothersome, and I wanted to get my boots off.  I was quite surprised when I got to McCargoe and found all but one of the shelters taken.  One shelter even had a lawn chair in front of it.  I hadn’t seen anybody on the trails since the hikers at Lane Cove and Daisy Farm.  And I only saw one actual person at McCargoe, a gentlemen fishing at the pier (dressed in what appeared to be street casual wear).  There weren’t any boats at the pier.  Maybe they were all out fishing or exploring the Mine.  But I was grumbling to myself about home-steaders until I got unpacked and had something to eat. 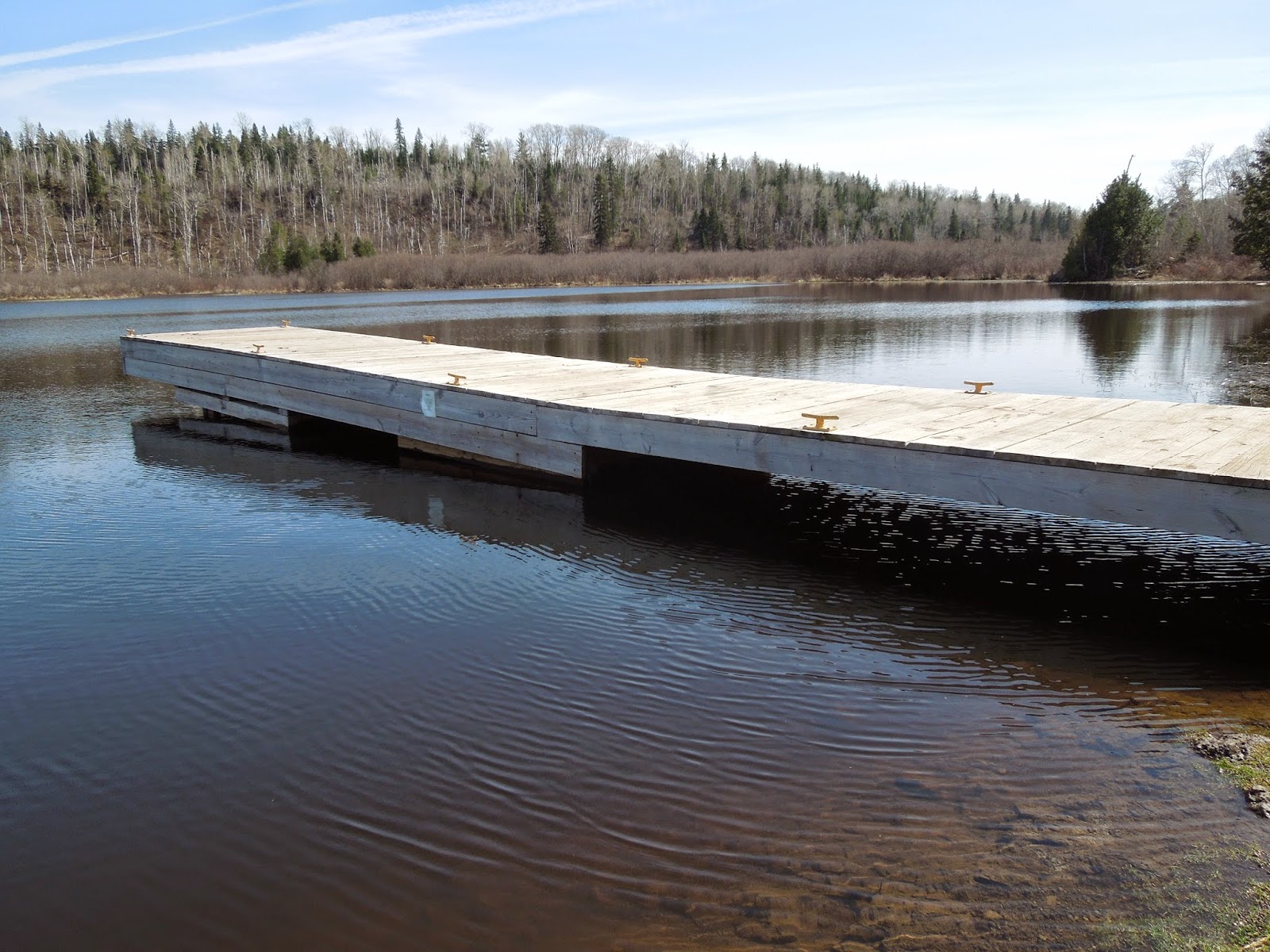 With an uphill shelter with no view, I was a little under-impressed with the campground that everybody raves about.  And the shelter looked like it received less maintenance than those at Daisy Farm.  The broom had only about 1/3 of its bristles left.  Still, it was a nice place to stop.  Somewhat peculiarly, the privy only had one spare roll of paper in it.  I don’t know if it was stocked with less, if it had gotten heavy usage, or if the rolls had been purloined.
Posted by CipherGB at 11:18 AM