This morning, I woke with no condensation in my quilt or tarp.  The prior condensation was from my breath!  I packed up quickly, but as usual was last to the eating area.  For some reason, my granola this morning turned out to be muesli.  I didn’t even notice till I was eating it.  Cold muesli is pretty chewy and not that appetizing!

The bushwhack descent from the plateau was supposed to be difficult.  I had hoped it was wooded areas that would just be difficult to get down.  Turned out the few wooded areas were mostly impenetrable.  When we got near the stream going down, the blowdown was tremendous.  When we were further away, it was almost continuous boulder and talus fields.

This was the closest I’ve ever had to a nightmare during hiking.  Most of the boulder fields had gigantic deep gaps between the boulders, sometimes over water, that made it dangerous to cross.  Seldom were there any flat rocks, at least within stepping distance of each other.  In some cases, the boulders were small and nearly all were unsteady because of the steepness of the descent.  In one case, it was so steep I watched N3 stand a hundred yards below me and it looked like he was standing at the top of a cliff.  R1 told me it wasn’t that steep, but I think he was trying to make me feel better.

While R1, M2, and N3 were able to walk across most of the boulder fields, I had to frequently get down on all fours and scoot across the fields.  This slowed the team down, and the others got some good rest waiting on me.  What surprised me was that my hybrid cuben backpack survived the contact with the rocks.  I cannot say the same for the skin on my fingers that peeled off over the next couple of weeks.

Unfortunately, I was not willing to pull my camera out during the boulder fields and risk losing it.  I was trying to think of a description of the fields that would do them justice.  Maybe they were a display of chaotic majesty and mindless menace.  On the other hand, I think the other guys saw them as an outdoor amusement park!  Maybe with some balance training, I can come back and handle them more confidently. 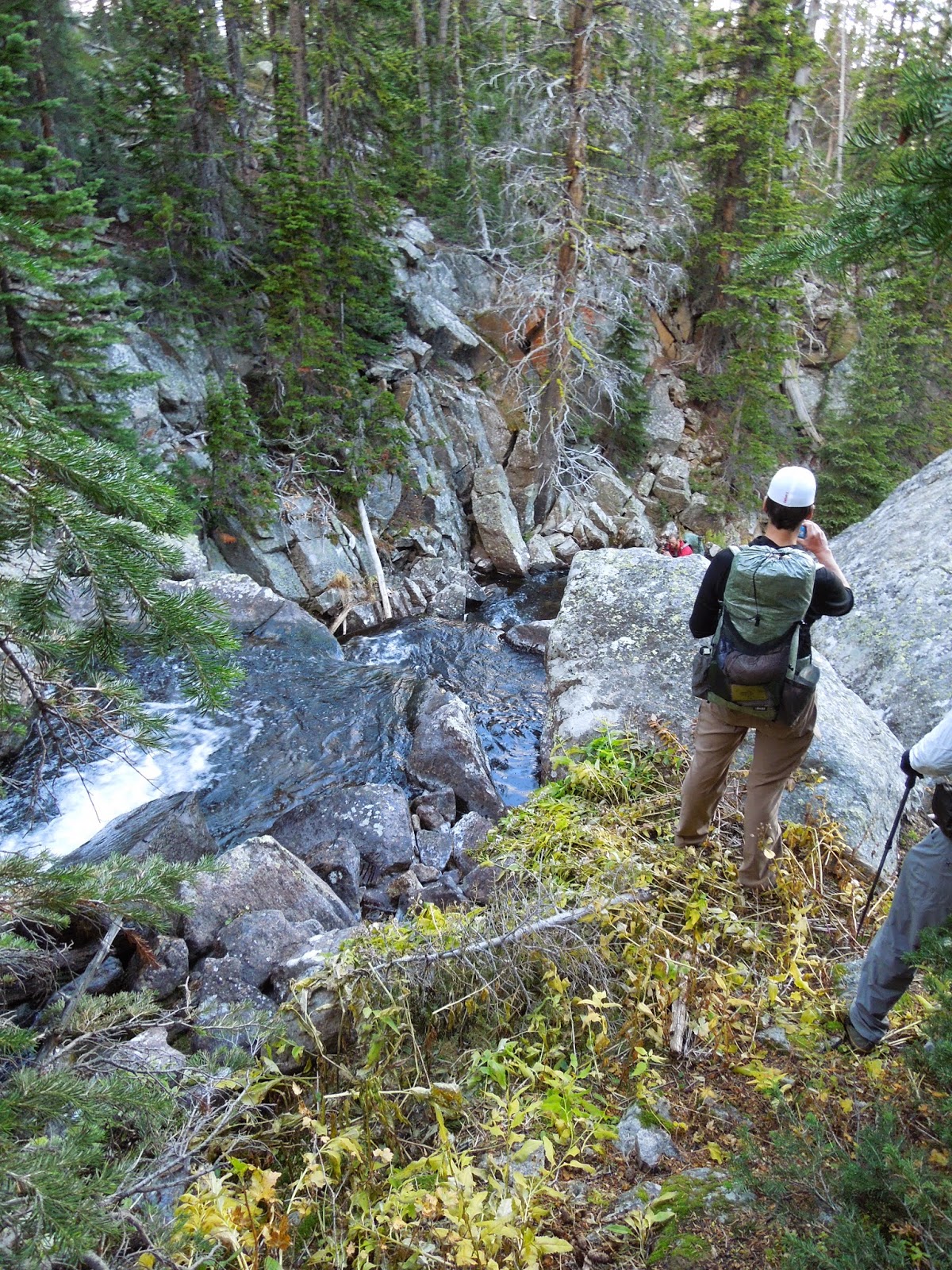 Once we got through the boulder fields and back near the small river, we ended up bushwhacking through some really difficult wooded areas.  At the start of that area, we encountered a waterfall that was maybe 10 meters high.  R1 went to the bottom and asked M2 to pose for a picture at the top.  M2 got a little enthusiastic and got too close to the pool right at the top.  He slipped on the rock he was standing on and went in face first.  The pool was only a couple of feet deep, but he completely submerged.  N3 was afraid he would slide over the drop and immediately used his trekking poles to get M2 out.  Unfortunately, M2 broke one of his own trekking poles, and he lost his bear spray canister!  Luckily, he was just wet and not hurt.

When we got down to the bottom of the waterfall, N3 saw a glint in the water, and we were able to recover the bear spray.

As we crossed the wooded area, we were trying to get to the small river and across to the original trail which would be about four miles short of the trail head.  As we bushwhacked, R1 kept checking his GPS and indicating we were only 500’ from the trail.  Funny how it went from 500’ to a few thousand.  An hour and a half later, we actually got back to the trail we were looking for.  I ended up with scratches all over my arms and legs from that bushwhack. 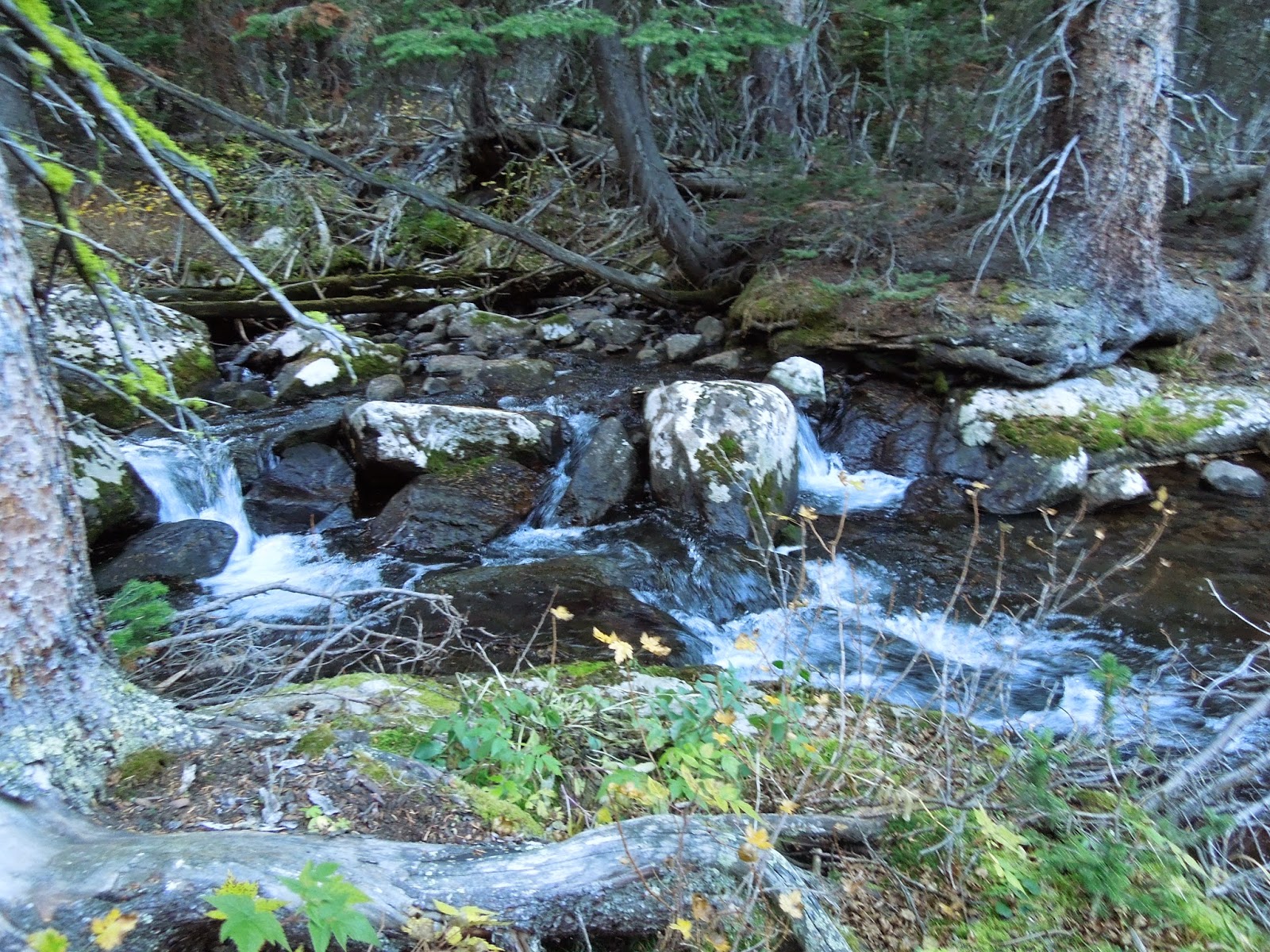 The trail back to the trail head was only about three miles long where we found it.  The walk back was brisk and relaxing.

We got back on the road, and stopped at a small tavern/restaurant for a great burger dinner.  We stopped at the lodge to pick up our extra bags and drop off the bear spray canisters, and made it to the hotel by about 9:00 pm.
Posted by CipherGB at 1:28 PM