When I got up this morning, I had serious condensation on the underside of the tarp, on my quilt, and on my bivy.  The others had gotten up early, and were at the fire ring when I got out of my tent; so I didn’t pack up yet.  I mentioned the condensation to the others at breakfast, and they said they didn’t have any.  They all volunteered to take a look and give me their advice.

At my tent, they pointed out the lack of tree cover and that I was in a small bowl, both conditions which would increase condensation.  N3 also pointed out that my pitch wasn’t as tight as it should be, and suggested that could be causing some dripping under the tarp.  R1 gave me a pointer on how to add knots to the guylines attached to my trekking pole supports that would tighten the pitch.

R1 did a little fishing while we packed up.  Then we started our day trying to decide which way to go around the lake so we could bushwack along the string of lakes.  The path was going to be gently downhill.  And R1 was going to fish as we went around some of the lakes.  We would hike, while he waded around the lake banks. :) 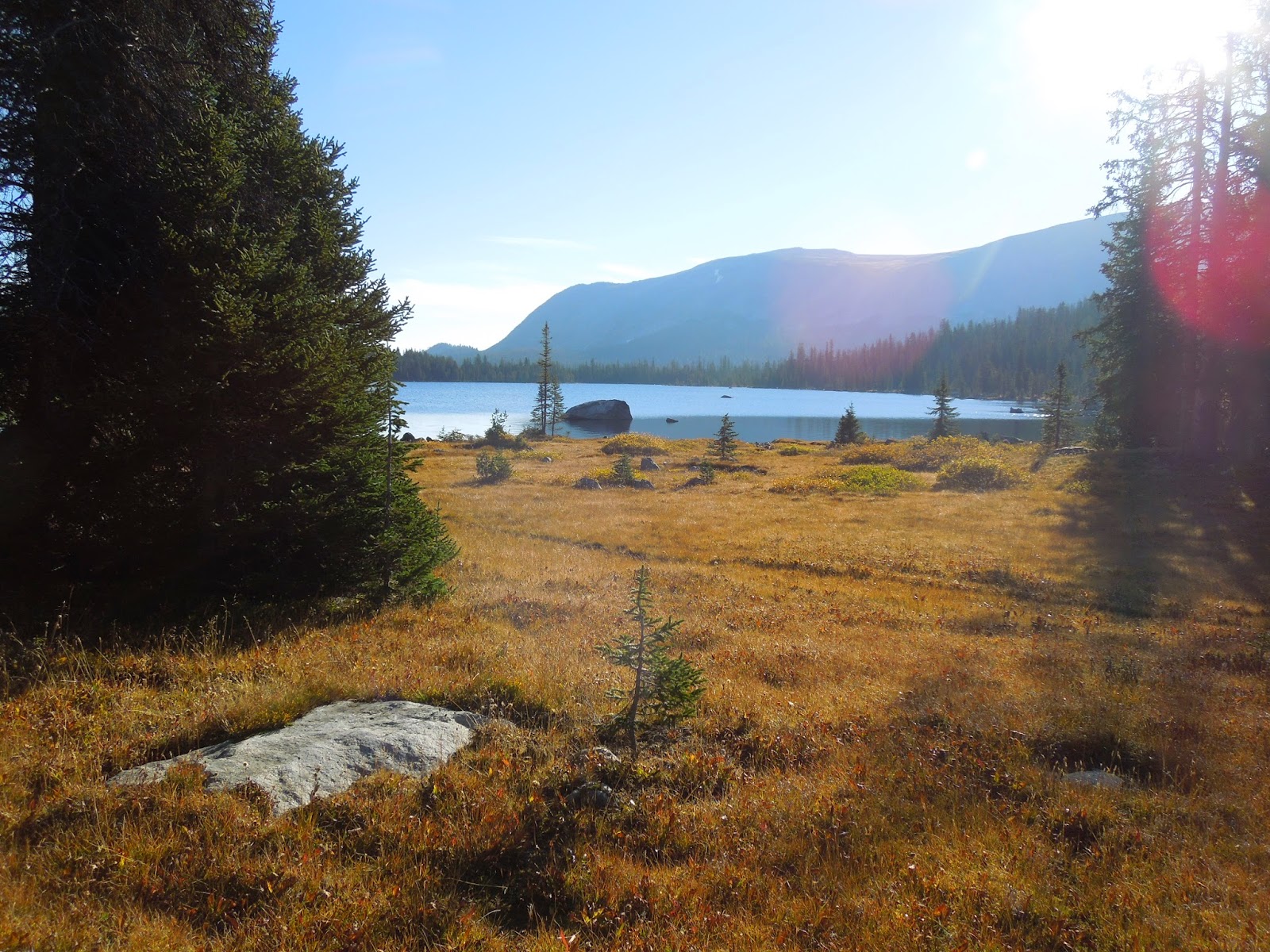 So the path today down the lakes was pretty wooded and marshy.  We did find light trails that were probably created by hunters and sometimes animals.  We found some impressive potential camp sites under trees with pine beds. 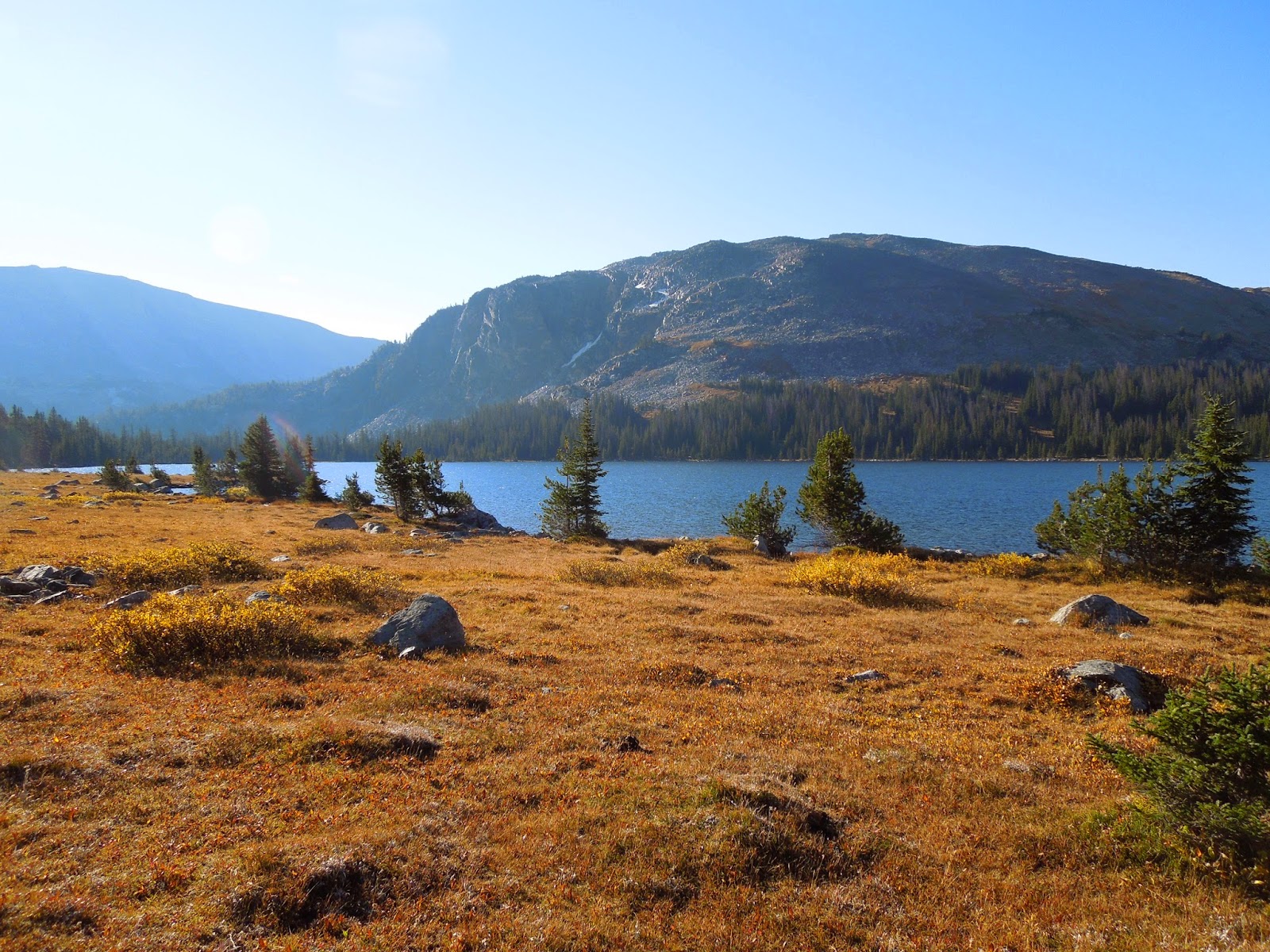 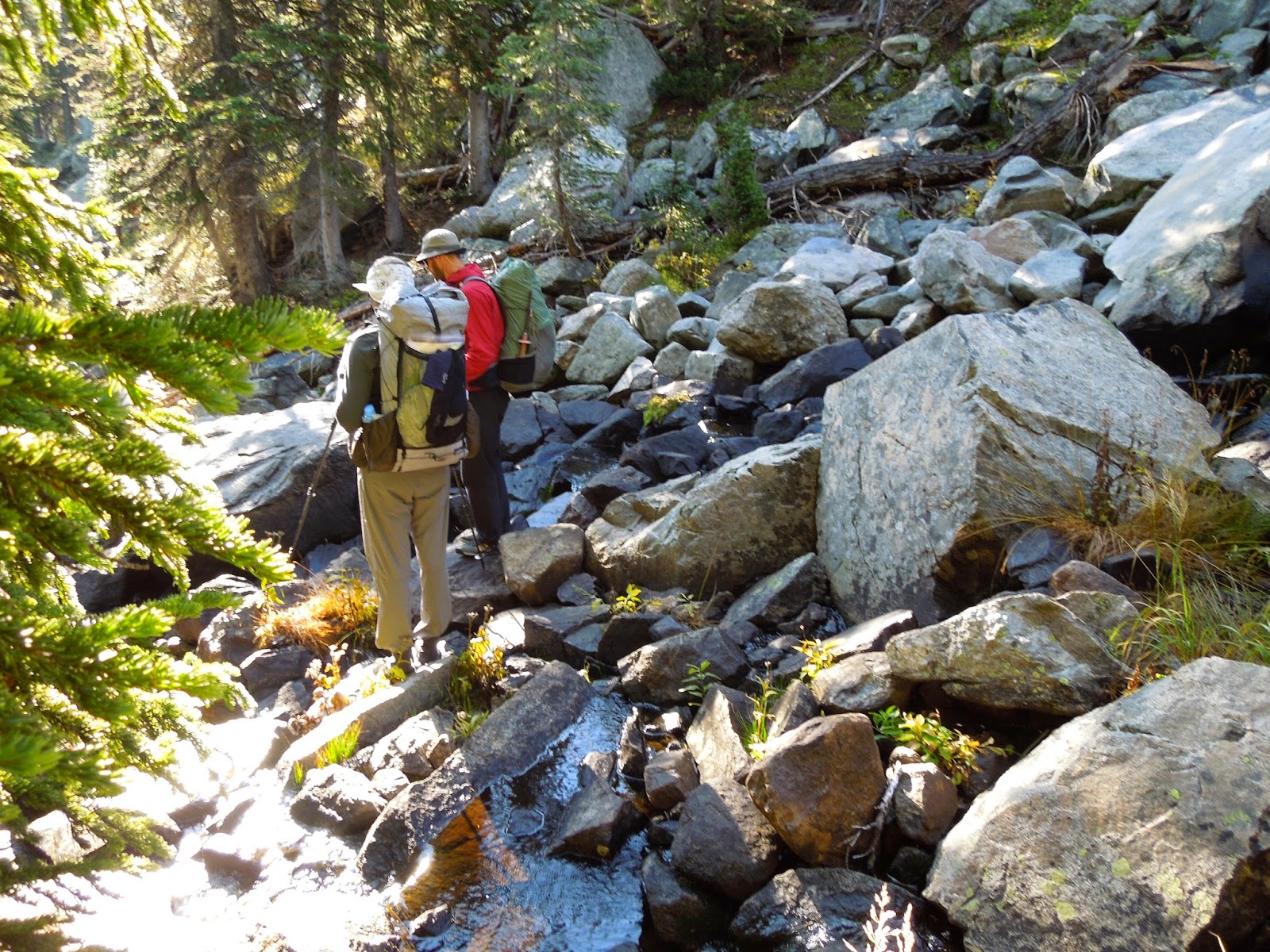 For a lunch stop, R1 went fishing while M2, N3 and I relaxed at the edge of a lake.  R1 went on around the lake in the direction we were going.  He said he would meet us when we got back to hiking.  For our path around the lake, we had to head up an incline away from the lake.  M2 and N3 thought R1 would be on the path ahead of us, and went further than I was comfortable without meeting him.  We finally decide to give a few loud yells and heard him in the distance back towards the lake.  We headed cross country that way, and finally found him at the lake outlet fishing a very scenic pool where he was getting hits and catching some small trout. 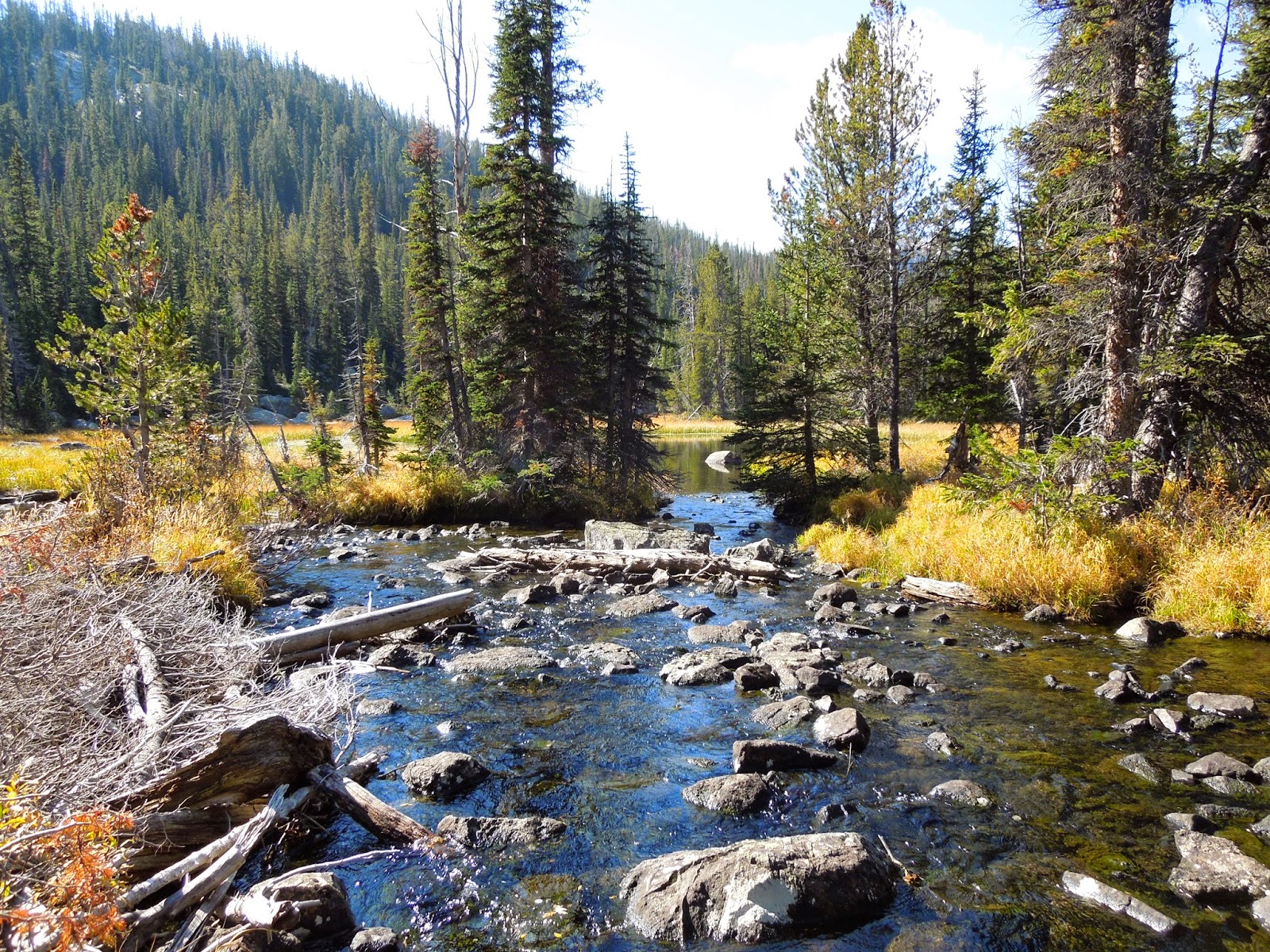 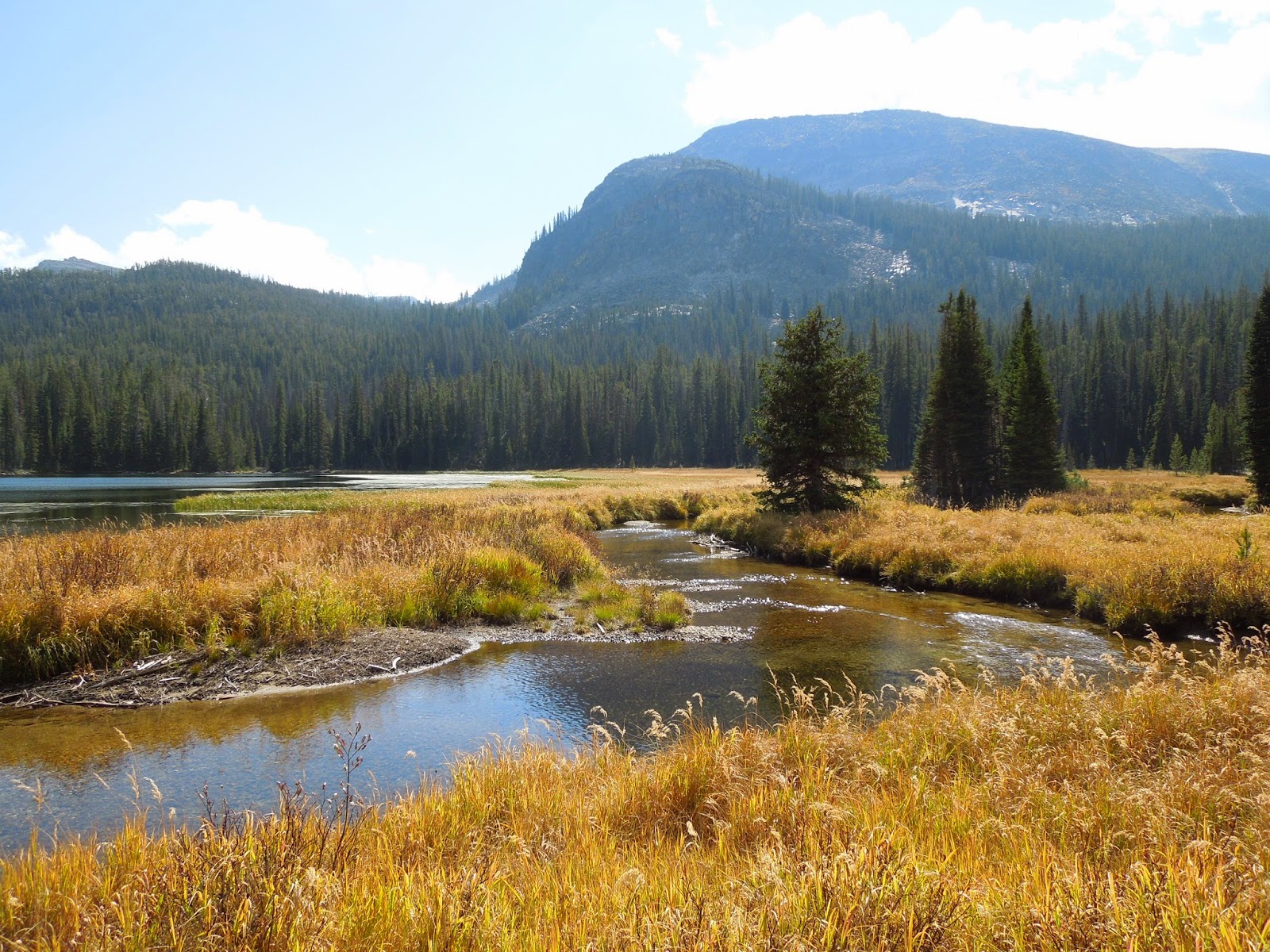 When we stopped at a later lake, R1 did some casts and M2 went down to the water’s edge to take a look.  Suddenly he gave a start and jumped a few feet back.  He had looked down and noticed he was a few inches away from a porcupine.  R1 tried to get the porcupine to give him a good photo, but the animal seemed to want to hide its head and only moved a couple of feet to a spot between two trees and hunkered down there. 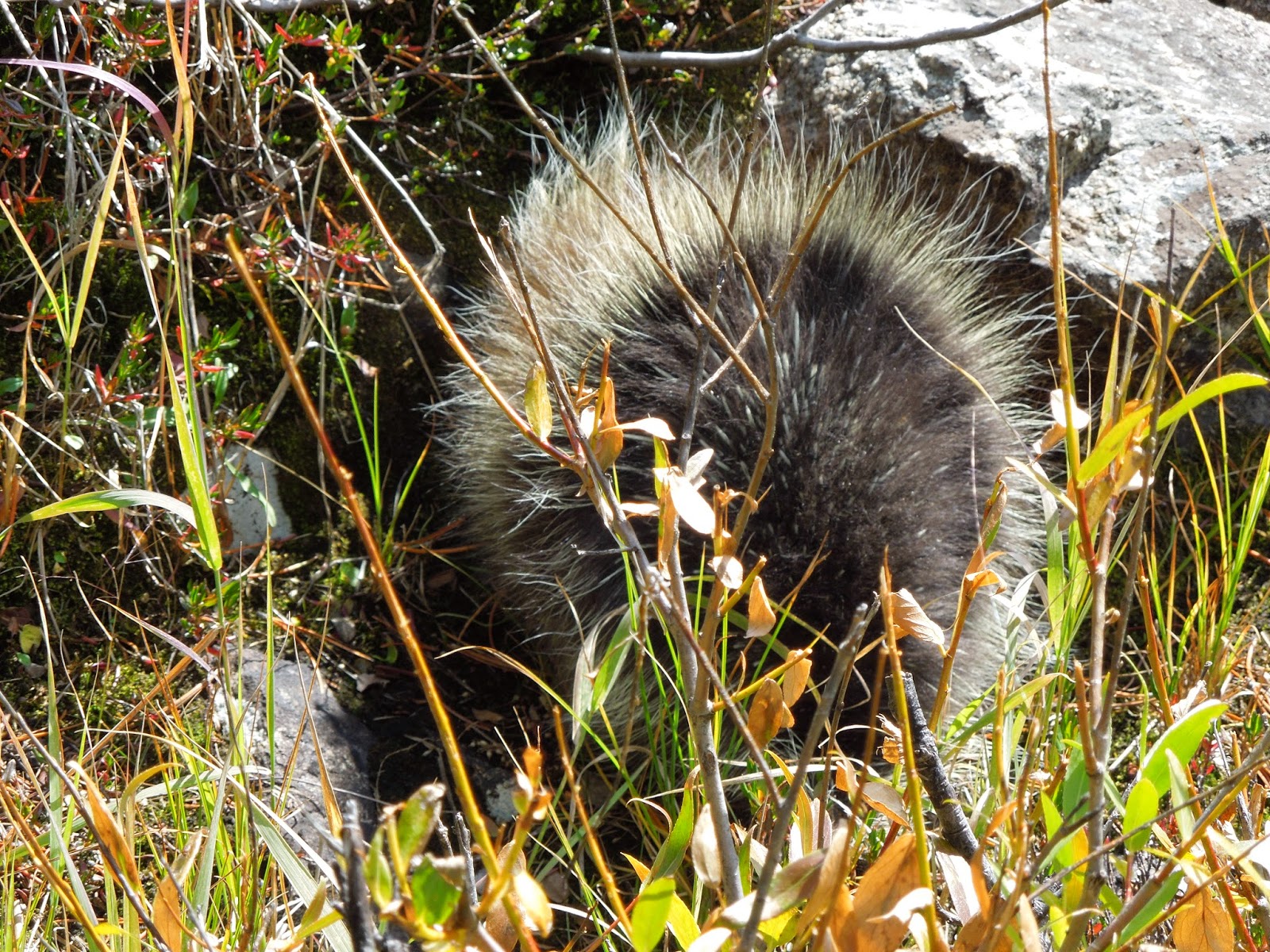 We went a ways further and decided we weren’t going to make it to the end of the string of lakes.  M2 and N3 wanted to bushwack up a steep climb up to the ridge and make our way back to a lake a little past our previous night’s camp site. 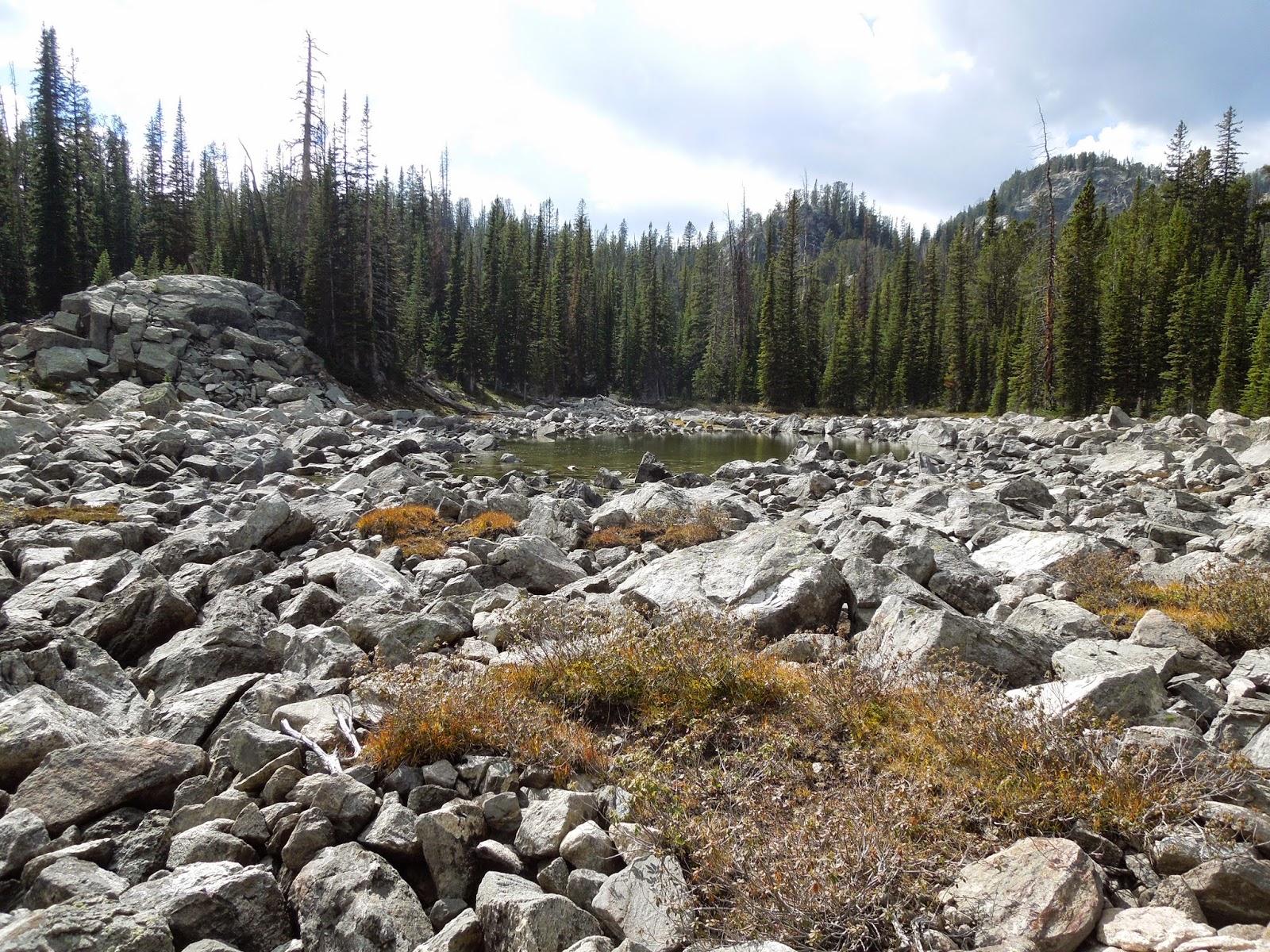 For me, the bushwhack up the ridge was pretty challenging.  Lots of blow-down and some steep hiking.  My breathing got a little fast, and I didn’t go as fast as the others.  They even climbed up a rocky hilltop at the top of the ridge, while I waited for them down on our path. 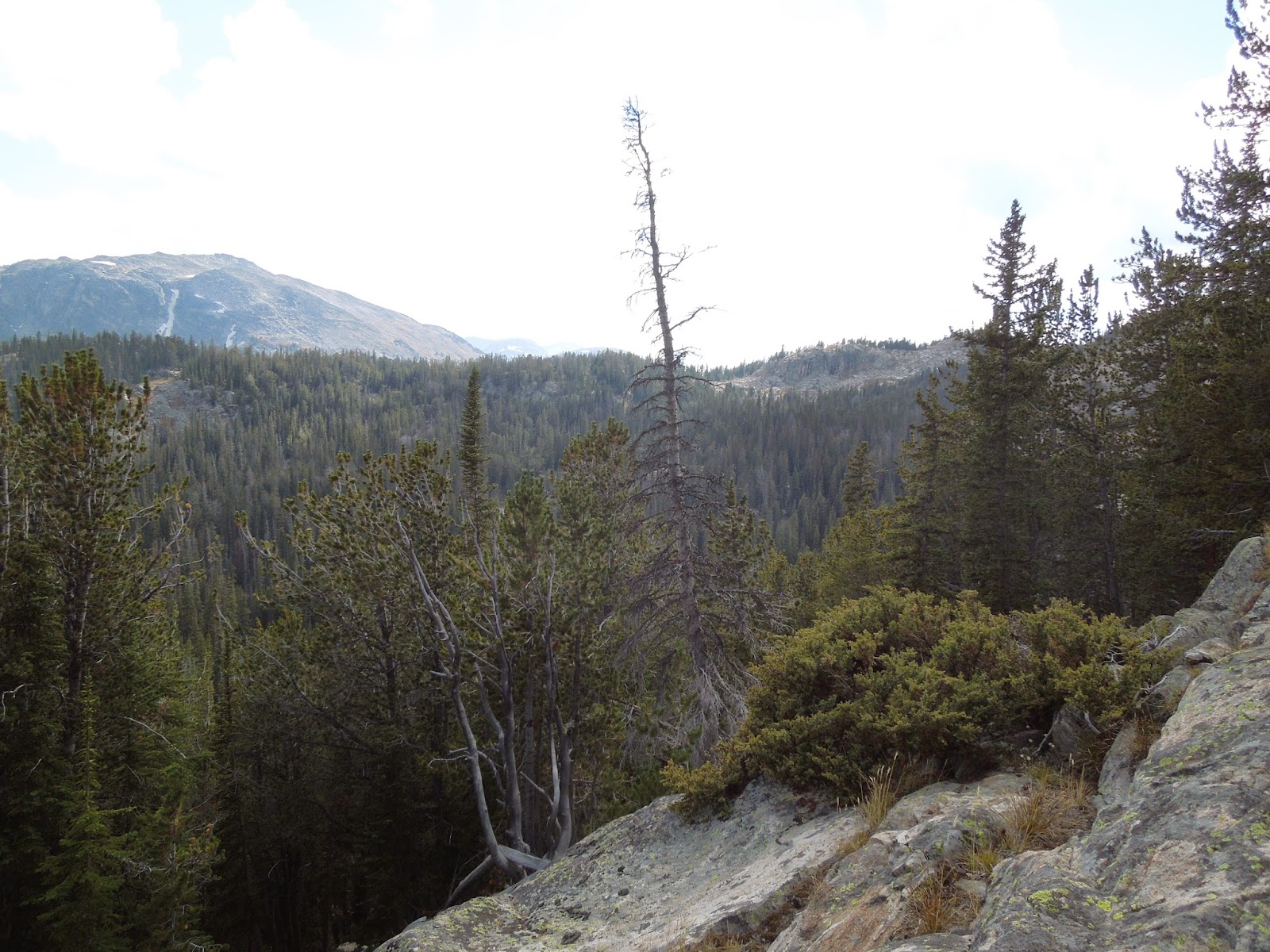 From there, we crossed a section of the plateau with a few large boulder/talus fields and some long, mild inclines.  Late in the day, we passed some white tailed deer near one small ‘peak’.  I wasn’t thrilled with the boulder fields, but I crossed them without too much difficulty.  They were medium in side and had a reasonable number of flattish rocks. 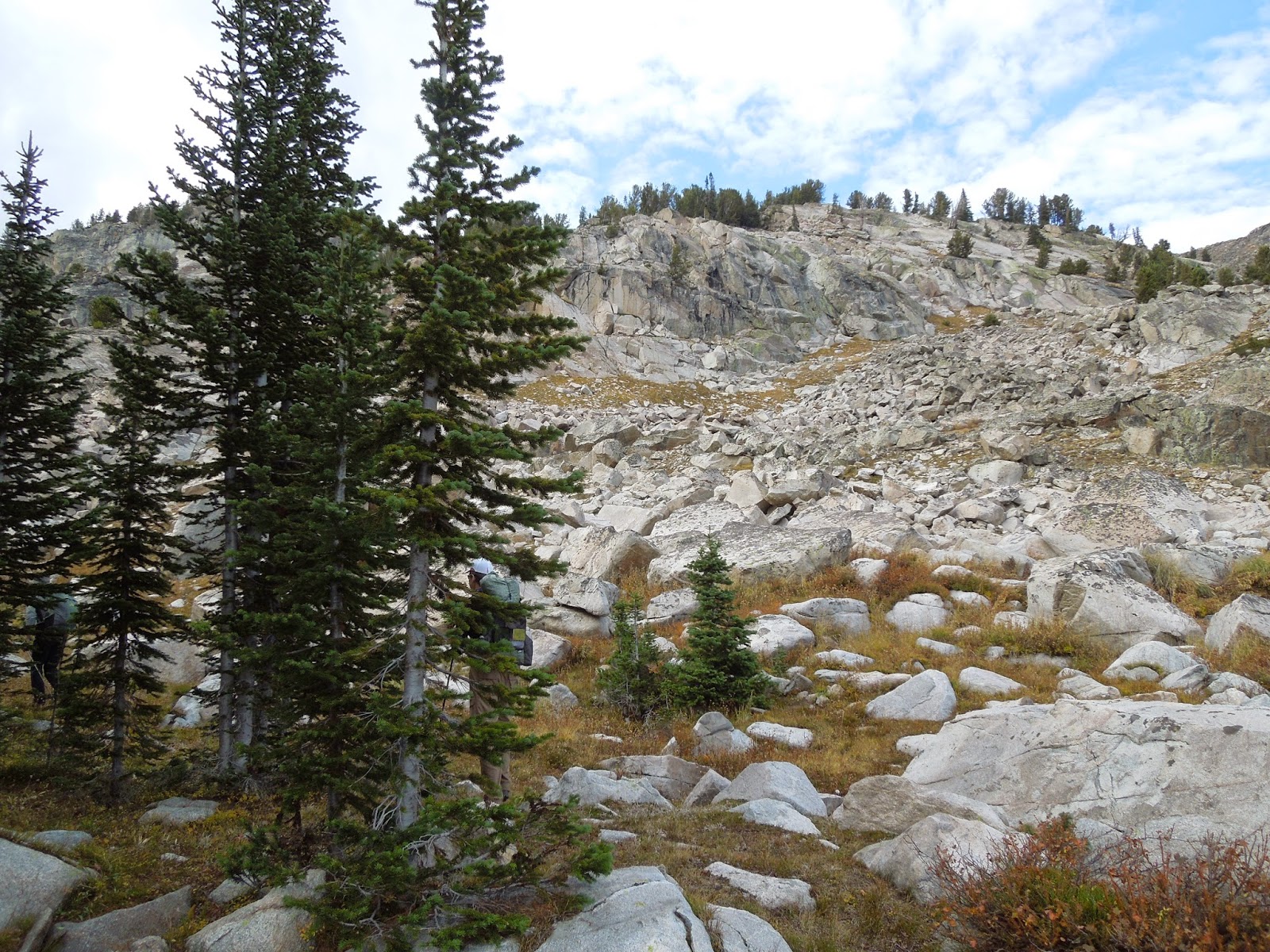 The camp near the lake was pretty uneventful, with a decent bear hang and an abundance of good camping sites.  I didn’t have tree cover, and it rained lightly for a short period during the night.  I had mild condensation again, with it being worse around the shoulders on my quilt and inside the bivy. I was beginning to strongly suspect it was due to my breathing.  The ZPacks bivy I was using has a zipper down the center top of the bag and a bit of netting (or opening after removal) about 2/3 of the way across the top of the bag where I think they expect the sleeper to exhale and get rid of the condensation in their breath.  My side sleeping means most of my breath stays in the bag, and because the opening is only 2/3 of the way across the bag, I cannot sleep with my shoulders and head outside the bag!

Other than that, it was a good night.  Temperatures had been rising each day, and I was using less clothes and quilt each night.