I switched up my morning routines a couple of times trying to speed up eating, packing and other necessities.  But found that about 1 hour and 15 minutes was the minimum I needed to get on the trail.  That was a little bit depressing.  I would spend a little bit of time putting hiking goo on my feet to prevent blisters.  I used two food liner bags (and stuff sacks), one for breakfast/snacks and one for dinners.  Getting everything out of the layered bags, and then putting trash back in seemed to take forever.

My food choices had been changed by my recent switch to a Paleo diet (high fat, moderate protein, low carbohydrate), so I had a mix of traditional and Paleo type meals.  The Paleo part made it harder to get enough calories per ounce.  So I had Mountain House bacon and eggs planned for breakfasts (two servings each morning) along with my chocolate/malt milk concoction and some dried bananas.  For lunch I had Mountain House granola with blueberries, dark chocolate, mixed nuts, trail mix, dried pineapple, and jerky.  For dinner I had planned one Paleo serving of beef stew or chicken and vegetables (from a small business startup) and one Mountain House entrée serving (lasagna, stroganoff, etc.) and a chocolate instant pudding made with Peak dried milk.

The bacon and eggs were edible; I couldn’t say anything more complimentary.  But the volume was too much.  Plus, it was the only reason to break out the stove in the mornings.  I’m not a big coffee drinker, and I don’t need caffeine to start my day.  After a few days, I shifted first to one serving of bacon and eggs plus granola and then shifted to just granola.  For lunch, I typically used most of what I brought except for the jerky.  I just didn’t enjoy the hassle of trying to chew the dried meat—it took too long on my stops.  The Paleo beef and chicken dinner entrees were a chore to eat.  The beef stew seemed 85% beef and 15% vegetables, and for 300 calories took as much volume as two Mountain House servings.  The chicken and vegetables was a bit too spicy, and had the same problem with too much volume.  The Mountain House single serving entrees were great!  So, like with the bacon and eggs, I first dropped to half the paleo serving size with a single Mountain House entrée serving.  Then I shifted to just two Mountain House servings and no Paleo entree.  The chocolate pudding was excellent, but it still became monotonous after seven nights.  From this summary, you can see that I took too much food.  And I carried it home.

Anyway, I got on the trail about 0715.  I wore my rain pants and jacket, but packed the down jacket.  The days got warmer from now on, with today getting up to 57.  There is a lot of underbrush, and a lot of it overgrows the trails.  So the rain pants and jacket were useful.  The muddy trails lasted throughout the whole trip; though the percentage of dry trail increased each day.  Typically, any approach to a board walk included a dozen yards of swamped trail.  But the post-rain swamped areas were not limited to the areas near board walks.  And the streams were all overflowing.  Often, you had to bushwhack to find a safe crossing.  Many times you could see the usual crossing stones way under water. 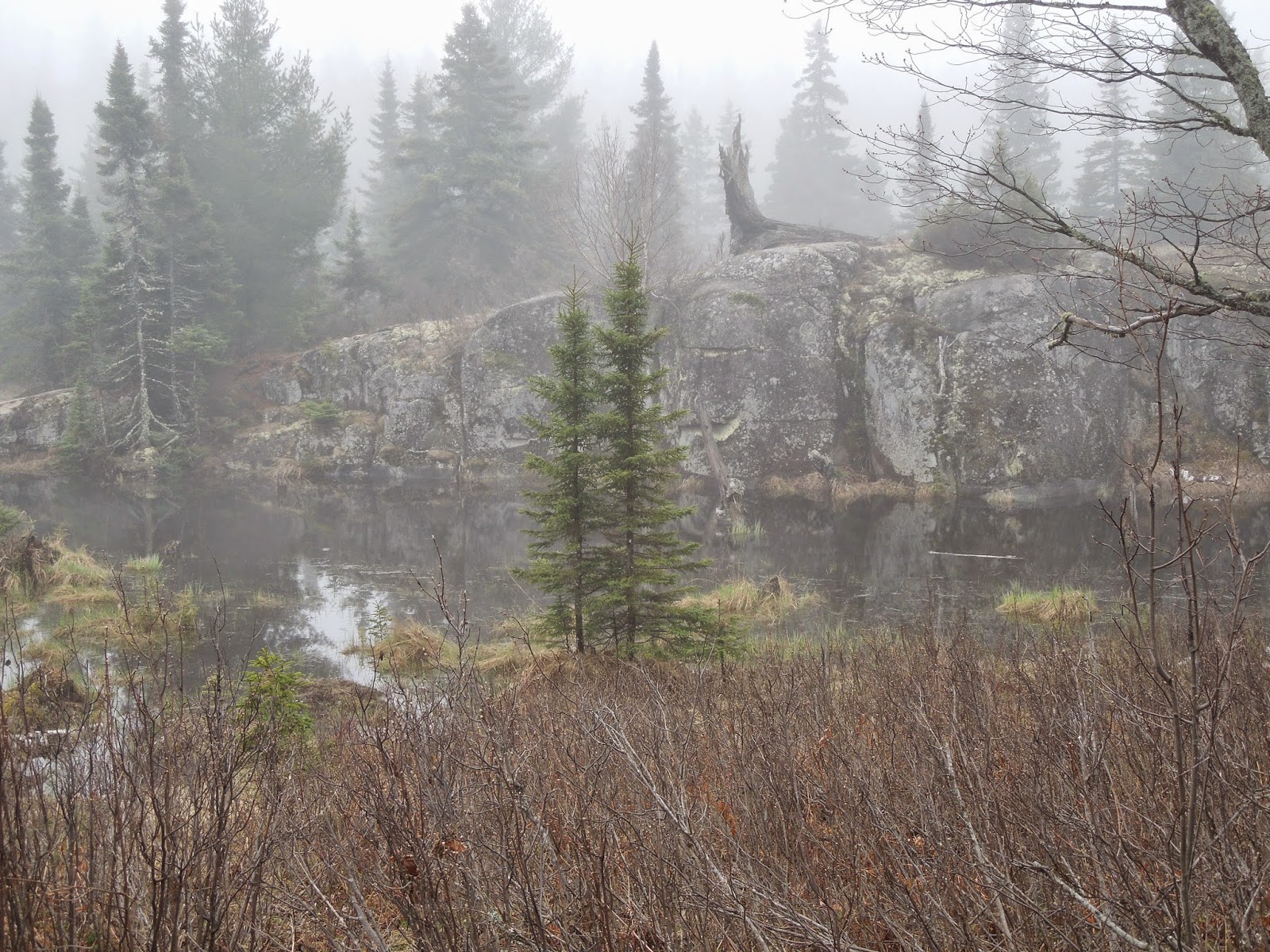 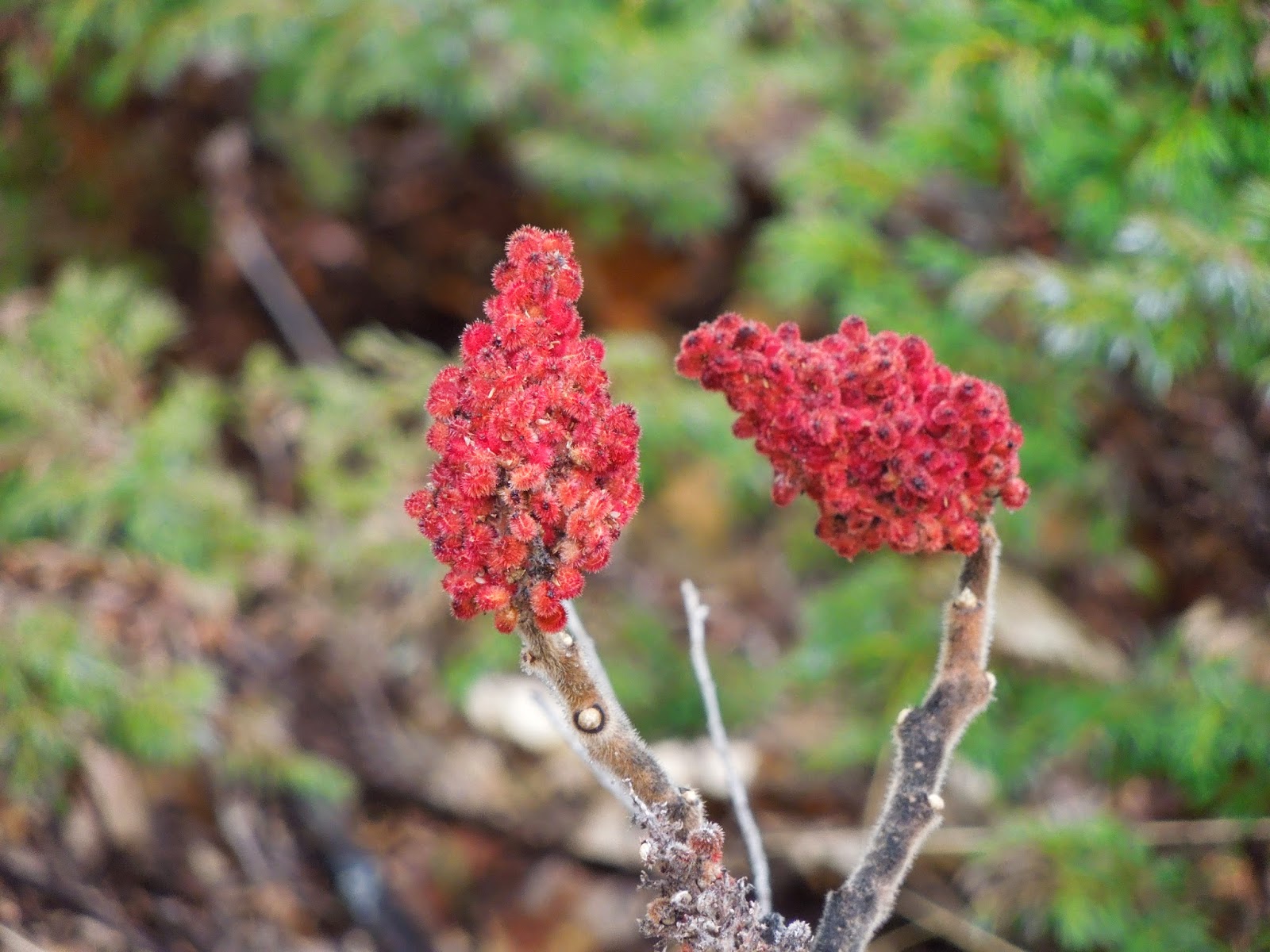 I worried about wind and cold up on the Greenstone.  But it turned out to be relatively warm with just a mild breeze.  It was not like the day before.  The blow-down continued to occur every once in a while.  Today was the first day I saw the numerous garter snakes.  All of them seemed angry that I was using their path, hissing at me and only departing slowly.  The variety of foliage and terrain on the trail was pretty amazing.  In Texas, and even in the Adirondacks, the foliage and terrain is usually pretty monotonous, even when it’s beautiful.  And while I disagreed with a lot of folks’ view of the difficulty of climbing up and down to the Greenstone, I do agree with their assessment of the difficult footing.  The rocks, roots, mud, and blow-down slowed me down quite a bit.  And the heavy boots required a lot more energy to move than they do on relatively easy trails. 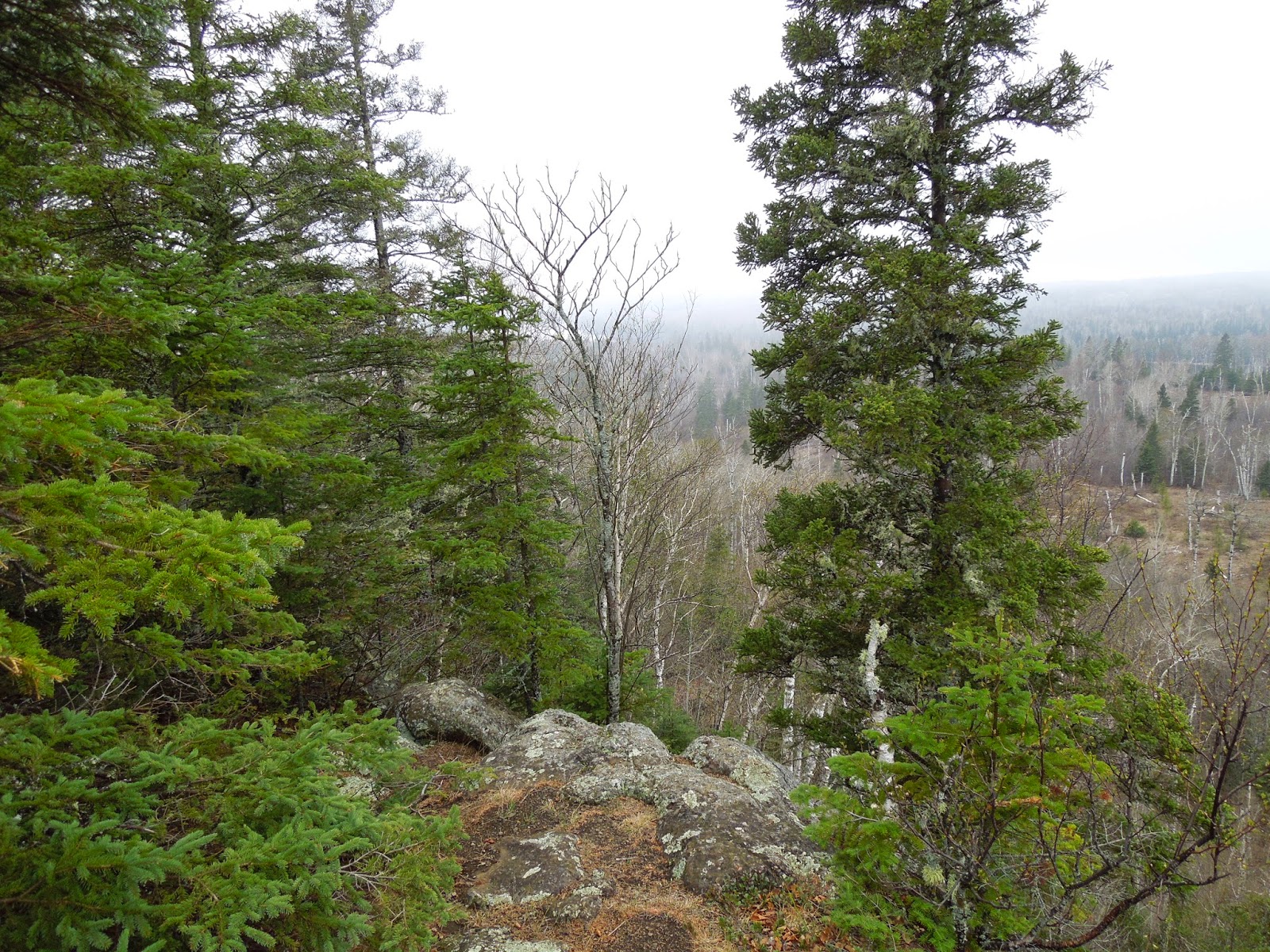 When I reached the turn-off to the East Chickenbone trail, I thought I had it made for the day.  I kept on towards West Chickenbone and finally came to a creek and trail crossing in a deep ravine.  One trail headed to the right, downhill toward Chickenbone lake and stayed on this side of the creek.  There were two paths down to the creek, and a log seemed to discourage hikers from going on the trail down to the lake.  Across the stream there were two trails heading up out of the ravine in directions not that far apart.  I pulled out my map (but not my reading glasses), but couldn’t decide on where I was.  I went down to the creek, and crossed over (this was one where the rocks were partially submerged)—and found a trail post with a P (for portage) on it.  If I had put on my glasses, I would have seen the miniscule red portage marking on the map, but I didn’t.  So I crossed back over the creek, went down the trail to the lake and found another P post at a landing that had to be hard to find from the water.  No campground.  So I went back up the trail, thought about an unmapped portage (always use your glasses!), and luckily picked the correct trail to continue to West Chickenbone across the creek. 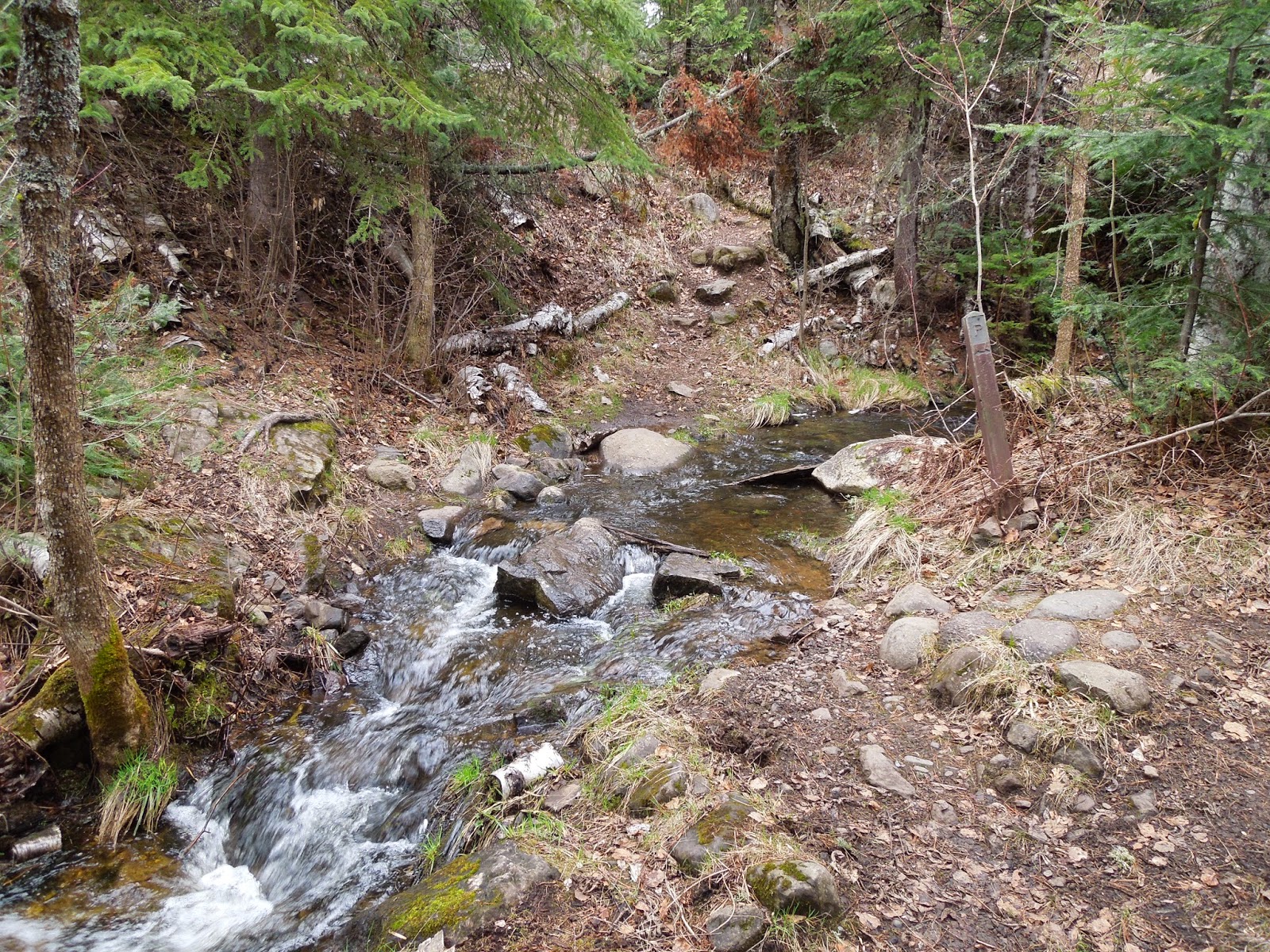 When I got to the West Chickenbone trail post, I headed down off the Greenstone.  The downhill was fairly steep, but short.  I selected the camp site across from the privy, and set up my tent and camp.  This site had a nice board and tree trunk arrangement similar to a picnic table.  But the tent site was mud, similar to what I would find at Hatchet Lake the next day.  It was on its way to drying, but still not something I wanted to set my pack down on.  There was more moose scat at the camp site, but I still did not (and never did) see any moose.  There was a squirrel here that ran around the camp site and across the board table. 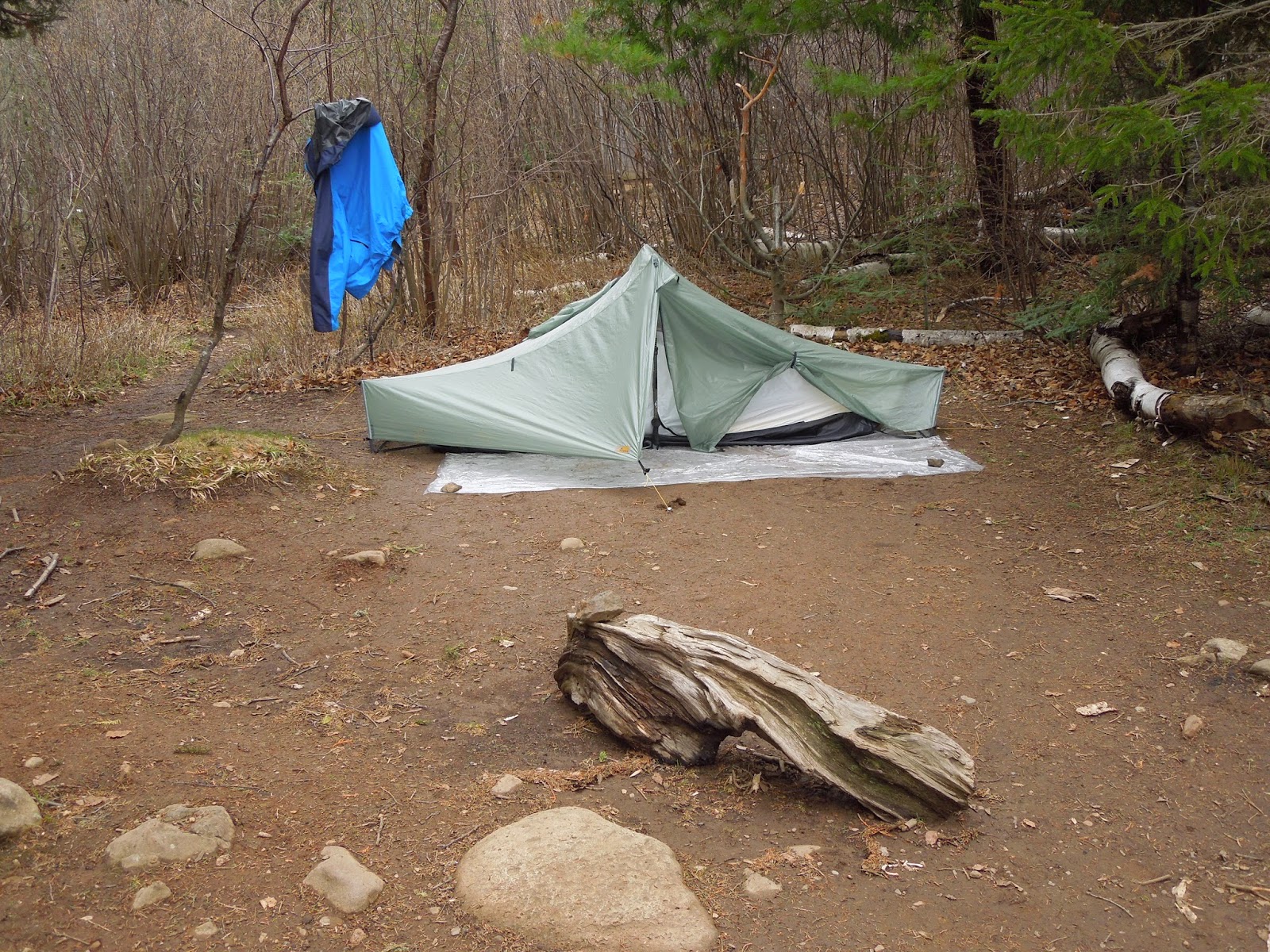 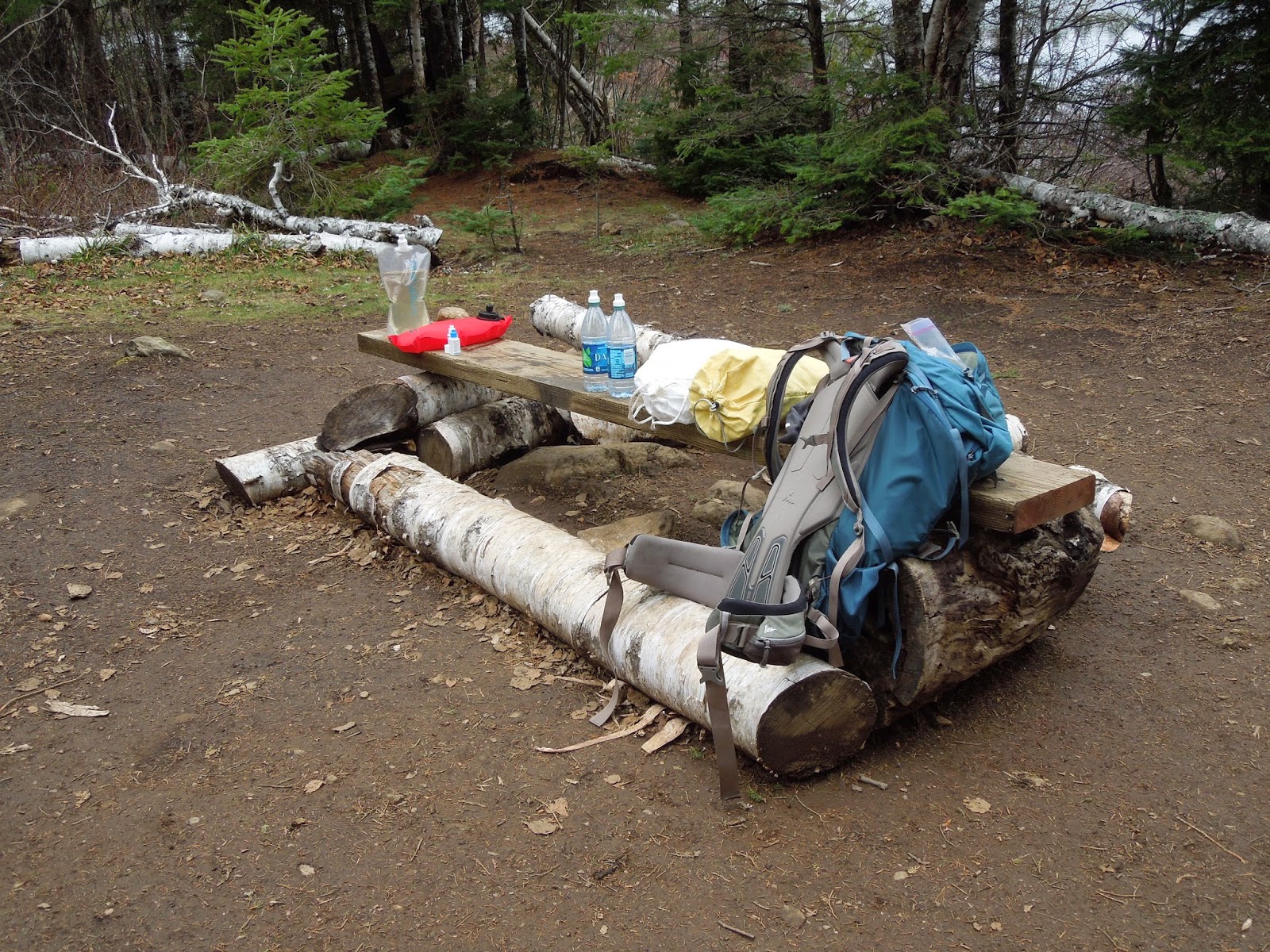 The water I filtered here had a yellowish tinge to it, though the lake did not appear to have an algae bloom.  I found the water was yellowish here, at Hatchet Lake, and at McCargoe Cove.  It was clear again at Moskey Basin.  So where it was yellow, I played it safe and also used Aqua Mira drops.  It took some extra time, but gave me peace-of-mind.

The clouds had come in, and looking north, you could see a storm front heading towards the camp site. The approaching front seemed like what you might read in a book, the way the clouds boiled up from the horizon and started in my direction.  So I finished dinner and packed the tent/contents in the vestibule in preparation for rain.  I got in the tent and started reading.  The terrifying storm hit—and it sprinkled for five minutes.  The sun came out (though I was still inside the tent), and it got hot in the tent.  I took off my extra clothes and settled in for the evening.  The temperature that night dropped to 41, and I was still warm enough in the quilt. 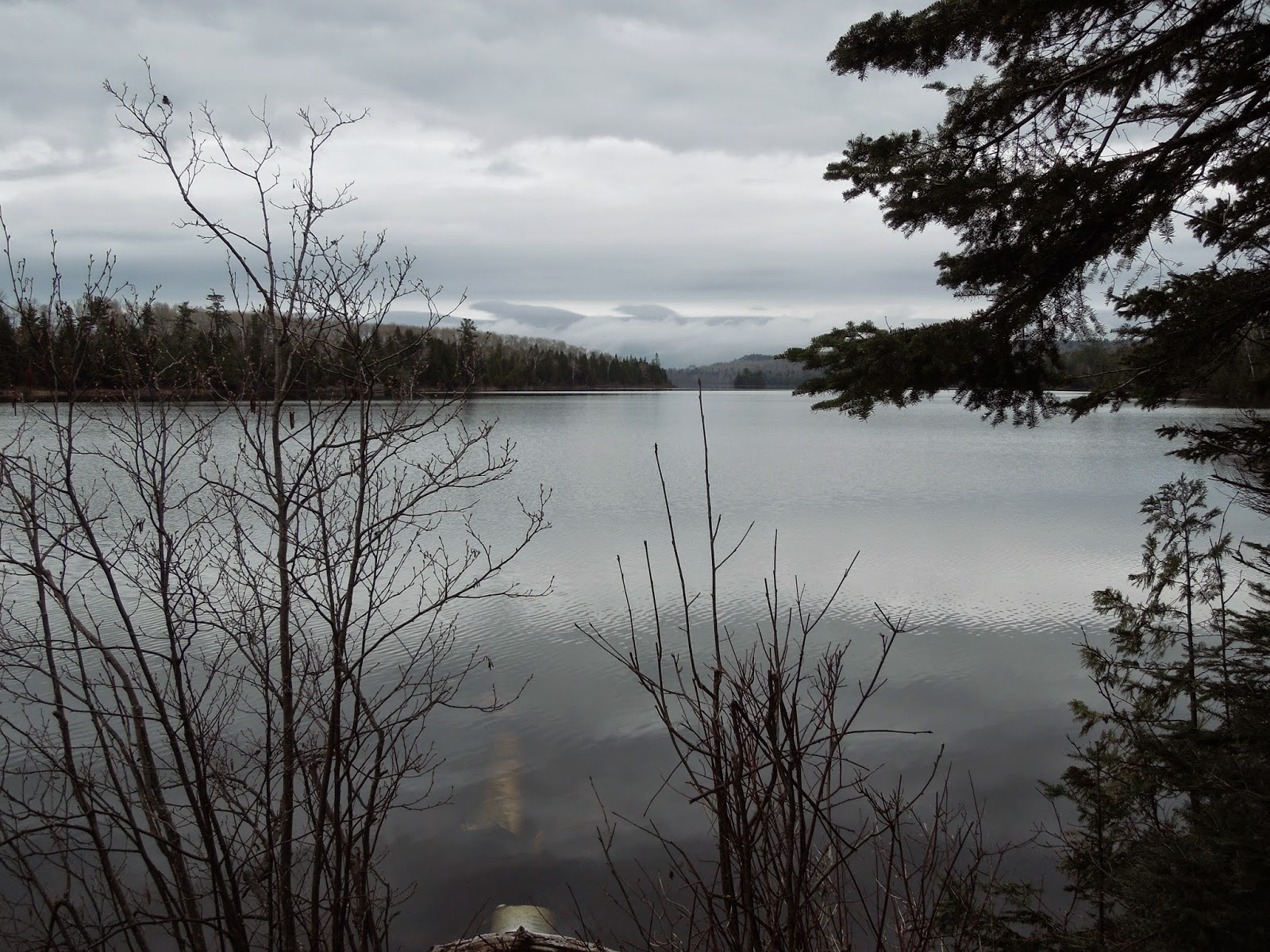 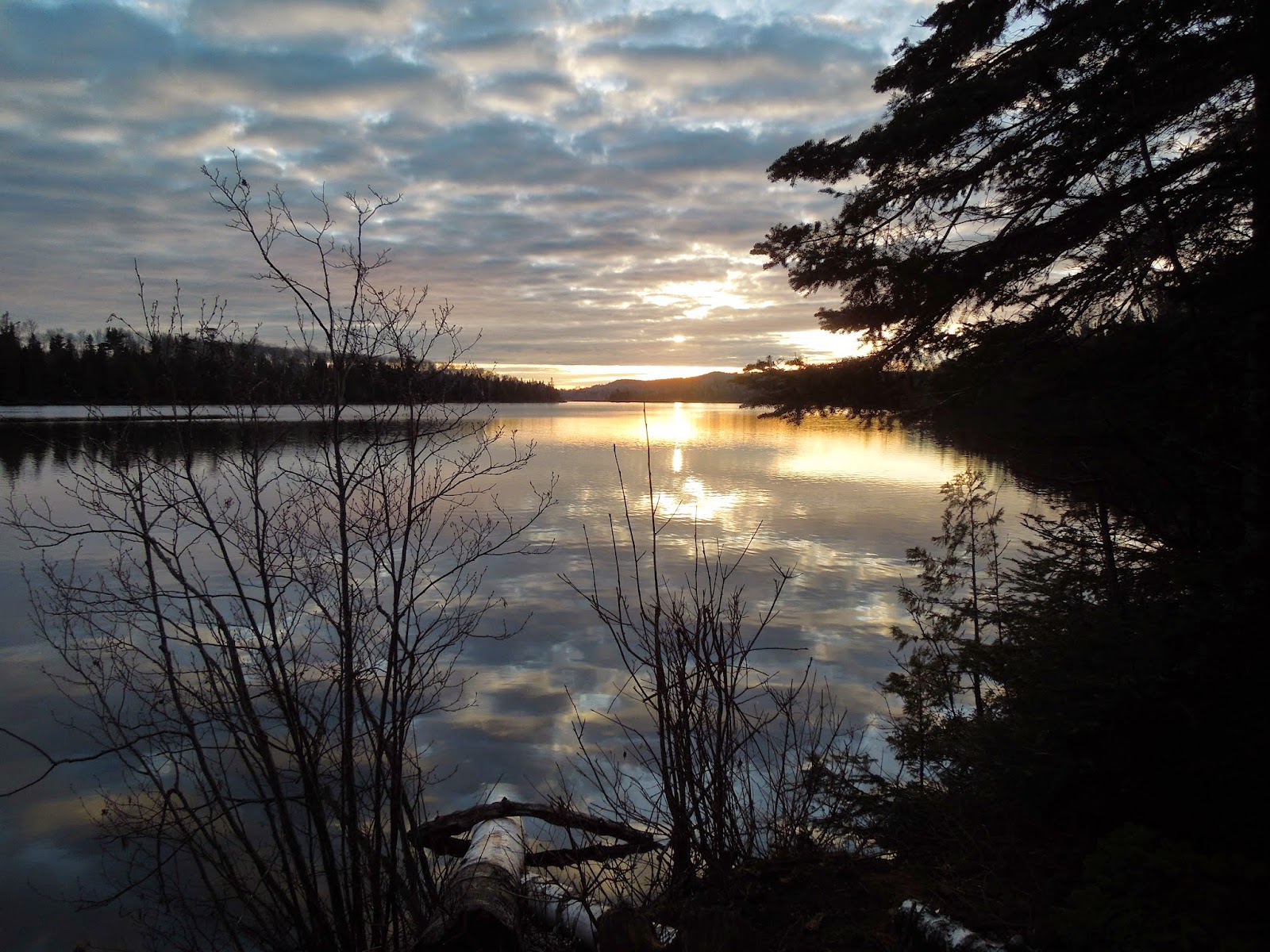