R1 picked me and N3 up at the Holiday Inn at 0800 and we were at the course lodge by 0830.  M2 drove directly to the lodge and met us on time.  R1 provided a briefing and went through some ultralight philosophy, how he implemented it with his gear, and talked a bit about the route and our options.  Then he went through each of our sets of gear and we weighed them.  With our food and fuel we were each about 18 lbs pack weight (excluding water).  R1 was carrying additional equipment and food and was at about 22 lbs.  We each received a canister of bear spray (instruction would come at the trail head).  We had a nice lunch at the lodge and headed out for our drive to the Absaroka Beartooth Wilderness shortly after.  The drive took over 3 hours, with the last part being through some rough national forest roads. 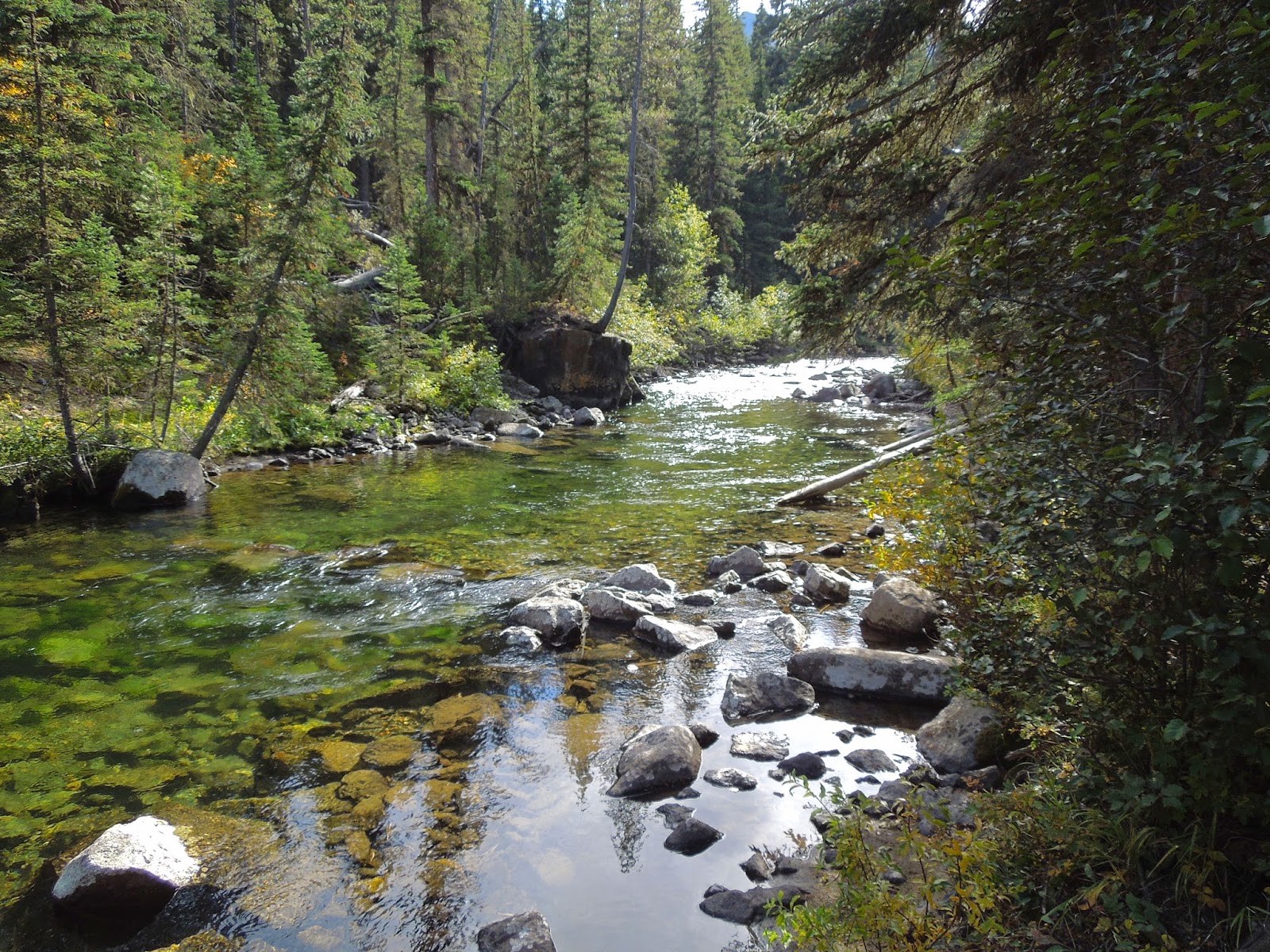 We got on the trail at about 6,600 ft in altitude at around 3:30 pm.  The hiking today was pretty nice with a mild climb up to about 7.400 ft.  The trail was mostly smooth, with some rocky places, and followed a small river up the canyon.  The others were hiking at about my top speed.  I found out I did not like having others hiking on my ‘heels’.  Even when they stayed back a bit, I felt pressure to go faster than I was comfortable with.

The scenery was great, and so was the weather.  We got lucky with an Indian summer period.  It did appear there had been significant rain not long before our trip.  Parts of the trail were pretty muddy, and there were horses' hoof tracks in abundance that nearly tore up the trail in places.  I found out I am not happy sharing wet trails with horses.  What should have been great trail became a morass of muddy challenges. 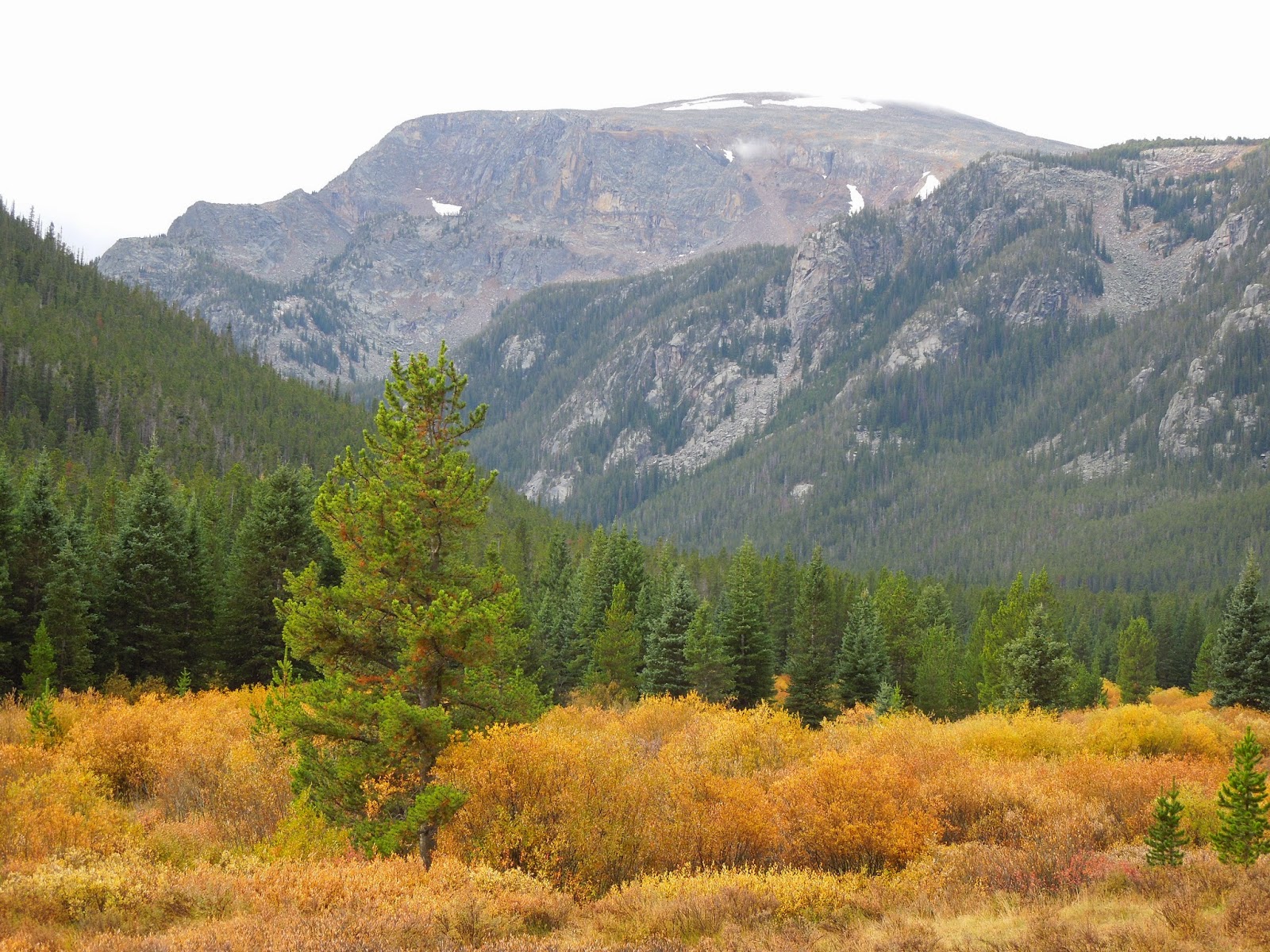 We stopped around 6:30 to camp, after about 6.1 miles, and found a really nice spot among trees next to a meadow to set up our tarps.  We were all using tarps to save weight.  R1, M2 and I all have bivy’s too in case it rained.  N3 for some reason only had a cuben ground cloth instead of a bivy.  For the nice weather we had, his ground cloth was more than adequate..

As soon as our tarps were up, we all moved to an area in the meadow to eat.  R1, M2 and I were all using wood stoves to save weight.  N3 used his alcohol stove, and always got done with dinner earlier.  For M2 and I, this was an experiment, as we had never used wood while backpacking before.  Preparing the fire and using the stove was fine, but I really didn’t like all the soot that formed on the outside of the pot and on the stove pieces.  I used light leather gloves to handle the wood and pot.  And I put the pot and stove in a separate gallon baggie to protect my other gear.  It was a mess and the soot put my other gear at risk if I wasn’t careful.  In the future I will probably stick to alcohol or a canister stove.

I should make some comments on our food at this point.  For dinners, we tended to have meals which included some kind of pasta or rice, a sauce with ghee and/or cheese, and either tuna, salmon or freeze-dried hamburger.  Each was in a plastic bag, but not a heavy-duty freezer bag.  We had to cook in our pots.  For breakfast, we either had muesli or granola with freeze-dried fruit.  I picked granola for most mornings to avoid having to fire up the wood stove.  We ate throughout the day from our ‘snacks’ with no formal lunch.  Most of us had something like Fritos, trail mix, trail bars and/or candy bars.  Dinner and breakfast were each about 600 calories , and the daily snacks were about 1200 calories each.  As usual, I wasn’t able to finish most of my daily snacks.

After dinner we all went to hang our food bags (and pots) to protect the food and us from bears.  We ate, cooked and hung bags all separated by at least 100’ each every evening and morning.  Today’s hang was particularly challenging since the available tree limb was out over a steep drop down to the river.  We had to climb down the bank to get to the bags and line.  Plus it was getting very dark by that time.

I forgot to mention earlier, but we were all treating our water.  R1, N3 and I were using Steri-Pens and M2 was using Aqua Mira.  R1 used the bottom half of a cut off Nalgene canteen, about ½ liter in volume; but I found he had a small Sawyer Squeeze filter/bladder as backup.  N3 used a 750 ml Nalgene bottle.  And I used a foldable 1 liter Nalgene canteen for treatment, then poured it into a Dasani water bottle for use on the trail.  For some reason, I never noticed what container M2 used.

We all got into our bags/quilts pretty quickly after bear hanging.  I think it rained lightly for maybe an hour that night.  The lows were reportedly about 36 to 38 degrees each night throughout our trip.
Posted by CipherGB at 7:35 AM