I don't normally spend time commenting on anything so trivial.  But I thought this mistake was hilarious.  I was reading an article on FoxNews.com titled "A drunk tourist accidentally climbed a mountain while trying to find his hotel," by Andrea Romano.  The tourist was in Italy, and he went up a mountain instead of to his hotel.

How far did he really go? You cannot tell from the article.  But they claim he went up to a closed bar at 1,491 miles above sea level.  He was REALLY HIGH!  Here's a shot of the paragraph and a photo.  They made the mistake both in text and in the photo's caption. 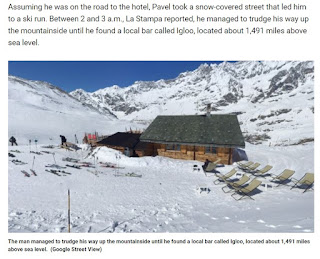 Sometimes, I wonder if they still review articles before online publication.