We had one day to see the park.  The plan was to get up early, drive for two hours to the park, hike a couple of short hikes, and drive along the road through the park.  We would get back about 8:30 pm.  The plan went pretty much as expected.

We went straight up I-25 through Denver and got through about 6:30 to 6:45 without getting stopped in a traffic jam.  After stopping for breakfast, we got to the Beaver Meadows Visitor Center about 8:40 am.  I asked the ranger at the desk about light hikes due to my wife's problems with altitude.  He suggested a hike around Sprague Lake.  He said the trails around Bear Lake and the other lakes nearby were great, but that the parking lot there was already full, and we would have to park and ride the shuttle bus to get there.  There were lots of cars, and nearly every parking lot on the east side of the park was full, all the way up to and including the Alpine Visitor Center parking lot.

Anyway, here's a section map the ranger gave us for the Sprague Lake hike.  Apparently they have these nice little section maps, available upon request, for their hiking trails. 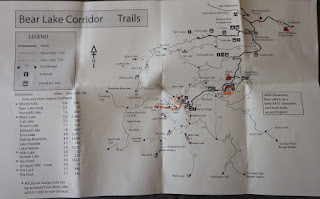 But since we only had one day to see the park, we planned for most of our time to be driving around the Trail Ridge Road.  Here's the overall park map. 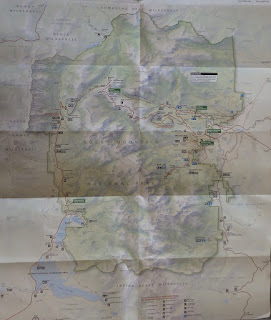 Here's a shot from Sprague Lake. 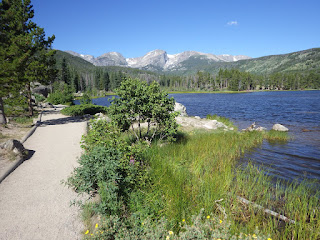 Then we drove on down to Bear Lake to see the crowded, car-packed trail head, and of course the scenes along the way.  Next we drove up to the Endovalley and had some early lunch snacks.  There is a one-way dirt road from that point up to the Alpine Visitor Center, the Old Fall River Road.  Lots of cars were taking it, and many seemed to be 2-wheel drive.  We were driving our 2-wheel drive pickup, and decided to stay on the paved Trail Ridge Road.  Here are a bunch of shots we took mostly from stops along the way. 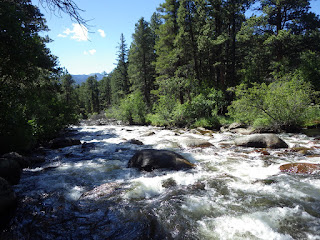 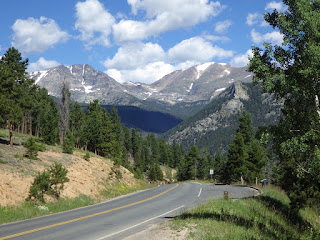 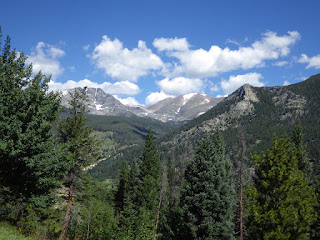 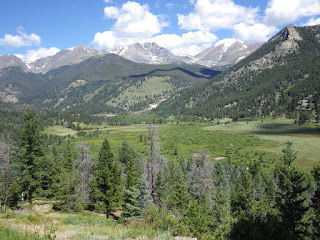 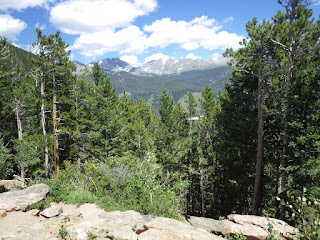 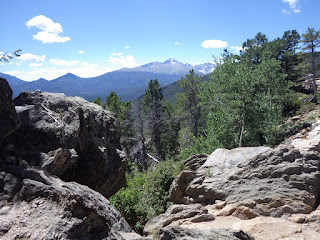 At one point, cars were stopped and moving at a slow crawl.  Turned out a huge elk was sunning himself 50' off the road.  Two other smaller elk were up the hills. 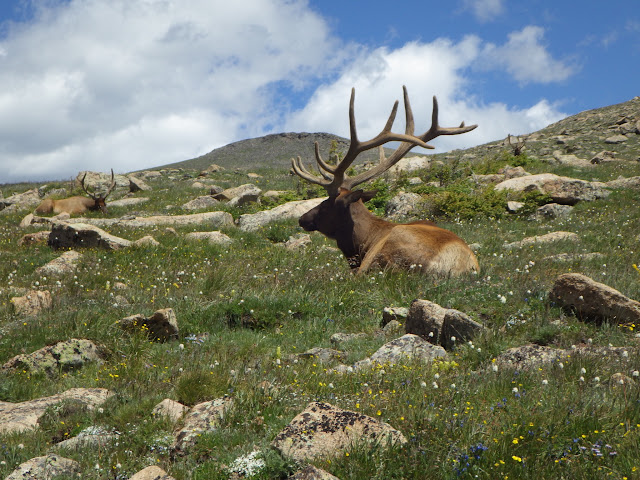 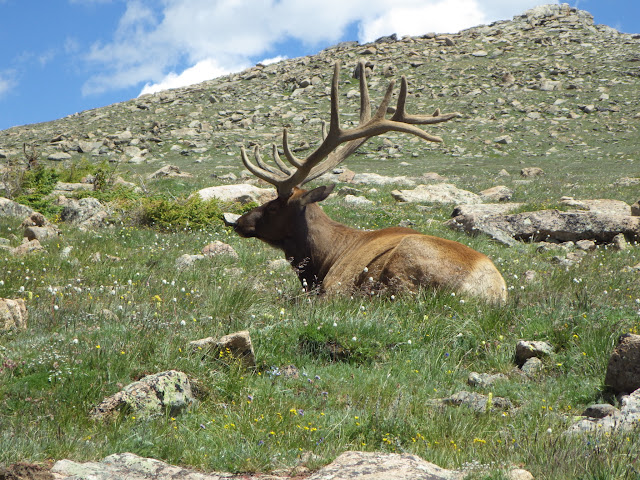 The shot just above was using only my 4x optical zoom on the point-and-shoot Ricoh WG-4.  We kept driving and here are some more shots, including one of my wife from a great overlook. 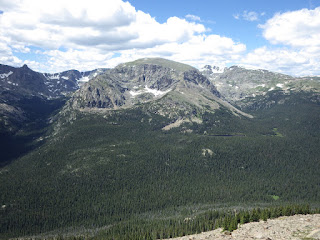 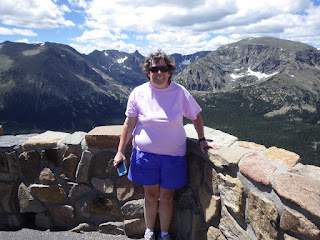 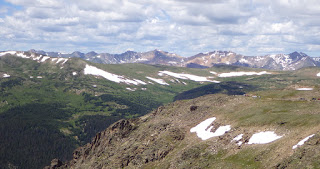 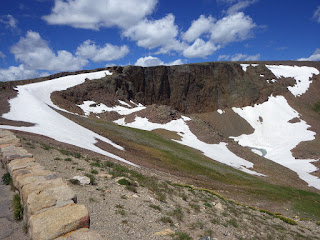 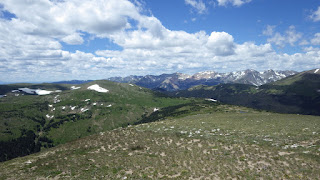 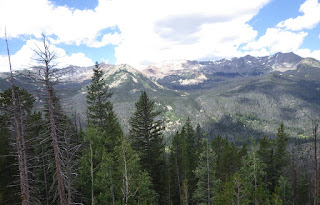 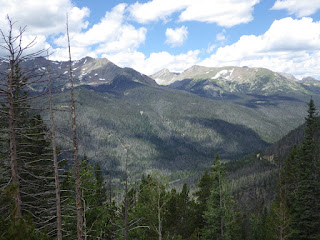 The western section of the road seems to mostly pass through a valley and meadows following the Colorado River.  The river looks more like a stream here.  We just missed shots of a couple of moose, and drove out of the park a little disappointed.  We stopped at the Kawuneeche Visitor Center to get a gift for my nephew, then decided to go back into the park and look for more moose.  In fact, we stopped to see the buildings at the Holzwarth Historic Site that in the early 1900's was a lodge for trout fishermen on the Colorado River. 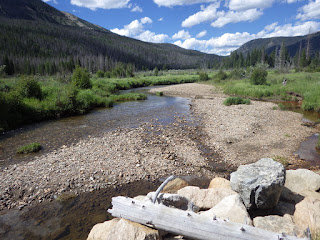 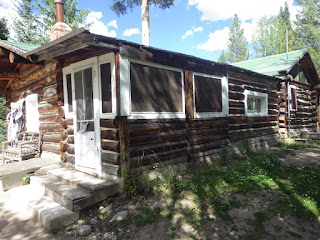 We did in fact see the moose!  Here are some shots along with one of the Colorado. 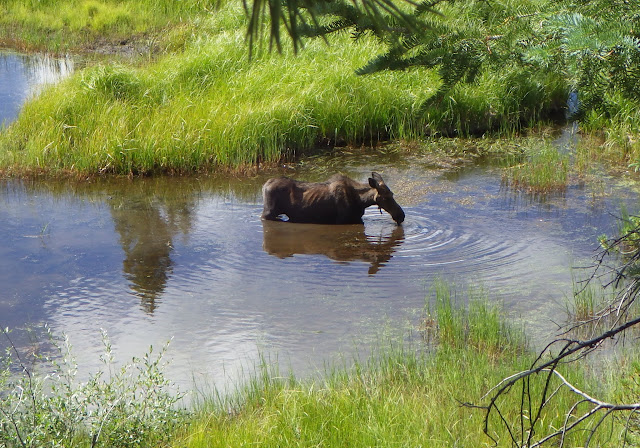 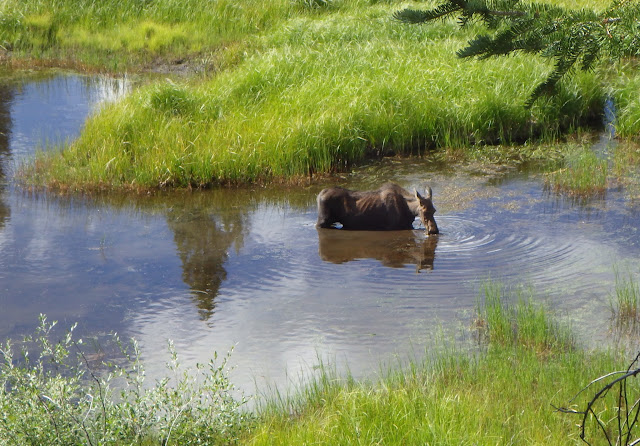 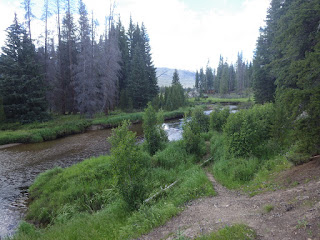 After we finally left the park, we stopped at the Grand Lake Lodge, a national historical site, for a late lunch.  The food was good.  We also drove through the small tourist down of Grand Lake Village.  Then we headed back for the 2 1/2 hour drive to my sister's house.  Along the way, we saw what looked like a blown out volcano, so I couldn't resist the shot. 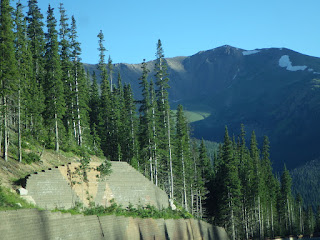 I liked RMNP, but think Yellowstone is better.  If you have time for this park, try to plan some time for hiking.  Have a good day!