Today we drove down through the mountains to the Florissant Fossil Beds National Monument.  The direct route was on the interstate.  I thought the mountains would be more scenic.  They were, but it took a lot longer.  First, Google Maps did a bait and switch.  It gave me three options with the mountain route being the last.  I took it and we started off.  I was having some trouble getting the vehicle bluetooth audio working, so we pulled over.  When we pulled back out, we were on the interstate route, and Google Maps no longer showed the mountain route!  So we got to the mountains the old fashioned way with just the map.  Then we hit a four to five mile stretch in the steepest (15 degree) section with only a gravel road.  So instead of the 1.5 hour interstate route, we ended up taking about 2.5 hours to get there.

The fossil beds were created by a volcanic eruption around 35 million years ago.  The lava/mud flow wiped out a large redwood forest, and today the huge, fossilized stumps of the redwoods can be seen on about a 1 mile hike.  You also see lots of plant, insect and small animal fossils in the visitor center.  And of course the usual short video.  Rainstorms were threatening so we didn't try the longer hikes.

Here's a couple of maps of the national monument. 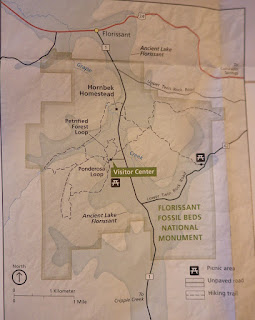 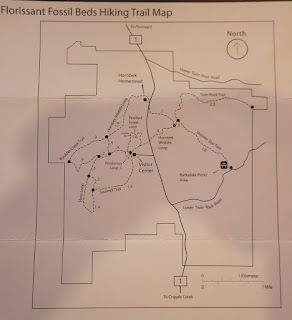 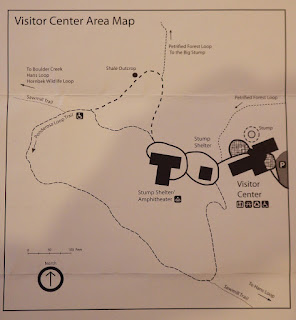 And here are some shots of the fossilized redwoods. 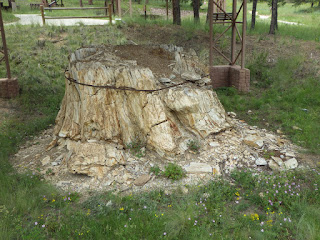 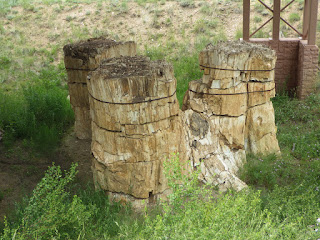 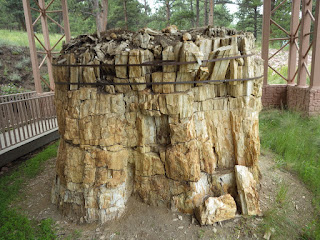 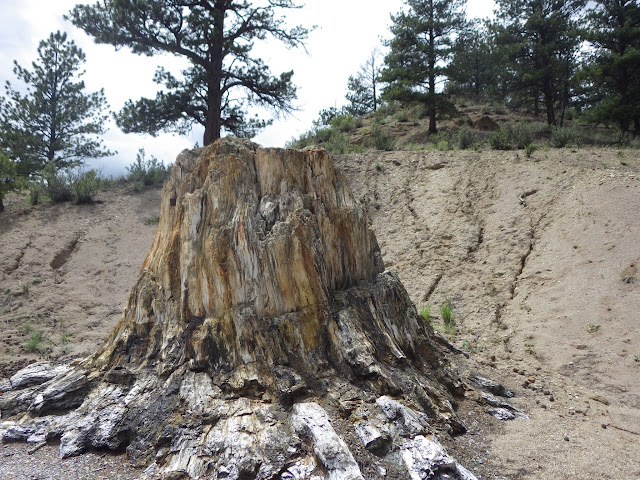 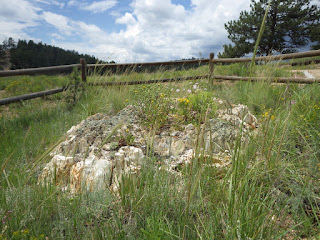 The very large stump two shots above was actually located behind a lodge many years ago.  They positioned the lodge so people would have to pay to see the stump.  The lodge isn't there any more.

At the end of the valley, there's a homestead that was created about 1872 by a single mother, the Hornbeck Homestead.  Here are some shots of the homestead. 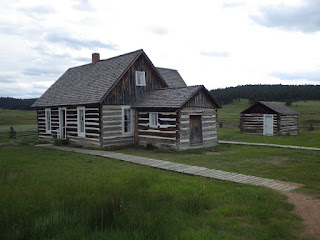 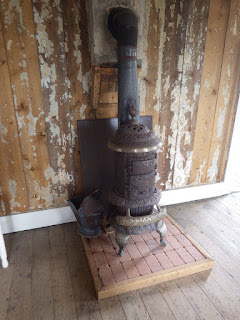 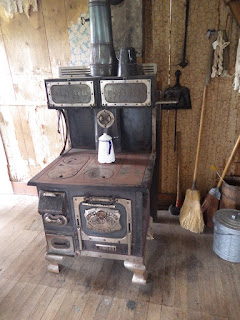 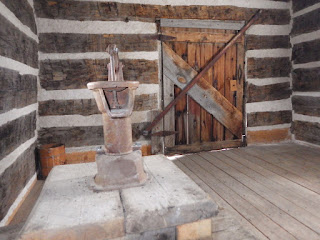 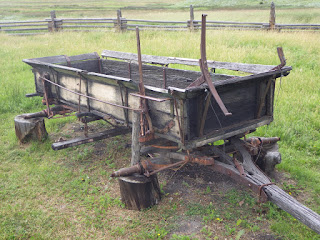 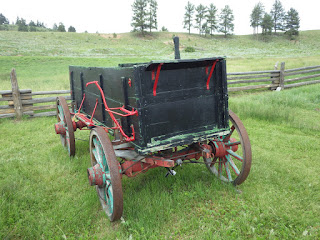 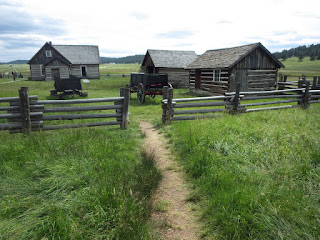 On the way back, we passed Pikes Peak.  My wife had talked about going, so we drove up.  We expected the toll to be a few dollars.  It was $12/person.  The car in front of us had kids, and they turned around.

It was a 19 mile drive.  We didn't do the planning, so we didn't really have the choice of taking the cog train up to the peak.  The threatening clouds were getting bad, so we didn't stop on the way up.  Here's a map of the route. 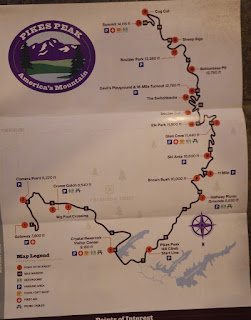 We did see some bighorn sheep.  They seemed to be licking up some liquid I think a driver tossed out. 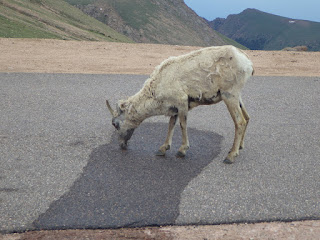 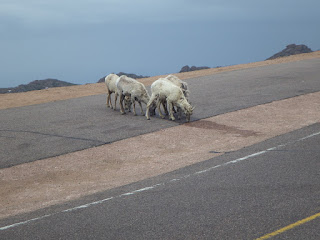 We didn't get into the clouds until a couple of hundred feet from the top.  At the top it was 39 F, windy, and somewhat dark.  Since we hadn't planned to drive up, we just had wind shirts.  It was cold!  Here's some shots at the top. 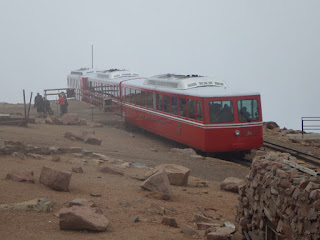 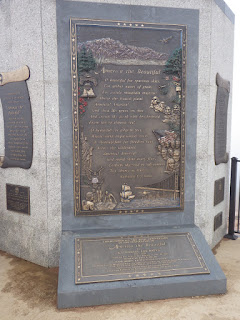 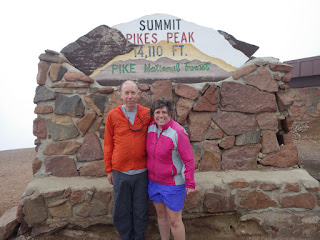 As soon as we started down, it started to rain.  With the steep switchbacks, it seemed pretty slick.  My wife was driving, so we went down pretty slowly--though I would have driven slowly too.  Just below the peak, the rangers were stopping cars from coming up, and turning them around.  We later found they were stopping cars about 5 miles down too.  We pulled over to let one tail-gaiter go by, and a ranger pulled up next to us and told us to slowly make our way down.  I did get a couple of shots on the way down.  Here is one. 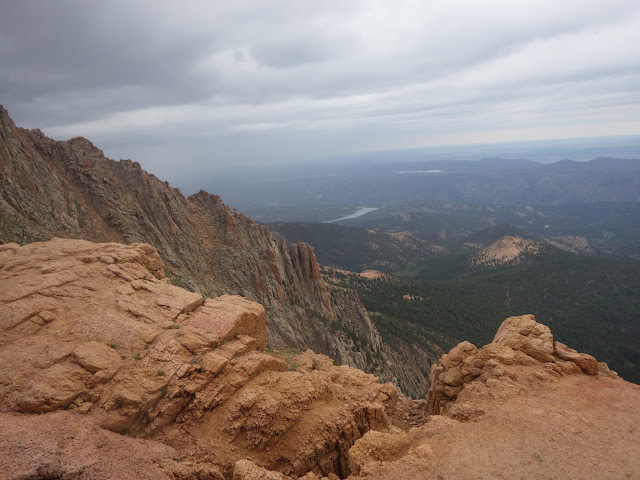 The drive back was pretty bland with some sprinkles.  I enjoyed the fossil beds, and they would be good for a light day's activity.  Pikes Peak is an interesting drive, a little expensive for views you could get backpacking.  But don't go in bad weather!

Have a good day.