My wife, I, and my sister went out to Palisade, CO on Tuesday the 15th.  My wife and sister were planning to do the wine country tours the next couple of days in Palisade, which has 20 wineries.  My brother-in-law and nephew were going to join us on Wednesday, and the three of use were planning to camp and hike for a couple of days.  Palisade is just a few miles from Grand Junction, Fruita, and the Colorado National Monument.  Except for the monument, most of the land around this area seems to be forest service.  In this and the next post, you will see some of the hiking opportunities.

I stayed with the ladies for some wine tasting Tuesday afternoon.  Then on Wednesday, we went to the Mesa County Fair in Grand Junction.  It was a nice fair with the usual 4-H exhibits, animals, food, entertainment and rides.

When the guys arrived, around 4:00 pm on Wednesday, we took off to set up our tents in Saddlehorn campground in the Colorado National Monument.  The plan was to do that quickly, then return for the tractor pull at the fair.  Alas, we encountered some difficulties.  The campground was just south of Fruita and took about 35 minutes to get to.  Our site wasn't flat!  But we couldn't find the host to try and change sites.  I had paid early for a two-day reservation, and didn't want to lose my deposit.  So we set up our tents on the least sloped areas.  But it was mostly rock with a little sand.  So no staking.  I found rocks to pile on my stakes that seemed good enough.  But the wind came up while we were setting up, pretty strong, and caused us to use more anchors than our initial set.  Then a rainstorm came in while we were only half through setting up.  It didn't stop.

We ended up driving into town to eat.  We were a little too late to see the tractor pull, and we weren't sure it would even be held in the rain and lightning storm that continued till about 8:00 pm.  Here's a shot of my tent showing some of the rocks I used to stake it out. 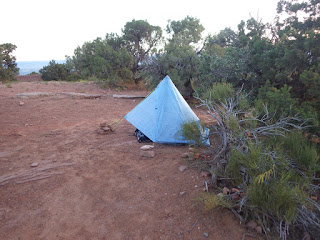 The next morning, we got an early start for the 15.5 mile hike on the Rattlesnake Arches Trail.  The trail head is just north of the Monument very close to the Colorado River.  This was the first time for all of us for hiking in this terrain.  The blogs I had read indicated no water (correct), a little bit of climbing, and a long hot day.  In my opinion, they were only partially correct.

There are a couple of trail heads.  The one closest to the seven arches requires a high-clearance, four wheel drive vehicle.  We didn't have one of those, so we took the long way in.

My expectation was a clearly marked trail with lots of ups and downs.  I had a one-page printed topo map, my inReach Explorer for track logging, and my iPhone set up with Gaia Pro and a downloaded GPX track of the trail.  This was my first time using Gaia Pro while hiking, I've been using other apps.  Gaia wouldn't access the GPS receiver in airplane mode.  I had to turn off airplane mode every time I wanted to see our position.  That ate battery like mad.  Worse, I had inadvertently left the cellular radio on the night before and I was starting with only 62% battery.  To save battery, we checked our position with Gaia only once in a while.

That turned out to be a bad approach to this trail.  Many of the downs seemed to be down steep canyon walls.  And there were only the occasional cairn to show the way for those descents.  Plus, people had set up cairns for other 'trails' and there were other paths that looked as widely used as the trail to the arches.  We had trouble staying on the trail soon after the human/horse trail options split.  We didn't take the horse trail option (said to be more scenic but longer), which turned out to be a bad mistake.

The first steep descent was marked with cairns.  Looking down the canyon sides, it looked like more cairns followed a slip rock ledge around the canyon down a ways.  It looked dangerous.  And a trail continued around the top edge of the canyon.  We followed the trail.  What we found on the return was that the descent actually doubled back on a reasonable climb down.  But we didn't see that.  We took the path along the top until we found a place to descend at the head of the canyon (bushwhacking).  It was fun, but hot, tiring, and time consuming.  Here's the plot of our whole day's walk.

The trail head was in the upper right corner, near the river.  The section where the trail diverges shows our bushwhack on the way out, and the real trail on the way back.

Our furthest point out was following cairns and a path that was quickly diverging from the real trail.  When we finally checked Gaia, and walked back to where we had left the trail, we found a steep descent.  I figure this is where the blogger estimated 3.5+ climbing down.  I'm not real comfortable with heights, and I had a heavy (25 lb) pack for training.  Plus, it was now 1:30 pm, and if we continued to the arches, we would have only been 1/3 through the whole trail.  I recommended we abort and perhaps take some short hikes in the Monument for the rest of the evening.  We did stick to the trail on the way back.  And I got back with 7% iPhone battery.  We got to the trail head around 4:00 pm.  I should also mention, my nephew is 12.  So we didn't go too fast, mainly to allow him time to have fun on the trail.

The scenery is fantastic.  Here are some shots from the trail that include my brother-in-law and nephew. 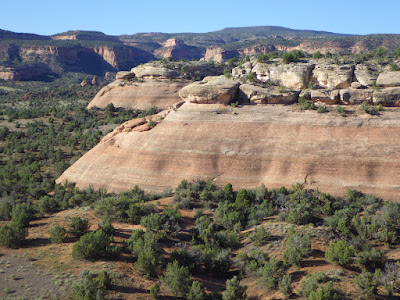 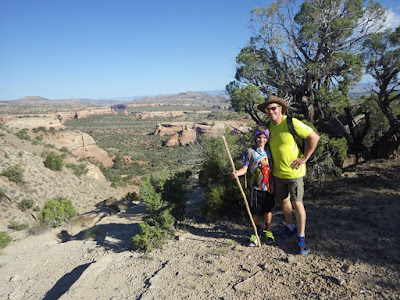 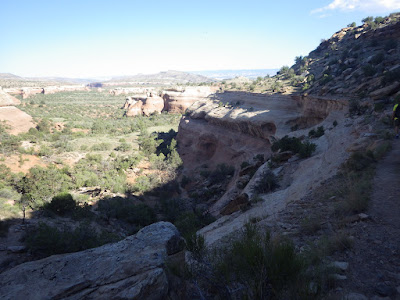 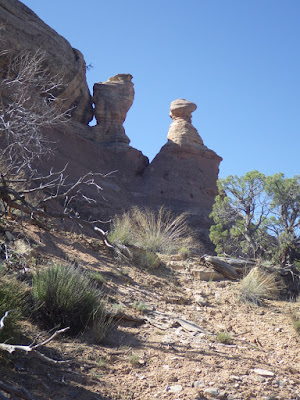 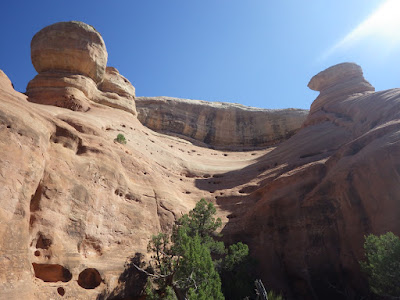 We also saw a collared lizard (?) with bright colors. 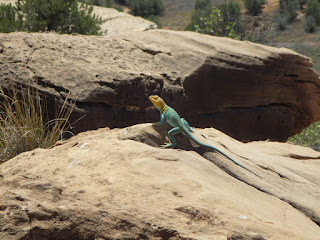 The Colorado National Monument has some very impressive canyons, monuments and landscape.  Plus some bighorn sheep along the road.  We brought the ladies out and drove them along Rimrock Drive until about 7:20 pm.  Here's a map of the monument and the drive. 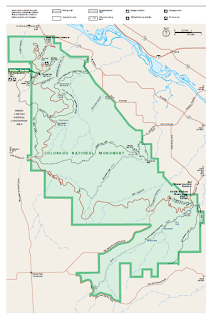 And here are some shots of the canyons and monuments on the drive. 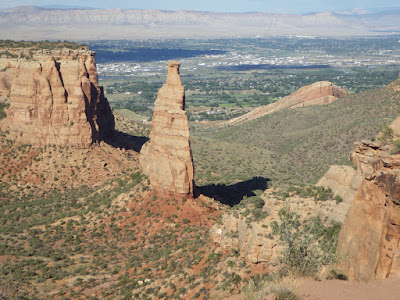 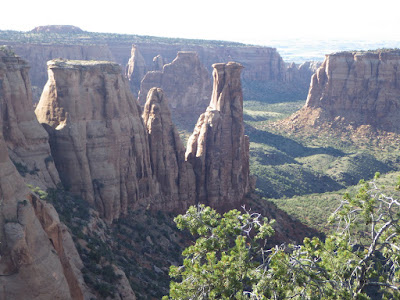 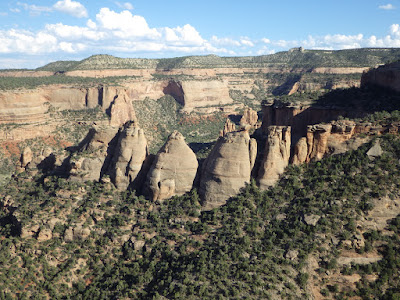 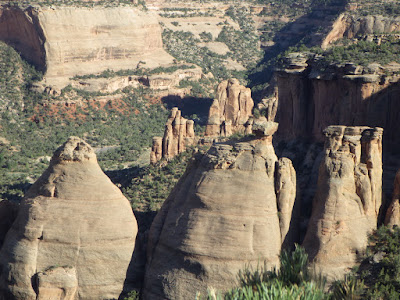 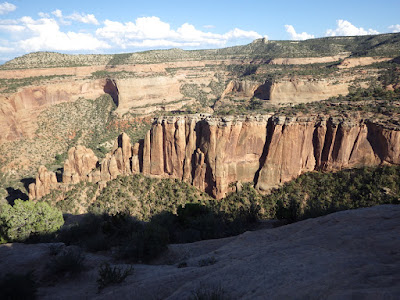 I wanted to highlight the content of this next shot.  They said it looks like a mummy.  To me, more like a sarcophagus.  Also, just a few feet walk around the rim, you come to an echo area.  The echos are fantastic and there seems to be little signal loss in the return. 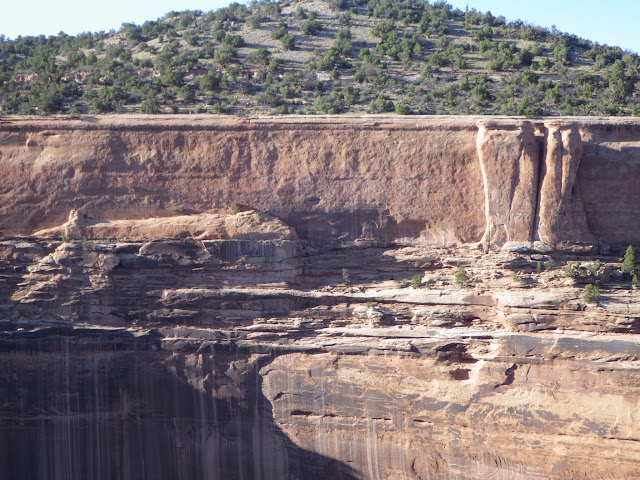 The next two shots of sheep were taken earlier with my iPhone, so the quality isn't as good. 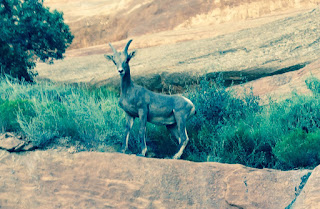 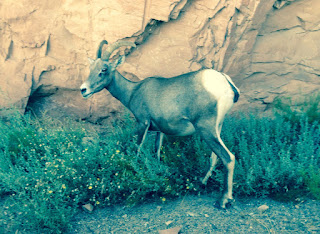 I would highly recommend both the drive and the hike to anyone in this area.  If I get a chance, I would like to try the Rattlesnake Arches Trail again, this time taking the horse trail option.  :-)

Have a good day!