This morning was much like the others, though I think Dan got up after me (not sure about that). :) Ken was up and getting ready when I got over to the camp to cook breakfast.  At 0730 he took off to meet Tom for their hike up to Eolus.  About 5 minutes later he came back.  Apparently Tom wasn't going to be ready till 0800.

After Ken took off again, and we all finished breakfast and water duties, the four of us took off down the trail a bit to look for mountain goats.  We hadn't seen them, and they were supposed to be everywhere.  Tom had said they came down from the mountains every day about 1000 and would walk near our camp.  We wanted to find them.

Unfortunately, it was bow hunting season, and the group of hunters that got off the train with us had already gotten their limit and were headed back.  Apparently they had killed one right near the trail.

As we walked down the trail, I looked up at some bluffs and saw some white dots.  After staring a while, we saw them move.  And with a 5x zoom camera, they vaguely resembled mountain goats.

We spent a while on the trail, but they didn't move.  Finally, we backed off into the woods near our camp and sat waiting for them to move.  After a while, Steve spotted one in the woods and we got some fair photos.  Steve got the best ones.

Then Dan and I got our rods out and got ready to try some fishing.  Dan had an expandable casting rod with some traditional lures.  But the creek was pretty narrow and rocky.  So he borrowed one of my fly's from my Tenkara kit.  I was a little worried about my own set up.  I have an 11'9" rod and had 30-40' of line set up for lake fishing.  It was way too much for the relatively narrow, and rocky, stream.

Well, we climbed down and Dan went a little downstream to some rocks overlooking a decent pool.  I went upstream just a bit to a stretch that wasn't too rocky and had only one downed tree near the end of the stretch.

I let my line out, and it was way too long.  So I brought it back in, nipped out a section, and retied it together at about half its original length.  I looked downstream, and Dan was clambering over the rocks towards his pool.

I tried throwing out my line more naturally, and I watched it drift towards the downed log.  It went under the log, and when I tried pulling it back, it was stuck.  So I took off my shoes and socks, rolled up my pants legs, and waded out into the rocky, freezing stream.  The temperature was survivable, but the medium size rocks were sharp and painful.  The fly didn't seem too hard to get back, and I went back to the bank.  Figured I needed to cut and splice to make the line even shorter.

But about the time I got back to the bank, Dan arrived.  His fly and line had wrapped around some logs, and he'd gone down to try and get it back.  But it was impossible, so he had cut it off.  He didn't want to try again.

So my fishing on this trip was pretty short.  Two throws! :)  I must say, the water felt pretty good on my feet.  I'm not sure why the others thought it was too cold to dunk their feet.

So we went back to camp, had some lunch, and chatted for quite a while.

At 2:00 pm, it rained again, but just a few sprinkles this time.  I think it stopped about the time we got to our tents/tarp.

If I remember correctly, Ken came back from Eolus about 3:00 pm.  He and Tom had done North Eolus, but had decided against the crossing of the catwalk to Eolus and the time consuming climb up afterwards.  They didn't want to risk getting caught in a storm, and some serious climbers had turned around when they saw the narrow catwalk.

The rest of the evening started much like the others.  We sat around, had dinner, talked, filtered water, etc.  The plan for tomorrow, our last day here, was to get up and pack up about 0900.  Since it took us 5 and 6 hours respectively getting up to the basin, they wanted plenty of time to get back down.  Though our train wasn't scheduled to pick us up till 3:30 pm.  I figured we were cutting our time in half on any downhill returns, so we ought to get to the Animus River and the Needleton flagstop by 1200.  Though I wasn't sure about Matt's knee and how slowly he would go.

Well, the evening didn't end quietly as we expected. Right about 0730, just a couple of minutes before sundown, two ladies came up the trail, and tarried near Dan's tent site.  He walked over to talk to them.  Pretty soon another group of 10 came up.  It was now getting dark.  They all start setting up their tents right around Dan's.

Dan comes back to us, and says he pointed out that 5 minutes up the trail were empty camp sites, good sites.  He said the older of the two girls said their party had a bunch of novices and they couldn't go any further.  They promised not to party and to be respectful.  He said an older gentleman brought up the rear, and said he wouldn't have allowed them to stop next to us if he had known.  Dan said he thought it might have been an REI training trip as everyone had REI gear.

Anyway, we hit the sack as it was getting pretty dark.  Dan's tent was over right near the middle of their 7 or so tents (12 people).  My tarp was pretty close.  The other guys' tents were 20-30 feet further away.

Well, maybe they did not party.  But the loud talking, yelling back and forth and joking was not conducive to sleep.  Worse yet, every one of them seemed to have a high-beam headlamp pinned to their head, and they all seemed to walk around at random.  No red headlamps for this group.  I've got a light-weight cuben tarp, and every time one of those beams hit my tarp, it lit up like a Christmas tree.  They showed no respect for us.  Dan said they all decided to tramp down to the stream in the dark to get water--going right past his tent.

Dan said it got so loud, he finally got up and went to talk to them.  It worked, and they got pretty quiet after that.  But I didn't know that till later; I thought they had quieted down on their own.

I was thinking some very uncharitable thoughts about doing physical harm before the final headlamp shut off a couple of hours later.

After that, I got a good nights sleep... until the headlamps came on the next morning.

I didn't take too many pictures today.  But here are a few...

The three small white blobs to the upper left of the bluff are mountain goats. :) 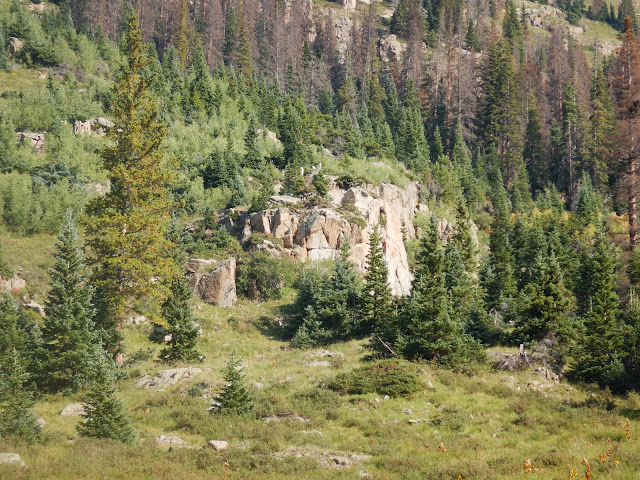 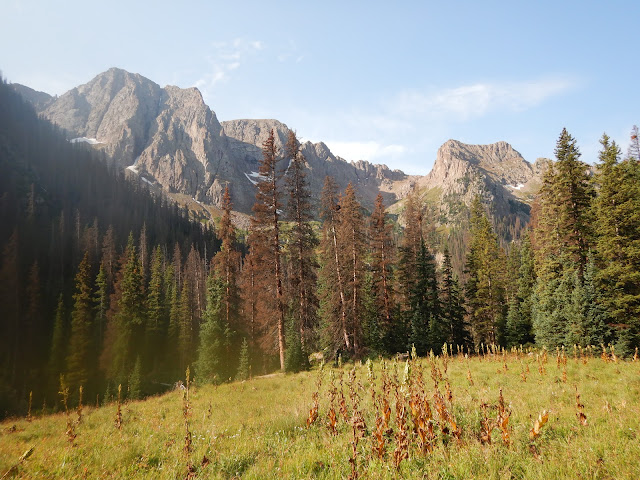 Matt and Steve waiting for the goats to come down... 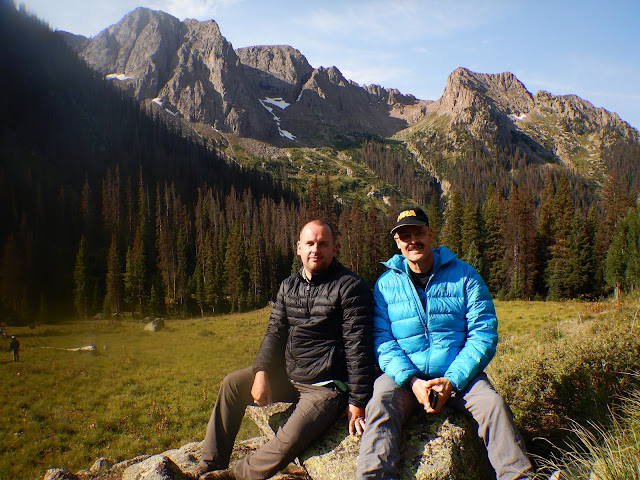 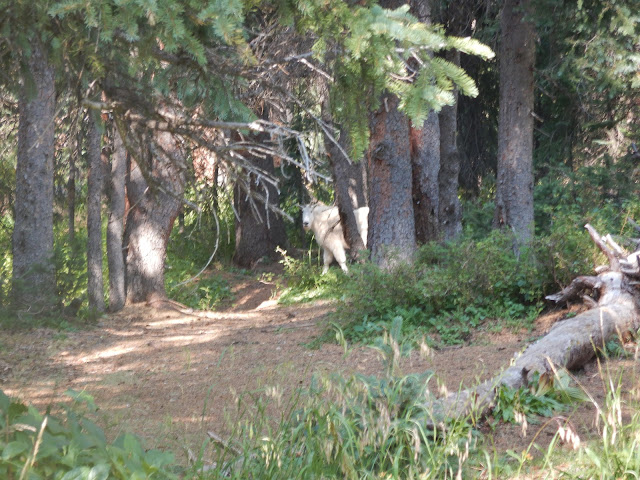 And I just had to include a shot of Matt's taught tent. :) 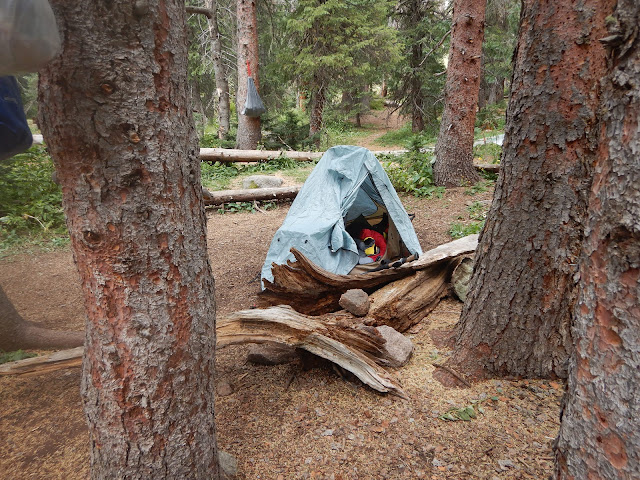 And this is the view out of my tarp. 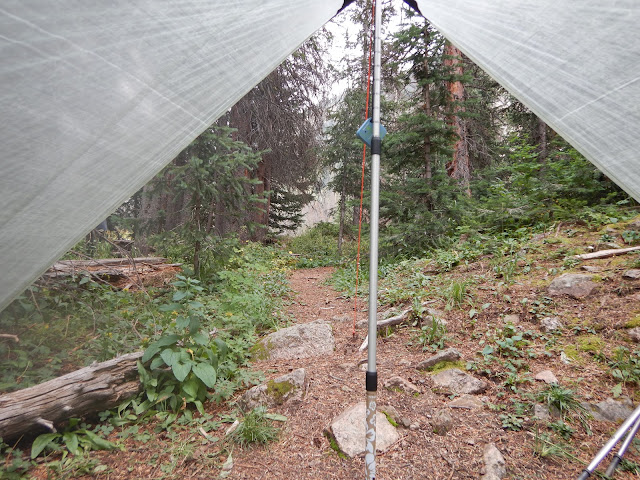