This morning was much like the previous day.  Dan and I got up early, and the others struggled out.  I got into the habit of taking my toilet paper and trowel out early, before doing anything else.  The cat holes were hard to dig.  There seemed to be roots everywhere, and when you didn't hit a root, you hit a rock.  Bagging the toilet paper in ziplocks wasn't as bad as I expected, though I triple bagged it just in case.

Ken and Matt were a bit slow in rising.  They had said the night before they were just going to stay around camp today.  But they changed their minds and decided to go to Columbine Pass with us.

Dan and I left about 0845.  Matt was still filtering water, and I think Ken was packing up.  Steve was waiting for them.

I kept up with Dan for about half the trip.  When I stopped for a snack he was just out of sight, and he never stopped--till he came to a cabin and mine.  The trail to Columbine Pass is different than the one to Twin Lakes.  Through Chicago Basin, obviously it is the same.  Once it splits, today's pass does a more gentle climb through woods and meadows.  It seems lots longer, but slightly less strenuous.  And my breathing was improved.

I stopped for my snack at a little over an hour, for just a couple of minutes.  Shortly after I started back on the trail, I came to Dan, a log cabin (rundown), and a mine (looks like a small cave) with rails coming out of it.  I went in a couple of times with my iPhone and then my camera, trying to get good pictures.  The brand new, just out Nikon Coolpix W300 camera didn't want to flash, and sometimes it wasn't focusing.  So I went back in with the iPhone.  It too didn't want to flash!  I checked its settings and found the flash was off.  Then I got a couple of reasonable shots.  The mine was cool!  Water was all over the place, but you could walk on beams and rocks and steady yourself with the walls and ceiling.

Of course Dan left before I did, and I did not catch him again till we got to the pass.  After a while, the trees, and meadows transitioned to open space and desert scrub.  Ahead was this massive ridge with this little line of a path switching back and forth all the way across the ridge.  It looked like it would take forever to get up there.  I stopped for a second snack, and fairly frequent breathing rests.

Every once in a while, I saw Dan as a small spot way ahead.  As fast as Ken goes, I was surprised he hadn't caught up yet.

Just before I saw Dan get to the last traverse up to the top of the pass, I saw Ken and Steve coming up below me.  I yelled and pointed Dan out to them.  He looked like he was crossing a pretty precarious narrow path.

And that last traverse was precarious.  Loose sand on rock at a steep pitch with a thousand foot drop if you slipped.

We ate lunch, took some pictures, and talked for a while.  The trail down to Columbine Lake looked steeper than the one we had just climbed to get to the pass, and even Dan didn't want to try going down to fish.

So just after noon, we started back down.  Dan and Steve took it slow on that first sandy downhill traverse.  I creeped along!!  And Ken brought up the rear.  By the time I got through the precarious steep sandy area, Dan and Steve were way ahead.  Ken and I sped up, but never caught Dan.

We caught up to Steve at another cave (oops, mine) midway between the previous mine and Chicago Basin.  Ken thought it wasn't going to rain, but I bet him it was.  We followed Steve for a while, but he was sightseeing now, and not going very fast.  Because of the threatening clouds, I decided to hoof it the rest of the way, and Ken decided to speed up too.  I followed behind him to camp, while Steve brought up the rear somewhere out of site. 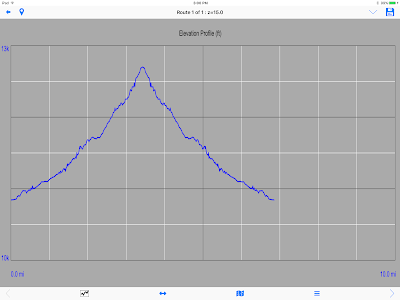 Like the day before, it started raining and thundering at 2:00 pm, just after we made it back to camp.

Today it didn't last long, and by about 3:00 pm, we were out of our tents/tarps and gathered back at the central camp area.

Yesterday, we had talked about options for tomorrow, and the plan was to make an attempt at Windom by Dan, me, and Steve.  Matt had already bowed out because of his knee.  Ken was going to try to get to Eolus with Tom (the visiting hiker).

As we sat and talked, we first decided to try a 0730 start, instead of the 0900 we had done the last two days.  Steve kept talking about the length of time it would take us to get up there and back.  And it finally became obvious, he wasn't even going to try.  Then Ken's discussion of the last 300 yard scramble on Windom seemed to get to Dan.  He finally said he wasn't going to try either.

At first, I was pretty happy.  I was still getting winded going uphill, and I had significant doubts that I could make it before the storms.  However, overnight, my mood changed.  I thought a bit about getting up and starting at 0630 on my own.  But I didn't want to take the risk of climbing to the top alone.  Anyway, the attempt of Windom didn't happen for most of us.

The plan shifted to Dan and I trying to fish in Needle Creek.

The rest of the evening was enjoyable, but nothing happened worth mentioning.  We ate, talked, and filtered water.  Then we hit the sack.

As usual, here are some of the day's photos... 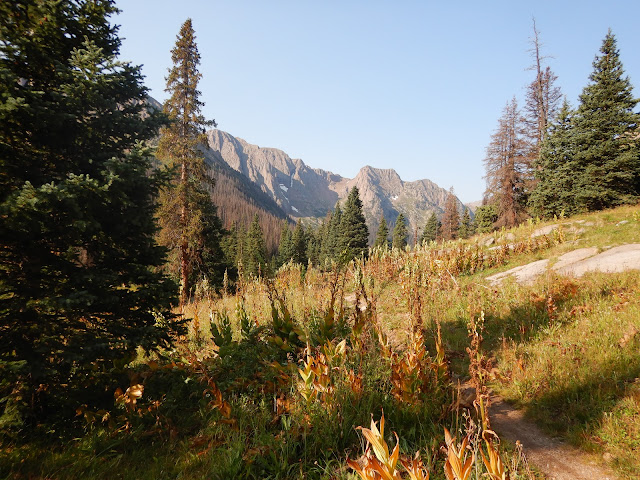 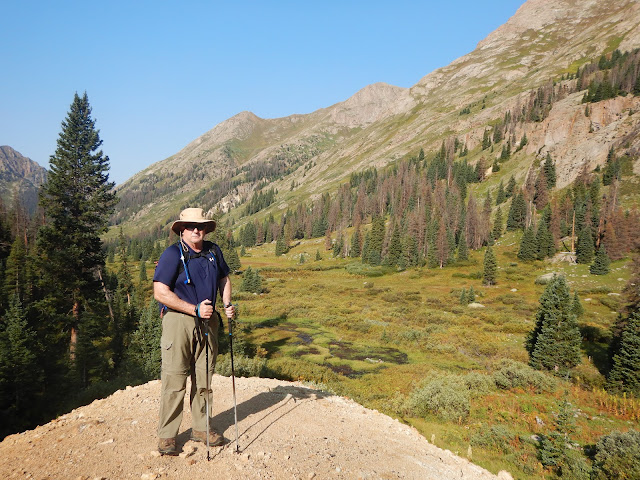 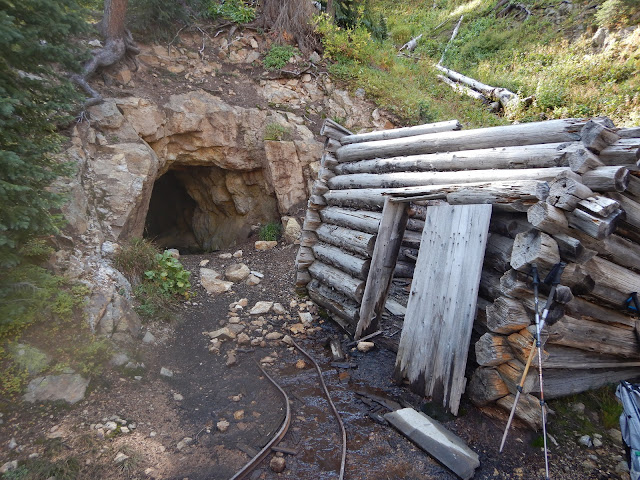 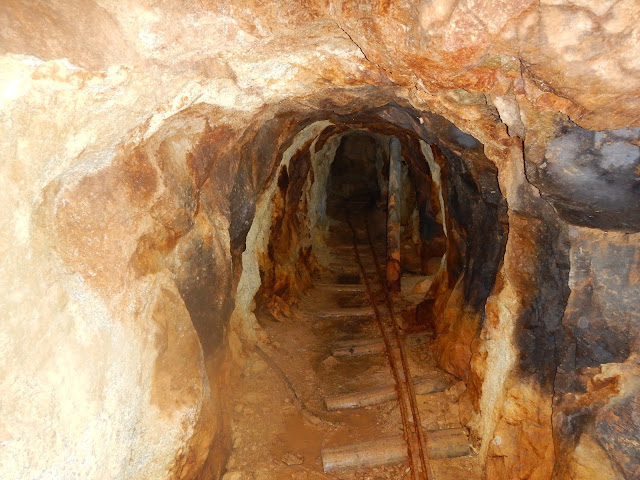 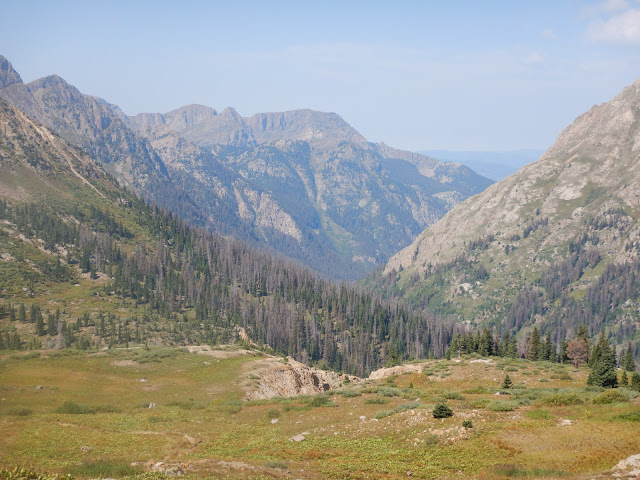 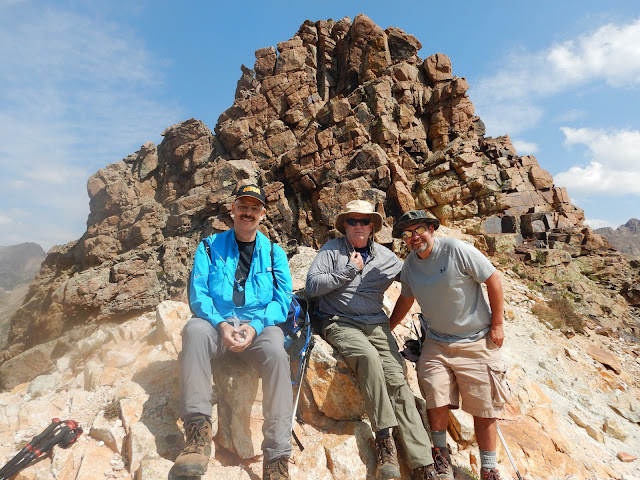 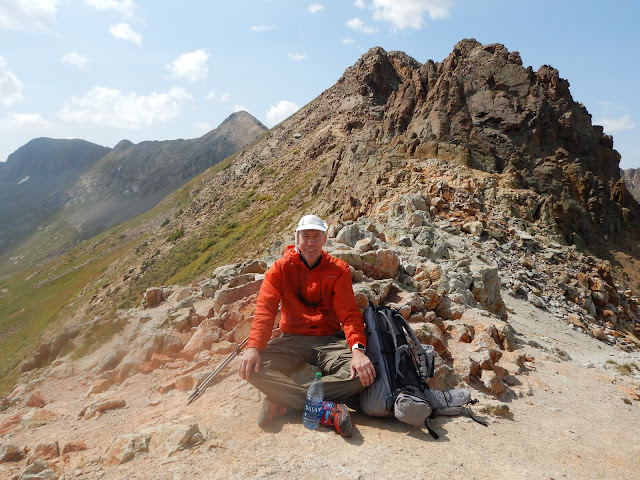 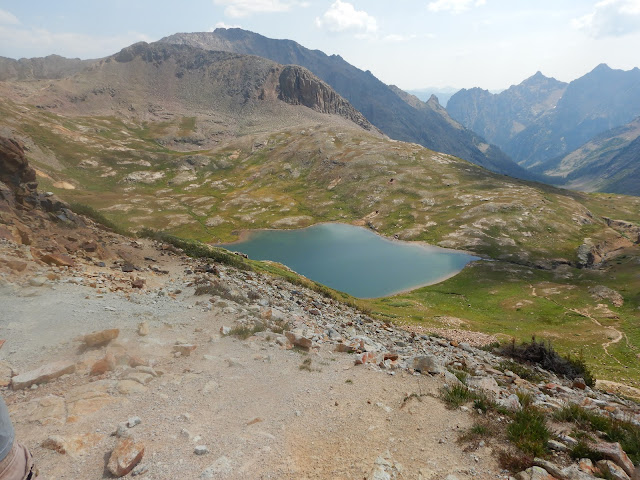