No one wanted to push it today after the tiring climb in yesterday.  It turns out Dan and Ken went further up Chicago Basin the afternoon before, but found a LOT of tents, so they came and set up in the site at the start of the Basin.

I had expected everyone to cook breakfast, so I had brought Mountain House Skillet servings for breakfast.  We all cooked, and it took till about 0900 for everyone to get ready to move.  I had got up about 0615, with Dan up before me.  We were both a bit impatient to start.

The plan was to go up through the Basin, and make the climb up to 12,500' at Twin Lakes were Dan and I would try fishing.  However, we had camped earlier (distance, not time) than expected, and were starting from about 10,750'.  The trail through the Basin was picturesque and with little rise.

As with the day before, Dan and Ken took off at a brisk pace and quickly left us behind.

The elevation rose to about 11,200' at the end of the Basin, about 1.25 miles from our camp.  At that point, the trail split with Twin Lakes to the left and Columbine Pass to the right.  Today, we took the left hand trail to Twin Lakes.  Matt was protecting a painful knee, and both of us were taking it easy for our breathing.  When the trail split, the climbing began.  I don't think the last 1,300' of rise was over more than a mile and a half.  LOTS of steps going up, and it was all steep.  Still, if it had been at 6,000' or below, it wouldn't have been bad.  It seemed unbelievable how long that last half mile took!

Dan and Ken made it up to Twin Lakes in about 2.5 hours.  The three of us took 4 hours, but we did stop for lunch--and lots of breathing breaks.  In all honesty, the trail was very well built and not really challenging from a footing perspective.  Though there were a few spots you had to be careful, and you didn't want to lose your balance.  The views were fantastic!

When we got over the ridge and to the small Twin Lakes, we found Dan with his fishing pole.  His orange shirt made him easy to find.  Turns out he had wandered most of the way around the lake and never got a nibble on his fishing line.  So I didn't even pull out my pole.

Ken wasn't at the Lakes.  He had joined up with Tom, a thin, fast hiker from the East Coast, and they went on up to Windom peak.

We took some photos, had a snack, and a short rest, and then started down by about 1:15 pm.   Dan and Steve had done some high mountain hiking before and were expecting showers and possible lightning between about 3:00 and 5:00 pm.  And none of us wanted to be on those steep rock steps and the climb down in slippery rain.

Of course a group of about 10 climbers decided to leave the Lakes and start down just after we took off.  So we had to wait for them to go by.  Dan took off like a rocket (I really think he hates those storms), and even passed the large group when they stopped to chat and blocked the trail for us.

I followed Matt down.  He was going very slow, favoring his knee, and sliding in the sand on the rocks.  I was sliding a bit too, but not as much.  When Steve stopped for some water, I kept going and left Matt for Steve to watch for the rest of the return.  At that point, I took off as fast as I could.  The clouds were getting pretty threatening.

I could go at almost my full speed going downhill or on the level.  It was only significant uphills that seemed to result in my out-of-breath condition.  I got down to the basin and maybe 3/4 of a mile from camp before the rain and hale hit, and I had to put on my rain gear.  The thunder and rain started about 2:00 pm. 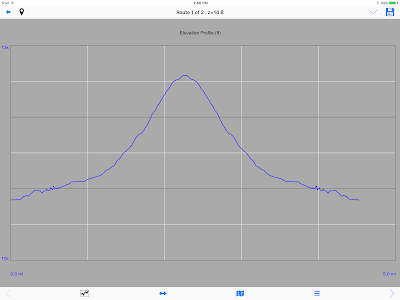 The storm only lasted until I got to camp.  Dan hadn't made it either, and his poncho was out on a bush.  We all got into tents (or under tarps) for a while for a few intermittent sprinkles.  When I got bored laying there and watching the rain drops and bugs on the top of my tarp, I hunted for my electronics bag.  It had somehow gotten to the bottom of the pack underneath my compactor bag that I use to protect my down quilt and jacket.  So I started charging my watch and phone.  After I heard the guys talking for a while over at tent-central, I got out and went over.

After a bit, the sun came out, and we put our rain gear out in the sunlight to dry.  Ken hadn't made it back yet.  By about 4:30, I decided to fix dinner so I would have some time to arrange things at my tarp.  I also wanted to get back to my trail habit where I ate and drank my fill of water before six.

I find that if I stop drinking water by six, I can take a leak before going to sleep and last till morning.  Getting out of the quilt and zipped up bivy at night to take a leak is a real pain.  Plus, you generally need to put your (often) wet shoes on over your clean sleeping socks.  That first night, I drank water late, and had to get up twice.  I didn't have to get up any other night while I was there.

By 5:00 or so, some of us were getting a bit worried about Ken.  He hadn't returned from his trip to Windom.

Ken finally made it back to camp about 6:00 pm.  He said some other hikers had given them advice about going around some snow areas, and they had made a time-consuming, unnecessary detour towards Jupiter.  He also mentioned that they left the poles and packs to scramble the last 300 meters of the climb.

Ken said the hale had started while they were at the peak, but by the time they reached the treacherous steps down from Twin Lakes, the precipitation had stopped and the stones were dry.  He also mentioned the lightning had not been close to their position.

We talked about options for the next day.  One hiker had mentioned that he had gotten to Columbine Pass and seen fish jumping down in Columbine Lake below the pass.  So Dan's suggestion that we try Columbine Pass the next day was quickly accepted.  That hiker also mentioned he did not go down to the lake, because he didn't want to have to climb back up to the pass.

Before closing for the day, I will mention my food.  I brought Mountain House Skillet for breakfast, then peanut butter, jelly and tortilla for lunch.  My snacks were chocolate covered raisins, Fritos, Snickers bars, and Builder Bars (didn't touch those).  For some reason, no one else seemed to snack on the trail during the day hikes (I found out later at least Steve was snacking on the go without stopping).  My dinners were Mountain House beef stroganoff, protein 'shakes', and freeze dried fruit.  I took 1.5 servings of stroganoff for each dinner.  I should have stuck with a single serving.  The 'shakes' were two scoops of whey protein isolate, and two heaping tablespoons each of Ovaltine chocolate malt and dried milk.  The fruit was either dried bananas or peaches.  I didn't go hungry, but the size was a bit large.  Also, I didn't take a variety of dinners, and that was a mistake.  I like stroganoff, but after three dinners, I swapped my fourth with an Alpine Air that Dan had.  The Alpine dinner was a double serving, and I almost couldn't finish it!

When I went to bed, I still hadn't found my retainers.  I was hoping they would still go on after several days without them!

By the way, the feet and muscles were doing fine.  I even made it back up the hill after getting water without stopping to breathe.  The first night, I had to stop and rest on the way back up.

As usual, I'm posting the better photos here at the end of the post.  Here's Ken and Dan in Chicago Basin near our camp. 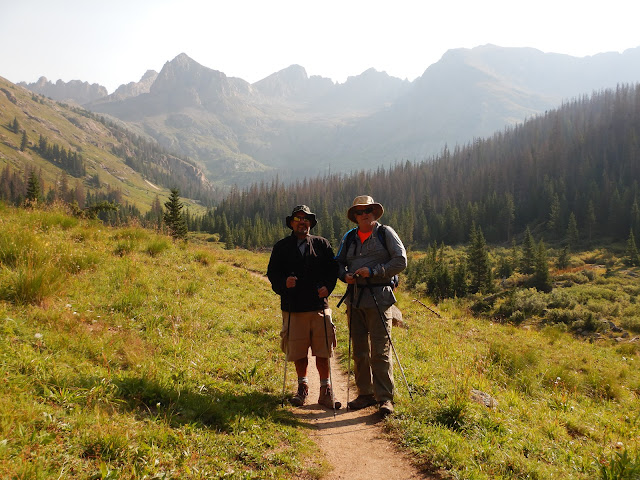 And here's Matt and Steve... 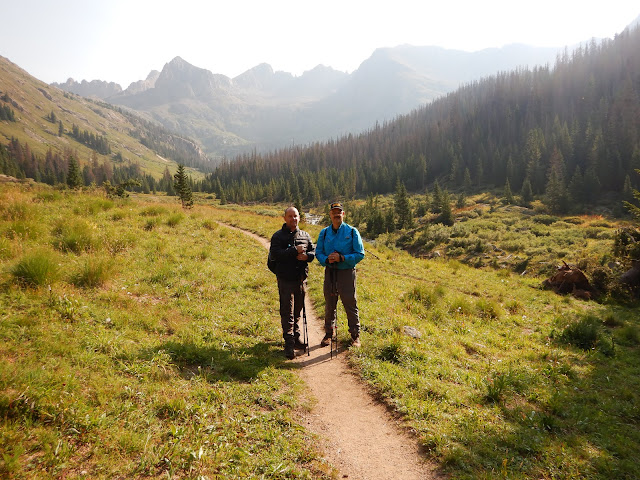 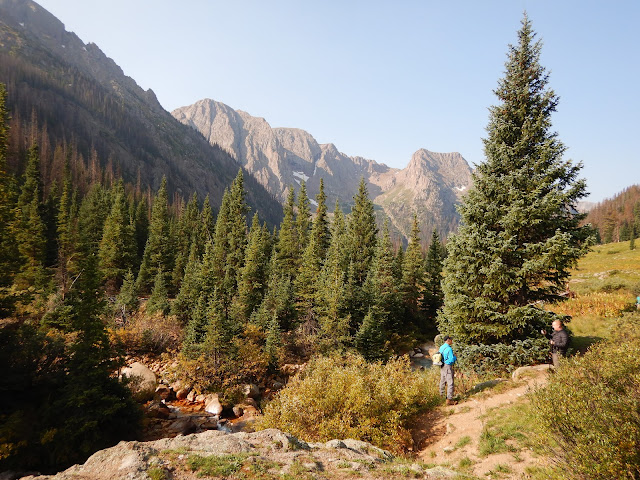 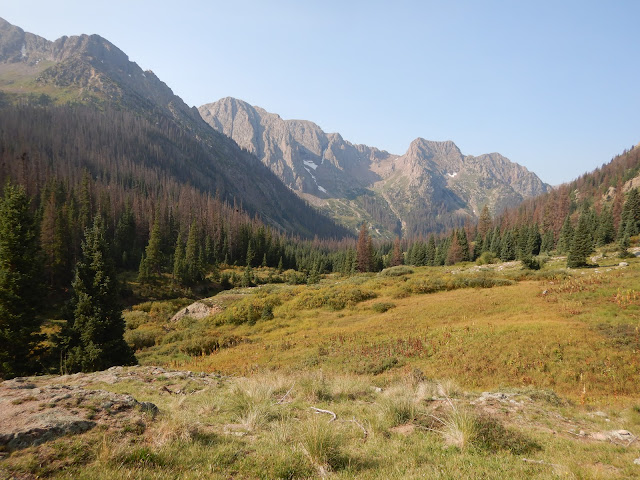 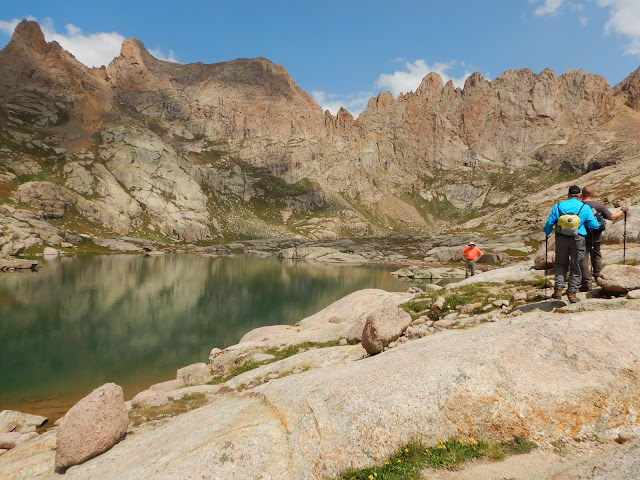 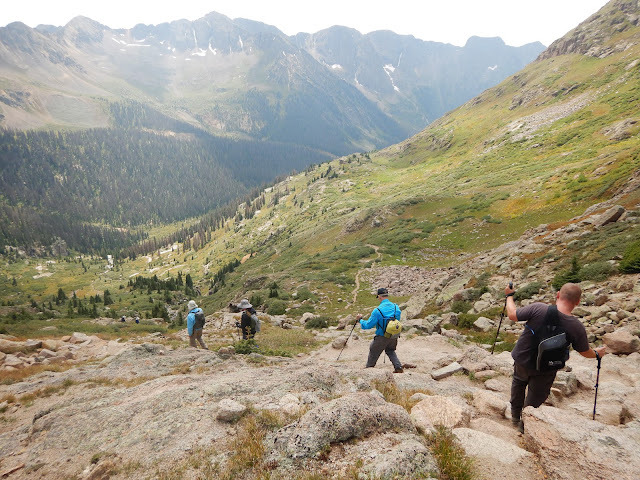