While I was hiking the CDT this year, they announced fire restrictions for several national forests.  Essentially, they allowed only the use of stoves with on/off switches.  I believe the intent was only to allow canister stoves with the standard twist control to open and close the gas valve.  Since I have used only alcohol stoves for the past few years, this was a big impact to my backpacking.

Well, I ordered a Soto Micro Windmaster and planned to buy a canister while on the trail.  My knee injury and return home left me with a Windmaster, but no immediate use for it.  A few days ago, a friend sent me a link to the BRS-3000T stove that is only 26 grams as opposed to the 68 gram (2.4 oz) Windmaster.  The BRS was about $17, the Windmaster about $70.  Because of the low price and weight, I couldn't resist ordering a BRS.

This post provides a rough assessment of the relative performance of the two burners and some of their potential pros and cons.

Here's a picture of the two burners. 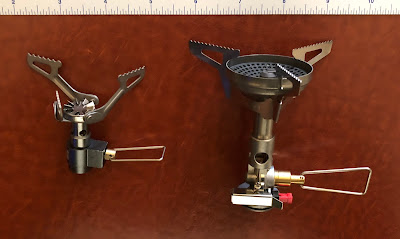 As you can tell, in addition to being heavier, the Windmaster is significantly larger.  It also has a built in spark generator to light the stove.  And it has a broader base that mates more securely with the valve stems on canisters.

On the other hand, the BRS is titanium.  Its burner head is smaller (and cools down a lot faster).  And the pot support limbs are permanently attached (hinged) to the unit.

Here's a picture of the two burners broken down and ready to pack. 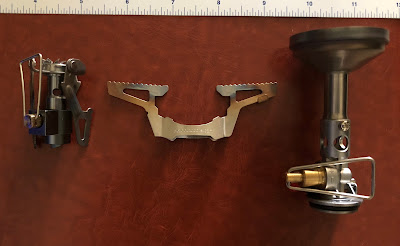 This morning, I wanted to see if the performance of the two burners was comparable.  I started with an old (2014) Jetboil Jetpower Isobutane / Propane 100 g fuel canister.  I had used it for an 8 day hike with a Jetboil Sol Ti stove back in 2014.  After which, I decided to lighten my pack load and switched to alcohol stoves.  I used the Jetboil for about 13 meals, and had used 37 grams of fuel.  That was about 3 grams of fuel per meal.  I only boil water for reconstituting freeze dried meals, so it was about 3 grams to heat a cup of water.  The Jetboil was very efficient!  But relatively heavy.

Anyway, the canister still weighed about 163 g with fuel; 100 g would be the empty weight.  So the performance today was with an old, partially filled canister.  The temperature out was in the lower 80's.  The altitude was about 1200'. The test was outdoors and the wind was negligible. The water I used was probably about 70 F, as this is south Texas and it came from the tap on a well system.  My pot was a light titanium Toaks 550 ml pot/cup with a lid that I believe is 90 mm in diameter--its just big enough to hold the small canister.  The lid has 3 small holes to let out steam.  The pot weighs 2.54 oz with the lid.

I tested the Soto Micro Windmaster first.  I lit the stove, immediately put the cup on the stove (with water and lid on), increased the gas burn rate, and waited till I saw steam coming out of the holes on the lid.  I took the lid off and observed a rolling boil.  This is the same procedure I used for the BRS burner.  I saw steam after about 1 minute and 50 seconds.  The boil used about 6 grams of fuel.

The second run tested the BRS.  In that test, the steam happened at about 1 minute and 55 seconds. I tried to adjust the burner to the same level--by sound. The boil used about 7 grams of fuel.  However, the boil did not appear as energetic as it did for the Windmaster.

Here's what the BRS burner and pot look like configured with the canister. 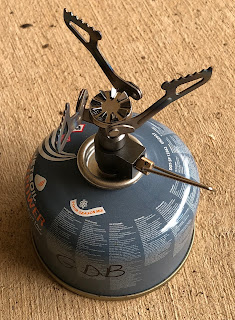 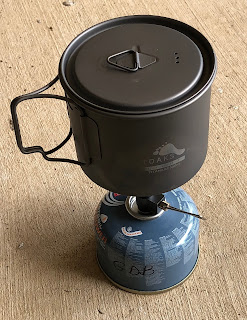 But I don't think performance is everything.  Let me explain...

First, attaching and detaching the burners.  The BRS caused a longer hiss (escaping gas) during attachment than the Windmaster.  But the Windmaster made a little pop on disconnecting that appeared to be due to a slight vacuum around its wider base seal.

Related to that is the fact that the BRS requires the valve to be open an eighth of a turn in order to rotate the support limbs down for packing.  When I first attached the burner to the canister, I thought I had a bad seal as I still heard gas.  Then I realized I hadn't fully closed the valve.  You will need to remember to re-close the valve when setting up the burner.

The BRS was also a little difficult to deploy.  The pot support limbs have to ALL be rotated (180 deg) up, before any of them can be rotated the final 90 deg into their locked positions.  In the up positions they are loose and it is a little difficult to keep them there until you get the first two locked down.  Then there is the support hinges that may or may not last during a long trip.

On the other hand, I don't know if the one-piece Soto Windmaster pot support will be reliable over long use.  It requires bending the metal supports to an open position, and then closing them again before packing.  I would expect long term stress and failure.

The Windmaster burner took a long time to cool down.  Though the valve stem cooled down pretty quickly.  The BRS was cool to the touch (titanium) shortly after use.  The BRS's quicker cooling might allow you to pack up the stove before your food is reconstituted--if you are just boiling water.

I used a new, smaller pot for this test.  The Windmaster support legs extended maybe half an inch past the pot in each of the three directions.  The BRS support legs did not quite reach the edge of the pot.  Both burners provided adequate support for my small pot.  The Windmaster does have a larger pot support system I can attach with four support limbs.

Obviously, the BRS required an ignition source; I used a match.  The Windmaster did not.  My preference there is for the integrated spark system.

One other thing I noticed during the boils.  The BRS burn sound had a few abnormalities.  Several times it sounded like the burner's fuel burn changed rates.  I couldn't tell whether it was more or less efficient, but each anomaly would last for several seconds.  The sound/burn always returned to the same default rate.  I didn't notice any wind, but the BRS burner is smaller and more exposed.

I cannot tell you anything about whether the Windmaster actually works well in wind.  That's what Soto advertises, but I would be surprised if you can get an efficient boil without a decent wind screen.  You will notice from the picture that the Windmaster's burner includes a curved shell that does not directly expose the fuel ports to the wind.  On the other hand, the BRS makes no such claim.

I would probably not recommend using the BRS if you have a significantly larger pot or intend to cook larger quantities.  However, for a single user, especially one that just boils water, the BRS appears to have a significant advantage in weight and cost without losing any measurable performance.

On the other hand, the Windmaster appears to be a better (stronger) quality build.  It has a better canister seal.  It has an integrated spark generator. And its pot support is just a little bit larger.  You can also leave your lighter, matches, or other fire starter packed away during meals.

I looks like I'm going to have to take both for a field test!
Posted by CipherGB at 2:06 PM