Electronics for the AT

I've always been big on documenting, mostly through photography, my vacations.  And I plan to do the same with my thru hike of the AT.  Only this time, I plan to keep both a journal (via this blog) and an extensive photo library.  Unfortunately, the electronics package to do this adds a lot of weight to my hoped-for ultralight base weight.  I could put some of the equipment in clothing pockets, but that's not my preference, and I don't like trying to get around an honest base weight.

For this post, I'm going to add talk about all the electronics I plan to carry.

First, lets talk about cameras.  Traditionally, I've liked and carried full-size DSLR cameras.  My current one is the Canon EOS 7D.  But it weighs 3 lbs 5.2 oz, including a 28-135 mm zoom lens, battery and memory card.  It's just too much for a multi-day, let alone an AT, carry.  Maybe if I was planning to do a professional video or photo product, but I'm not.  I've taken Canon DSLR cameras on vacations to places such as Disney World for years.  But recently, I wanted something a bit easier to stash and protect.  After trying a couple of Canon hand-held cameras, I bought a Nikon Coolpix s8200.  It has a 14x zoom, takes pictures with 16 million pixels, and weighs only 7.5 ounces.  The photos are fantastic, the only problem with the s8200 is that it is not waterproof.  I still have to protect it even in a light drizzle.  AT hiking journals point to a lot of rain.  This just wasn't the ideal camera for the trail.
I put off getting a waterproof camera for quite a while.  Most of the reviews I've read indicated questionable picture quality.  But I finally found a camera where the picture quality was great, and the camera included GPS at a reasonable price.  I now have a Ricoh (Pentax) WG-4 GPS camera.  It's only a 4x optical zoom.  But it has 16 mega-pixels, a digital compass, and GPS with an altitude indicator.  It also has LEDs to do micro-photography down to 1 cm in distance.  It weighs a bit more than the S8200 at 8.2 oz, including the battery and a memory card.  Reviewers say the GPS drains the battery quickly, so I will leave it off.  But the GPS will be there for an emergency.
But no electronics come without accessory requirements.  The Ricoh comes with an 850 mAh battery at 19 grams.  I bought two Halcyon replacement 1500 mAh batteries at 16 grams each.  The camera USB charging cable seems to have a proprietary connector on the camera end.  It weighs 2.1 oz and is long (56") and heavy.  The alternate Halcyon battery charger weighs only 2.5 oz.  On a traditional backpacking trip of less than two weeks, extra batteries would be enough.  On the AT, I'll need to bring the charging cable.  Unfortunately, it doesn't look like there is a lighter weight cable available.

I decided not to bring my Kindle.  But I still wanted something to relax with if/when there is time.  So I found the SanDisk Sansa Clip Sport with 8 GB of memory and a 32 GB micro SDHC card.  This lets me put my music library on the micro SD card, and I can load Audible audio books into the 8 GB of internal device memory.  The device is only 1.02 oz (without ear buds and charging cable).  From the literature, I'm guessing the battery capacity is about 580 mAh.  The Sansa uses a standard micro-USB charging cable, and I was able to find a short one.  The Sansa has a clip that allows it to be connected to a pocket or belt.  It also has a 25 hour battery!

I've used Blackberry, Android and iPhone smart phones.  But after studying OS/phone security plus user capabilities, I settled on the iPhone.  My current phone is the iPhone 5S with 64 GB of internal memory.  The iPhone has a 1560 mAh battery and weighs 3.95 oz. A Lifeproof Nuud waterproof case weighs 1.4 oz. The drawback for the AT is that the phone is AT&T, not Verizon.  I do have a Verizon MiFi (3.14 oz), but I'm not excited about another device and additional weight.  The ATT account is unlimited data, while the Verizon is just several gigabytes. I'm unwilling to give up the unlimited data account, so I plan to stay with AT&T.

For iOS software, I have Guthook's AT Hiker for an AT map and digital AT Guidebook, Gaia GPS for general mapping, Eyefi Mobi for transferring photos from my camera memory card to the phone and then to an Eyefi Internet repository, Web Albums to allow use of Picasa Web Albums on the Internet, Blogger to create and manage posts, USPS Mobile for mail drops, Kindle for reading eBooks, Compass, and Mag Light Pro.  I have a variety of other apps for travel and content creation and viewing.

The iPhone doesn't have a user replaceable battery, but you can turn off functionality, put it into airplane mode, and basically minimize battery usage.  However, I'm only going to be able to conserve battery in a limited fashion.  I want to journal and use the AT Hiker daily.  The iPhone uses a Lightning USB cable, and I have one that's a few inches long. 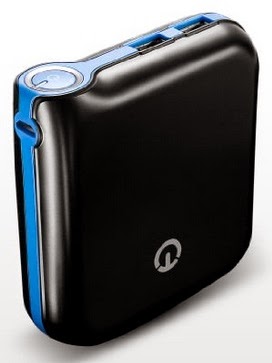 Although I have a small solar charger, everyone says that the 'long green tunnel' of the AT makes a solar charger inefficient.  So I plan to take a New Trent 12,000 mAh external battery with two USB ports.  The New Trent uses a standard micro-USB charging cable, and I have a short one.  It is not waterproof, but I didn't want to add waterproofing weight to what already seems like a brick--9.63 oz.  I'm not really a sociable person, so I don't expect to go into town too frequently.  If I was expecting frequent town stops, a smaller external battery might have been better.

So I'm covered between towns.  But I still need a way to recharge the external battery and potentially the other devices when I get to an outlet.  For that I have an Anker 20 Watt, 2-port USB wall charger.  It has IQ technology to allow charging of all devices.  And each port can support up to 2.4 amps.  The Anker wall charger weighs 2.29 oz.

Here's what the various devices and cables weigh in summary:


This is almost two pounds!  As I said, this will make achieving Ultralight almost impossible.